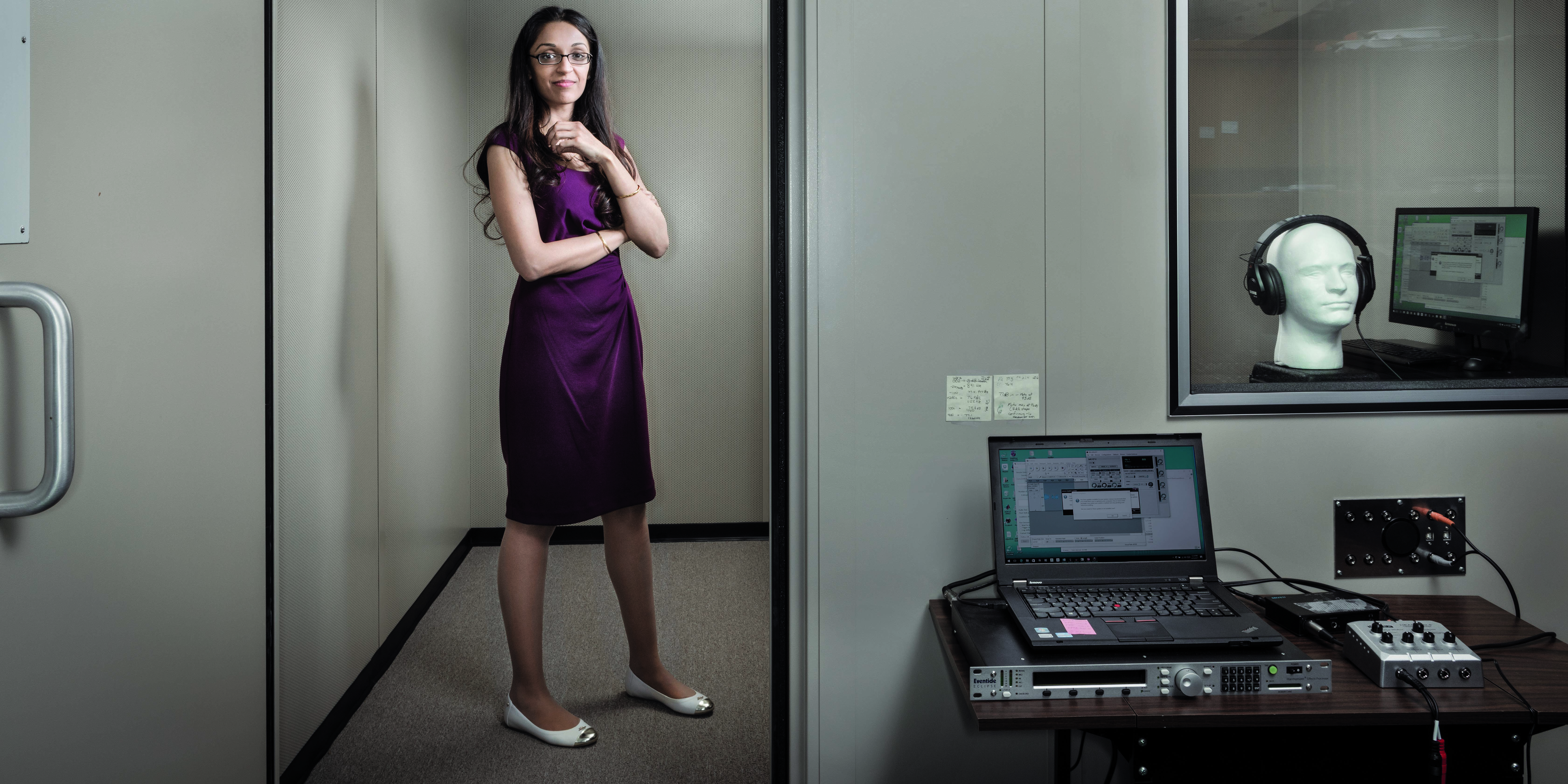 If Sona Patel’s research continues as she expects, soon doctors — and even patients themselves — may be able to detect Parkinson’s disease using a simple voice test.

An assistant professor in the Department of Speech-Language Pathology, Patel is already several years into her quest, having landed a three-year, $380,000 grant from the National Institutes of Health in 2014. She’s still in the testing phase, but says the results have been promising so far.

When a person has Parkinson’s disease, it not only causes tremors, muscle stiffness and loss of balance, it also affects speech. “People with Parkinson’s will often speak in a quieter voice, and it may sound breathier,” Patel says. “Volume is a big concern for spouses and family members, because they can’t hear them. It makes communication really hard.”

Patel, who serves as director of the University’s Voice Analytics and Neuropsychology (VAN) Lab and who collaborates with colleagues at Hackensack Meridian Health, is looking into why those speech changes happen. She hopes the information will help her develop tools that can detect the neurological disease simply by examining someone’s voice. Ideally, she says, a test could take the form of a smartphone app.

The goal isn’t to replace neurologists, but rather to offer an early and noninvasive test that general practitioners could use in their offices or that patients could use to screen themselves at home. If the voice test indicates possible Parkinson’s, a specialist referral and higher-level tests would follow.

“No one goes in to have a routine MRI or a routine spinal tap,” Patel says. “But if you had something that was cheap, noninvasive — hey, why not try it?”

Patel grew up in Illinois and says science and math were prized in her house. Her father is a physician and her mother, who holds a master’s degree in chemistry, manages his medical practice.

As an undergraduate at Boston University, Patel switched from a biomedical engineering major to electrical engineering. But just before her senior year, a summer research job got her hooked on the science of speech.

She worked in a lab exploring speech intelligibility — the technology that powers voice-recognition programs like Siri and dictation software. The research applied to people with hearing difficulties, including hearing-aid wearers and those with cochlear implants.

“I really liked seeing that it had a clinical application rather than just a military or speech tech application,” Patel says. Up until that point, she’d struggled to envision how her electrical engineering work could directly affect people.

Patel enrolled in a communication sciences and disorders program at the University of Florida and earned her Ph.D. there in 2009.

In her current Parkinson’s lab test, Patel has patients come in and make a long “ahhh” sound while hearing their voices fed back through headphones. She asks subjects to hold the sound steady, but inserts pitch variations in the audio that’s coming into their headphones. The human voice naturally corrects for those errors — so if Patel makes the “ahhh” swoop up, a participant will naturally correct the sound they’re producing to compensate for the discrepancy.

Patel has found that people with Parkinson’s disease overcompensate when they hear the voice errors, and she thinks that’s because the disease reduces their ability to control their voice.

In an even newer set of findings, Patel has discovered that people with Parkinson’s take longer to respond to the pitch errors than those who don’t have the disease.

Outside of her own research, Patel teaches several courses at Seton Hall — graduate, undergraduate and online — and says guiding students gives her work even deeper meaning.

“It’s the same kind of feeling you get when you do research to help improve the lives of patients or people with disorders,” she adds. “You teach someone and see their face light up when they understand what you’re talking about.”