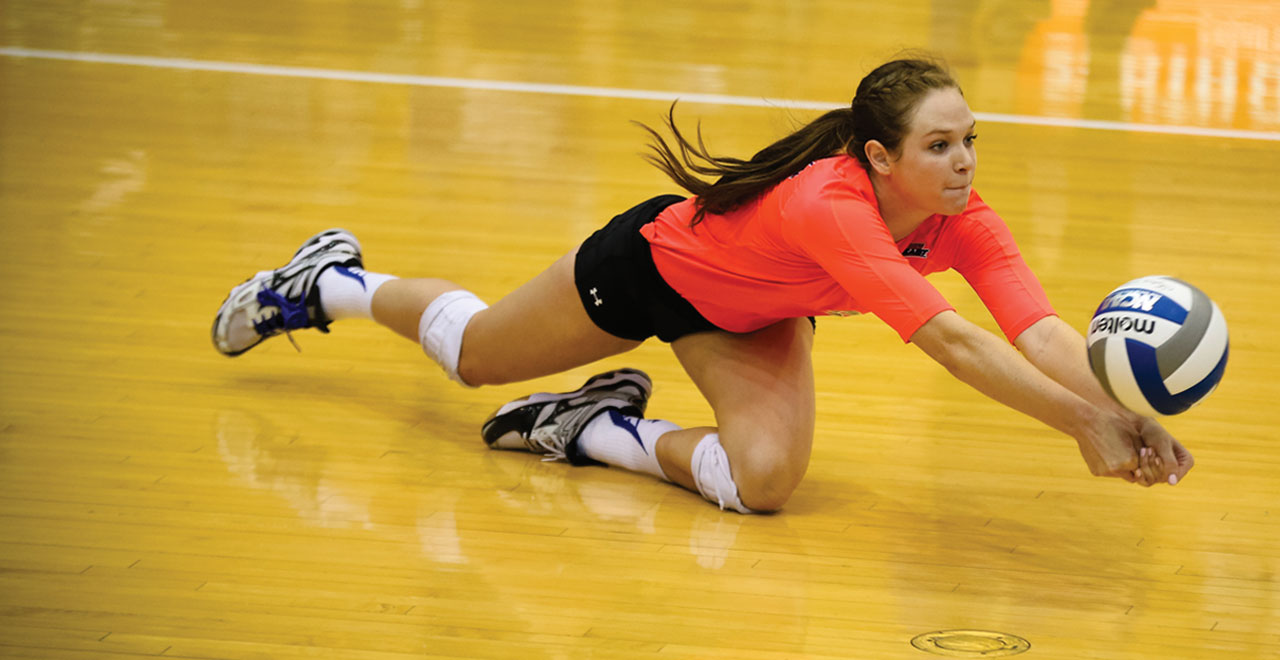 Published April 27, 2016
Above: Junior Tessa Fournier demonstrates the prowess that earned her back-to-back BIG EAST Libero of the Year honors.
Those who aren’t avid volleyball fans may not know what a libero is, or its vital importance to a team’s success. But at Seton Hall, the unique defensive position has been given its due, and the Pirates have nearly perfected it.

“We have made it our goal to excel on defense and produce strong liberos,” said head coach Allison Yaeger. “There are tons of libero and defensive specialist recruits, but being former liberos ourselves, we’ve done a good job of being able to spot the rare standouts.”

A libero is a defensive specialist who is not limited to volleyball’s usual rules of rotation or substitution. She is on the court more than most players, manning the team’s back row, and often replaces the middle blocker or weaker defensive players when that position rotates to the back. Because of her extended court time, she is often the team captain and vocal leader on the floor. A libero wears a different-colored uniform so she stands out from her teammates.

In each of the last four seasons, a member of the Seton Hall women’s volleyball team has won BIG EAST Libero of the Year. In 2012 and 2013, the honor went to Alyssa Warren ’14. Since then, current junior Tessa Fournier has won the prestigious title in back-to-back years.

So how does a school become so impressive at one position? It helps when its head coach, Allison Yaeger, was an All-American libero while at Wright State. Assistant coach Allie Matters ’10 was a libero at Seton Hall and graduated as the Pirates’ all-time digs leader. The current career digs leader? Alyssa Warren. Fournier ranks third, right behind Matters.

Clearly, in a relatively short period of time, the program has built not only a reputation, but a tradition of excellence at the position.

“We try to find players that were similar to ourselves, in mannerisms, skill and leadership,” Matters said. “I remember when I was recruiting current sophomore Sarah Kenneweg. I was walking out of the gym and I saw her fly across the floor … really sacrificing herself, and I was like, ‘I want that kid.’ Recruiting that position comes easy to us, and fortunately it has paid off.”

The libero is often the unsung hero for a successful team. Offensive players, responsible for scoring points with a timely block or a thunderous spike, typically garner the majority of praise for a team’s success. The Pirates, however, understand that without a reliable defensive back row, offense would be impossible.

“We understand that the libero and defensive players are the underdogs,” Yaeger said. They’re not in the spotlight; they rarely get the credit for a big point. That’s why we go out of our way to celebrate the big dig or the perfect pass, just as much as we do the kill.”

“That grit and all-out defense has really been something that’s defined us,” Matters added. “We’re perfectly fine with defense being our identifier.”

Next season, Fournier has an opportunity to achieve an honor that so far has been accomplished by only one player in BIG EAST history: to win Libero of the Year honors three times.

“The coaches have taught me how to be a leader on and off the court,” Fournier said. “They have given me so much advice on how to become a better player and improve my volleyball skills. I would not be where I am without them.”