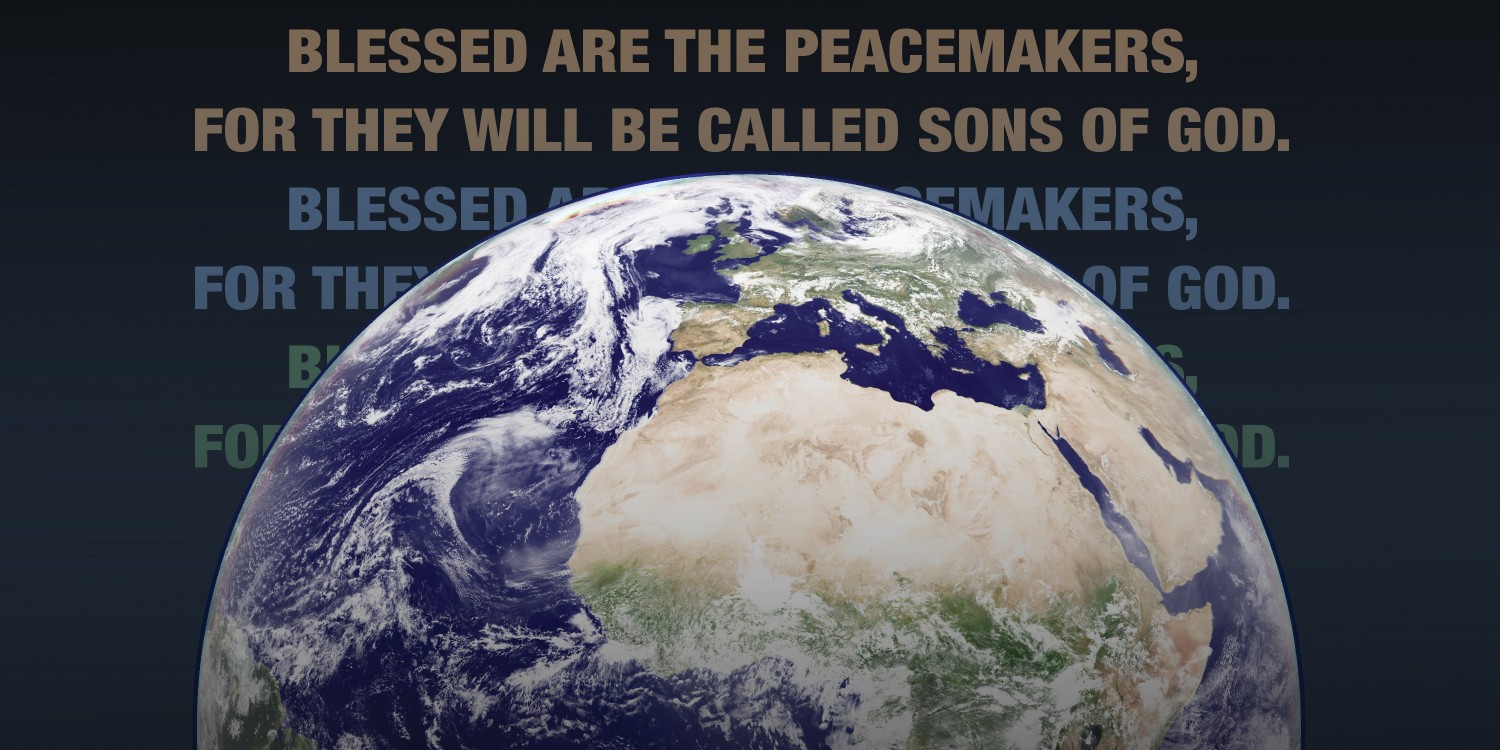 Faculty at the School of Diplomacy and International Relations do more than teach about conflict resolution and reconstruction in the classroom. They actively engage in the process of fostering and maintaining peace abroad.

Over the past four decades, Andrea Bartoli, dean of the School of Diplomacy and International Relations, has worked to foster peace all over the world.

But it was his first participation in the peace process in Mozambique that left an indelible mark. The journey that would take Bartoli to the southeast African nation numerous times began in Italy in the 1970s.

While still a teen, he joined the Community of Sant’Egidio, a group of Catholic individuals committed to spreading the Gospel and serving the poor. When a Mozambican priest living in Rome told them about his struggles with his country’s government, the group decided to intervene, even though its members had no formal experience in conflict resolution.

By the time Sant’Egidio had brokered an agreement between the government and the Catholic Church, Mozambique was in the midst of a bloody civil war. During the course of the 16-year conflict, more than a million people died. Sant’Egidio’s work in the country gave them access to some of the key players involved in the conflict, and the group began listening and talking with both guerrilla leaders and government officials.

By 1990, the two sides had agreed to meet in Rome. After two years of difficult negotiations, the parties finally signed a peace agreement. Bartoli served as a liaison between the mediation team, Sant’Egidio and the United Nations.

“The experience of the Mozambique process is certainly a watershed in my life,” he says. “Seeing the emergence of peace in a country that had been racked by war for more than a decade was like seeing the sunrise for the first time,” he says. “I took away from that an awe for the creativity of the human spirit,” he says. “What I saw is something that I hope to see replicated many times over.”

Bartoli, who joined Seton Hall in 2013, is just one of nearly a dozen faculty members working to foster and maintain peace abroad. Together these scholars have helped make the School of Diplomacy and International Relations one of the top programs for conflict resolution, peace building and reconstruction.

And that specialization continues to grow. Last year, the school launched a new Center for Peace and Conflict Studies and added a graduate certificate in post-conflict reconstruction and sustainability.

Bartoli points out that people need not only to build peace, but also to learn from their successes and mistakes. He hopes the center will foster this reflection. “That is a wonderful role for the University, to be a repository of this understanding, to be a place that humanity can think about the past and learn from it.”

In Mozambique, it’s easy to pinpoint the beginning and end of the conflict. But not every dispute has such clear boundaries.

Zheng Wang, an associate professor at the school who directs the new peace center, grew up in China, a country long embroiled in a variety of conflicts at home and abroad, including a decades-long dispute with Japan.

This isn’t a simple quarrel over territory or natural resources, however. It goes much deeper: The conflict has become part of the countries’ identities. A 2013 survey found that nearly 93 percent of Chinese respondents had an unfavorable view of Japan, and 90 percent of Japanese respondents had an unfavorable view of China. “It’s like two neighbors who don’t like each other,” Wang says. “They may see any behavior from the other side as threatening.”

The seeds of mistrust were sown more than 80 years ago, when Japan occupied China’s northern province of Manchuria and began expanding its reach. In 1937, the frequent border skirmishes between Japan and China became a full-blown war. This year marks the 70th anniversary of the end of World War II; yet the ghost of war still haunts international relationships in East Asia. The historic issues are still the major barriers for the normal relations between Japan and China, and Japan and South Korea. “They haven’t ever realized reconciliation,” Wang says.

These kinds of identity-based conflicts can’t be resolved through simple negotiations. Instead, you have to work to change people’s perceptions, Wang says. His own views didn’t begin to change until he started visiting Japan and making friends there.

To help bring about this change, Wang and colleagues at George Mason University and the Woodrow Wilson International Center in Washington, D.C., held a conflict- resolution workshop in 2013. They invited a handful of influential scholars from Japan and China to Virginia.

During the closed-door session, Wang and his co-facilitator asked difficult questions in an effort to get the two sides talking. “We were trying to encourage them to conduct some meaningful conversation.”

In March, Wang facilitated a second round of talks and expanded the dialogue to four parties, with scholars from South Korea and the United States joining in. (He hopes to hold many more workshops in the coming years.)

Peace building is a long process, but over time these discussions can help participants understand each other better. “Each of them can become a source of new information, new ideas, new thinking,” Wang says. “We are planting seeds for peace.”

Assefaw Bariagaber, a professor at the school, grew up in the Horn of Africa amid a very different kind of conflict. When Bariagaber was growing up, his home country of Eritrea was struggling to gain independence from Ethiopia. The war, which lasted three decades, claimed the lives of tens of thousands of civilians. Many more Eritreans fled, becoming refugees.

“There was hardly any family that was not affected by war,” he says. “I think it touched almost everyone’s life.”

When the conflict ended in 1991, many expected the refugees to come flooding back into the country, but the mass repatriation never occurred. Bariagaber, who had just completed his doctorate in political science, began thinking about the factors that influence the movement of refugees.

Today, Eritrea is peaceful and stable, but Somalia, its neighbor to the south, is locked in a brutal civil war that prompted more than a million people to flee. Several years ago, when Bariagaber was on sabbatical, he traveled to Somalia as a consultant with the International Organization for Migration. The organization had asked him to interview Somalian refugees in Kenya and Ethiopia to gauge their willingness to return to Somalia. First, however, Bariagaber stopped in Mogadishu, Somalia’s capital.

“Seeing the emergence of peace in a country that had been racked by war for more than a decade was like seeing the sunrise for the first time.”

On his second day there, fighters from the Islamist militant group Al-Shabaab attacked the U.N. compound where Bariagaber was staying. When the fighting began, he was in his room conducting interviews. His companions tried to reassure him that the fighting was outside the compound walls, but he knew better. “I could hear the closeness of bombs and the guns,” he says.

For an hour, the men lay on the floor in the dark, listening to the sound of grenades and gunfire. After the attack, which left more than 15 people dead, Bariagaber had to decide what to do — cut his mission short and return to the U.S., or continue on to the refugee camps. “I told them I would not go to the refugee camp in Kenya, but I would go to refugee camps in Ethiopia,” he says.

Bariagaber conducted focus group interviews with the refugees in Ethiopia in an attempt to gauge their willingness to return to Somalia once the conflict has ended. The men and women seemed prepared to return, but they were, not surprisingly, worried about security. It was a concern that Bariagaber understood all too well. At that time, many of the regions from which these refugees had fled were still controlled by Al-Shabaab. Since then, some have returned home, and the Somali government seems willing to welcome others.

But Bariagaber points out that the war has left many refugees with nothing. “You don’t simply transport them back, even if you can guarantee the security,” he says, adding that the international community must be prepared to support those who wish to return for at least a year or two, until they can begin to rebuild their lives.

The end of a conflict doesn’t necessarily mean the end of a country’s problems. In Sierra Leone, on the other side of the African continent, the civil war ended in 2002. But then the country had to begin the enormous task of rebuilding what had been destroyed.

After the fighting stopped, international aid organizations flooded in to assist, and many of them focused on strengthening democracy or rebuilding infrastructure. “A lot of money was flowing into Sierra Leone, but it was really hard to see what the impact of these funds was,” says Fredline M’Cormack-Hale, an associate professor at the school.

M’Cormack-Hale, who was born in Sierra Leone, set out to determine whether these activities were having an effect. She examined the impact of organizations that worked to promote democracy as well as the impact of those that worked to promote development. She found that Sierra Leoneans who experienced both types of aid had a better understanding of democracy, but also felt more dissatisfied, since the aid organizations had given them high expectations, but those expectations weren’t being met. Community members now knew who to talk to if the road they were promised hadn’t been built, but this knowledge didn’t seem to speed up construction. “There was no connection between increased civic participation and improved outcomes,” she says.

That disconnect still exists. In 2010, Sierra Leone implemented free health care for pregnant women, new mothers and young children. When M’Cormack-Hale examined how the program was being implemented, however, she found major pitfalls. Some unscrupulous health workers and pharmacies still charged women for their visits and medicines despite the national mandate.

M’Cormack-Hale also discovered that health centers simply didn’t have enough beds, equipment and doctors to go around. The promise of free health care is a noble goal, she notes, but when the government can’t deliver the services it promises, dissatisfaction only increases. “You need to make sure that people feel the state is doing something for them,” she says.

The picture isn’t all bleak, however. Civil society groups are increasingly coming together to hold government accountable and help with development efforts. When the Ebola epidemic struck the country last year, for example, a consortium of women’s groups began fundraising to call attention to the gender bias of the disease, as well as to help in relief efforts and health promotion. They provided financial and other support to orphans and the families of Ebola victims. They provided food to the families trapped in isolation. The group also set up hand-washing tanks to prevent the spread of the disease.

“I think this is just a beautiful example of local action,” M’Cormack-Hale says, a demonstration of Sierra Leoneans’ love for their country and the abiding belief among many that they can do things themselves. She thinks the Ebola epidemic has served to bring the country together. “I believe this can be a potential positive turning point for Sierra Leone,” she says.

M’Cormack-Hale and her Seton Hall colleagues have a wide variety of interests and specialties, but they all share a common goal: building peace through deeper understanding. It’s a goal befitting a Catholic university, says Monsignor Richard Liddy, director of the Center for Catholic Studies at Seton Hall. “It’s all about finding the elements that, on a very human level, link us together,” he says.

Cassandra Willyard is a freelance writer in Madison, Wisconsin.