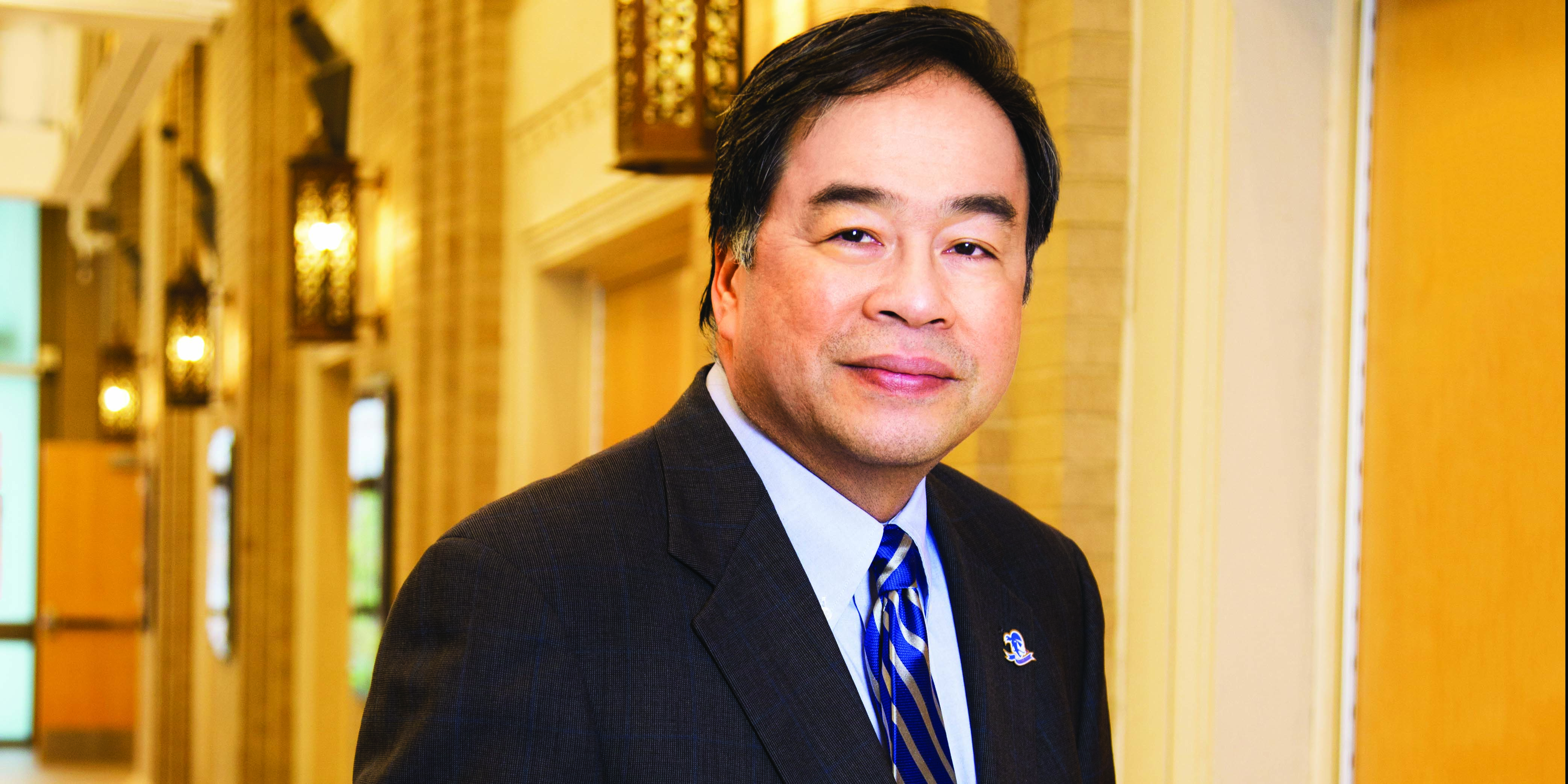 When the Welcome Center now rising from the parking lot near Seton Hall’s main gate opens early next year, it will be the first stop for prospective students visiting the campus — a place where the University can better tell the story of what it has been, what it is now, and what it is becoming. It will house the admissions office, a gallery, an event space and underground parking in a three-story building whose design is meant to echo Presidents Hall.

This construction and other recent building projects were all initiated by a man with a clear vision for the future: A. Gabriel Esteban.

Starting this fall, Esteban will become the first lay president of DePaul University in Chicago. Esteban leaves Seton Hall on solid footing; the University has seen substantial growth during his tenure. The number of students is up, and so are their SAT scores. The number of students chosen for prestigious academic awards such as Fulbright, Pickering and Boren scholarships rose to historic heights. New academic programs have been added, as well as new campus buildings, while old ones have been upgraded. More graduates are joining alumni clubs and donating to their alma mater.

“One part of me says, ‘It would be great if you could be here for that,’ but another part of me says, ‘It’s time,’” Esteban said. “I think it’s healthy for an institution to have a change in leadership. The only question I ask myself is, ‘Is it a better place because you were here or not?’ and if you can answer in the affirmative then that’s a great place to be, and hopefully I did have some role in making a difference at Seton Hall.”

When Esteban took office, economic headwinds were strong. “We were in the depths of probably the greatest recession since the Great Depression, and it impacted this region probably more than any other because the financial industry took the brunt of it, and this area is very dependent on that sector of the economy,” said Esteban, who had been serving as provost when he was named interim president in July 2010. He was appointed Seton Hall’s 20th president in January 2011.

The fall 2011 freshman class size was 986, down about 200 students from the average freshman enrollment in the preceding years. “Against that backdrop the question was, ‘What do you do?’” Esteban said. “What we could have done at that point was cut, cut, cut, and that’s a natural inclination. But there are two ways to look at a situation like that — you either cut your way out or you grow your way out, and cutting is a cycle.”

The first way to grow was to attract more students, which the University did with its public tuition rate program. The program offered select students a private education at a rate comparable to public schools. “It was a pretty bold decision, and it didn’t take long to make it, once we worked out how much it would cost per student, and how many students fit that profile,” he said.

“It puts front and center what the cost of a quality private education is even before you apply, making transparent something which is sometimes opaque, plus it was close to the profile of the student we thought would benefit from a Seton Hall education. So that following year we had 1,453 freshmen, which was the largest class in our recent history.”

The growth in the number of undergraduate students — 15 percent more now than in 2009 — has been matched by a growth in student academic success. Admission is more competitive (with a 67 percent acceptance rate this year, the lowest in school history). The average SAT score has risen from 1050 to 1153, and the four-year graduation rate is 60 percent, the highest it’s ever been. The number of students from outside New Jersey has climbed to almost 40 percent — California is now the University’s biggest out-of-state market after New York.

“We hear it from our faculty, that it’s easier to teach once you know you have a nice bell curve of students, and you can teach to the middle,” Esteban said. “But one of the things I worried about was how would this impact the diversity of our students, and I say ‘diversity’ in all aspects.”

Seton Hall has traditionally offered a ladder into the middle class for students whose families have never sent anyone to college before. “When I meet our more senior alums, they often start with the phrase, ‘If not for Seton Hall, I would not have …,’” he said. About a quarter of the students now are first-generation college students, and a similar percentage of them are eligible for Pell grants. About 45 percent identify themselves as students of color, and more than two-thirds are Catholic.

“We wanted to raise students’ academic profile but we also wanted to be true to our mission — the first generation students, the diversity,” said Alyssa McCloud, M.A. ’01/Ph.D. ’09, vice president for enrollment management. “The rate at which we grew our selectivity, our SAT scores, and still managed to grow the class size and keep diversity — it’s pretty rare that a school is able to do all of that.”

The second way to grow was to update what the University had to offer. “The recognition back then was that we had to invest in the quality of life for the students,” said Patrick Murray ’64/M.B.A. ’72, chairman of Seton Hall’s Board of Regents.

A fourth floor and a new wing for Aquinas Hall, and renovations in other dorms; an expanded parking deck; a new classroom building to replace Stafford Hall; a Dunkin’ Donuts shop on campus; a new fitness center; upgraded athletic facilities and improved athletics dressing rooms, with individual lockers for all varsity sports — the face of the campus has changed.

What went on inside the buildings changed, too — a new College of Communication and the Arts; a new department of Catholic Studies; more investment in particularly strong departments, including accounting and finance, chemistry and biochemistry, history and international relations. The University rose quickly from 136 to 118 in U.S. News & World Report’s annual rankings.

“Certainly the emphasis on the mission of the University was one of the hallmarks of what Gabe did,” Murray said. “I think the mission is the same but I think the University today is in a much different place. It’s much more nationally known and we have some international recognition today.”

And the biggest change of all is what’s happening at the old Hoffman-La Roche complex in Nutley and Clifton — the campus where the new medical school will join the School of Health and Medical Sciences and the College of Nursing in a new, more collaborative, interdisciplinary way of training medical professionals.

“It was very clear in the conversation with him that the kind of medical school that I would be interested in — that is, one that would be training doctors to be delivering care so that everyone, regardless of their race or socioeconomic status, could have optimum health care — was spot-on with his vision,” said Dr. Bonita Stanton, the founding dean of the School of Medicine. “It’s very bittersweet. I’m very happy for him but very sad for us. This was really something that had his personal stamp on it.”

The third way of growing Seton Hall was for Esteban to humbly and collegially \ encourage the University to embrace a shared perception of its future.

“A lot of times in higher education there’s a tendency for institutions to have what I call the unbridled enthusiasm for the status quo,” said Larry A. Robinson, who retired as provost in December, and who has known Esteban since they were faculty colleagues at the University of Houston in the early 1990s. “He was able to come in with an innovative strategic plan and to create involvement and to get that plan implemented with faculty support, and his leadership enabled us to evolve as an institution. It was a collaborative effort involving faculty and staff, all segments of the University community in the development of that strategic plan — the creating of a vision for the future of Seton Hall to make us more competitive and to elevate our prominence and our relevance as an institution.”

Esteban has particularly enjoyed the prominence of the men’s basketball team. He is a longtime fan of the sport and still an occasional player, although he tends to limit himself to free-throw contests when playing against students now.

He wore Seton Hall regalia whenever he traveled, which led to memorable encounters with alumni, including an improbable chance meeting at an In-N-Out Burger in Southern California with William T. Nolan ’55, a member of the University’s Athletics Hall of Fame.

Once every semester Esteban met over lunch in his office with student government leaders. “He was really open to hearing about student body concerns, anything from parking issues to library hours,” said Teagan Sebba, a senior who is president of the Student Government Association. One conversation led to a program that collects for donation the leftover food from University events. “That’s who he is — it was just a very thoughtful thing to do.”

And in December each year, he presided over a ritual that fully embraces the spirit of the University’s Catholic mission: the annual Christmas Tree Lighting.

“I thought, since we spend all this time stringing the tree with lights, why don’t we create a ceremony around it,” he said. “The first year we thought if we had 50 to 70 people show up we’d be happy. About 350 showed up. The following year we thought, well, if we had the same show up we could continue. I think we had about 700 or 800. Now we’re at 2,000.”

“I think the biggest change is in terms of the general atmosphere and the optimism about the future, the sense that if we work as a group there’s a whole lot we can do in terms of possibilities,” Esteban said about his tenure as president. “The most critical decision was the decision to stay the course. There is always the temptation to let budget drive decision-making, but that shouldn’t be the case — you let your goals and objectives drive your budget. Your budget helps you understand what the parameters could be, not what they should be.”

And there is one more small part of the Seton Hall infrastructure that has been upgraded during Esteban’s tenure: the garage of the University-owned house where he lived when he was provost. After he was named interim president, he chose not to move into the president’s residence yet, and he asked for no salary increase. But he did have a request of Kurt Borowsky ’61, who was then chairman of the Board of Regents.

“I said. ‘There is one thing — what about two new garage door openers?’” Esteban said. “I remember there being dead silence, and Kurt said, ‘What’s that again?’ and I said, ‘Can you have them install two garage door openers? The garage has those swing-open doors and the asphalt is not flat, so my wife and daughter have a difficult time opening them because they have to lift them up to go over the hump in the asphalt.’”

At an alumni event this winter, Esteban ran into the alumnus whose company installed the new doors. “I thought, ‘This is perfect,’” Esteban said. “A perfect circle.”