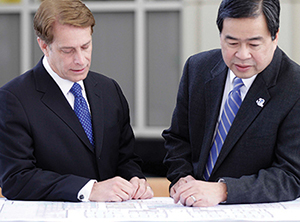 On a recent trip to the Philippines, my wife, Jo, and I shared a chance encounter that reminded me of Seton Hall’s expanding global influence.

We were at the airport in Tokyo waiting for a flight to Manila when she was approached by a man who noticed the Seton Hall insignia on her shirt. He asked whether she worked for the University, which led to a conversation about our mutual Seton Hall connections.
As it turns out, the man’s daughter is a sophomore in our nursing program. He was traveling on business to Manila from his family’s home in Houston. The day after we arrived in Manila, we had the opportunity to dine with a 2008 double graduate from our master’s programs in public administration and diplomacy who was assigned to Manila by a U.S.-based company.

Houston. Tokyo. Manila. All connected through the Seton Hall campus in South Orange, N.J. You never know where you will run into a fellow Pirate or someone who is otherwise connected to Seton Hall. Perhaps you have experienced such encounters as well.
Of course, you need not travel to another country to realize that Seton Hall is a national and international institution in every sense. Students come to us from across the United States and from more than 70 nations. After they graduate, they transport a tireless work ethic and servant leadership skills grounded in Catholic values to all 50 states and a growing number of countries around the world. 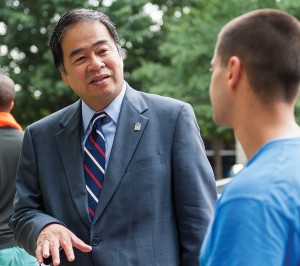 Nowhere is that more evident than in this year’s freshman class. Not only are they the most academically prepared students in University history — whose credentials have set new benchmarks for excellence — but they also represent greater geographic diversity than we have ever experienced. While historically 30 percent of our freshmen are from outside New Jersey, this year more than 35 percent of our incoming class are from out of state. In fact, on move-in day, Jo and I talked to the parents of a young man from Mexico. This geographic diversity is in line with our strategic goal to be recognized as a national Catholic university of choice.
Because more and more Pirates hail from distant ports, they bring a global outlook to their Seton Hall experience that changes the tenor of campus in remarkable ways.

A particular point of pride is our striking increase in recipients of international academic honors. In the history of the University before 2008, students and alumni had been awarded two Fulbright grants. Since then, they have claimed 18 of the prestigious awards, proudly carrying Seton Hall’s name to nations as diverse as India, Colombia and Russia.

Not to be outdone, our faculty continues to win international research grants, visiting professorships and other recognition that is global in scope. In fact, five faculty members received Fulbright awards during the last academic year and, as of this writing, one has already claimed the award this year.

Academic awards are but one of the many ways that Seton Hall makes a global impact. Business executives from Shanghai come to campus to complete our executive M.B.A. program; students study abroad in London, Rome, Tokyo and other leading cities; and DOVE volunteers serve the needy in Haiti and El Salvador, to cite just a few examples.

Expanding the University’s geographic footprint is essential now more than ever. Studies indicate that, due to demographic shifts, the number of high-school graduates will decline in the coming years — particularly in the Northeast and the Midwest — and many colleges and universities will struggle to maintain both the quality and quantity of their student populations. The most ominous forecasts portend that institutions that fail to adjust to this new reality will likely close their doors.

You should know that Seton Hall is bucking this trend. For this fall’s class, while we received 19 percent more applications for admission than the previous year, we admitted only 14 percent more students. In fact, since 2011, our admissions rate has decreased by 14 percentage points. As a result, our two-part SAT average has increased by 80 points since 2009 while the percentage of freshmen ranked in the top 10 percent of their class has increased from 22 percent to 37 percent during the same period.

To continue our forward momentum, the Office of Admissions is placing strategic emphasis on outreach to other areas of the United States. Last year more students hailed from the West Coast (California, Oregon and Washington) than from New England (Maine, New Hampshire, Vermont and Massachusetts).

When our students leave South Orange as fully formed servant leaders, no matter where they choose to live in the U.S. or abroad, the Department of Alumni Relations finds new ways to keep them informed, involved and invested in Seton Hall.

This past February, alumni gathered in 20 cities across the country to cheer on the men’s basketball team during Seton Hall’s National Game Watch event. The evening included more University events in more locations on a single day than ever before. And this fall, top University faculty and alumni experts will join me in eight cities throughout the country as part of a new speaker series, “Voices from the Hall,” sharing perspectives on current issues affecting our world.

It may surprise you to know that Seton Hall has more alumni in Florida (2,878) than in Pennsylvania (2,725) and that more graduates call California home (1,474) than Connecticut (1,119). This speaks volumes about the University’s growing standing and scope. Our alumni have become increasingly involved and have invested in our future with the undergraduate alumni giving rate going up by 25 percent in the last two years and the level of gift commitments increasing by more than 50 percent over last year. We are indeed a university on the rise.

As we strive to advance the University’s stature, both in the United States and overseas, may we be ever mindful — and ever gratified — of the increasingly vital role that Seton Hall plays on the national and international stage.

Our Home For the Mind, Heart and Spirit