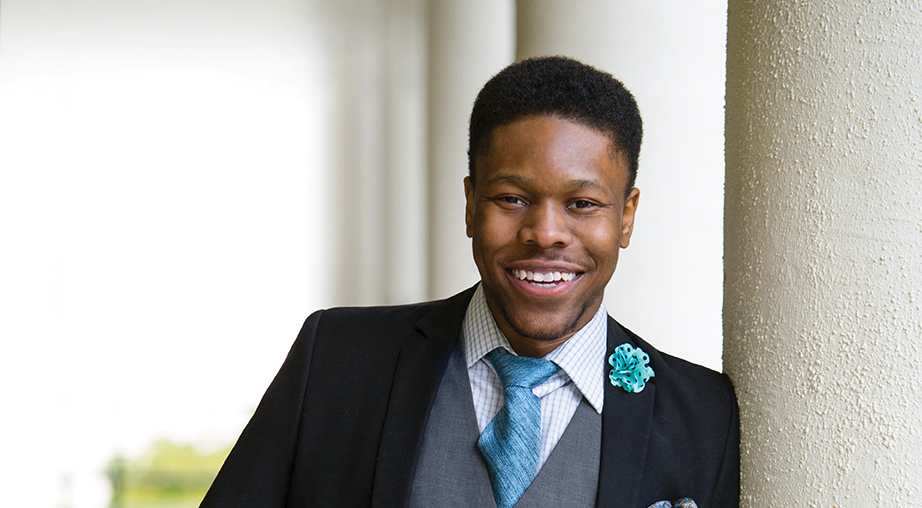 An Ode to Resiliency

Published May 7, 2018
The childhood struggles of Leo S. Ricketts ’18 drive his social advocacy.

In the autumn of his junior year, Leo S. Ricketts ’18 spent three days busking under Seton Hall’s Xavier Hall, playing blues and jazz on his alto saxophone, a donation box at his feet.Beside him stood a mannequin in tattered clothes, holding a list of statistics about homelessness.

Homelessness, hunger and other conditions of poverty are part of the reality of many students’ daily lives, and in his volunteer work as an educator, a mentor and an advocate, Ricketts speaks candidly about the stark realities of economic inequality and systemic oppression. But his dedication to service arises from a deep belief in a connection among all people that transcends social and economic divisions.

“My draw to service came from what I’ve been through in life,” he said. “I’ve been homeless multiple times. We’ve been without food and electricity. I’ve seen domestic violence. I’ve seen people shot and stabbed in my community. I’ve seen drug addiction. I know what it feels like to be on the other side. Going through that, you learn that every person is entitled to dignity and humanity. You want to make things better.”

Ricketts, a history major, involved himself in service throughout his time at Seton Hall. He served as chair of Operation X, a mentorship program for minority male students in Newark-area elementary and middle schools, designing curricula on topics ranging from social justice and active citizenry to “how to tie a tie.” He coordinated international service projects as a Semester at Sea IMPACT scholar. He contributed to a powerful support system through the Black Men of Standard student organization. He has been a leader in advocacy and fundraising for homeless youth.

For these and other contributions to the University community, Ricketts was named one of six recipients of Seton Hall’s 13th Annual Servant Leader Awards in 2017.

“Leo is really the consummate servant leader, in that he came out of a background of adversity but that didn’t make him lesser for the effort,” said Rev. Forrest Pritchett, program director for the Martin Luther King Scholarship Association and a longtime mentor. “Instead, it gave him a sharp perspective on how to equip himself to go further in life, how to help others, and how to go back and serve his community of origination.”

As he looks forward to graduate work in history, education, urban planning and sustainability, Ricketts continues his volunteer work. “My heroes have all been people of service — whether they’re fighting for a community, putting together a lunch meal at a soup kitchen or taking two minutes to teach a kid to tie his shoe,” he said.

He speaks with profound appreciation of the many individuals who have supported him in what he describes as the “continuum” of his educational journey, from his days as an Upward Bound student living in a low-income neighborhood in Newark to his Seton Hall graduation in December. He often worked two jobs to support himself and his family while taking a full course load and contributing many hours to his service commitments. He experienced homelessness and even hunger. Yet from that adversity he has cultivated a connection with mentors, students, colleagues and strangers in need.

He recalled an encounter from the 2016 Semester at Sea program: While coordinating a project in rural Trinidad and Tobago, he led a team of students in painting the home of a woman and her daughter. As they worked side by side, he spoke with the woman, trading stories of her life and of his experiences as a young black man in America.

Tricia Brick is a New York- area based writer.