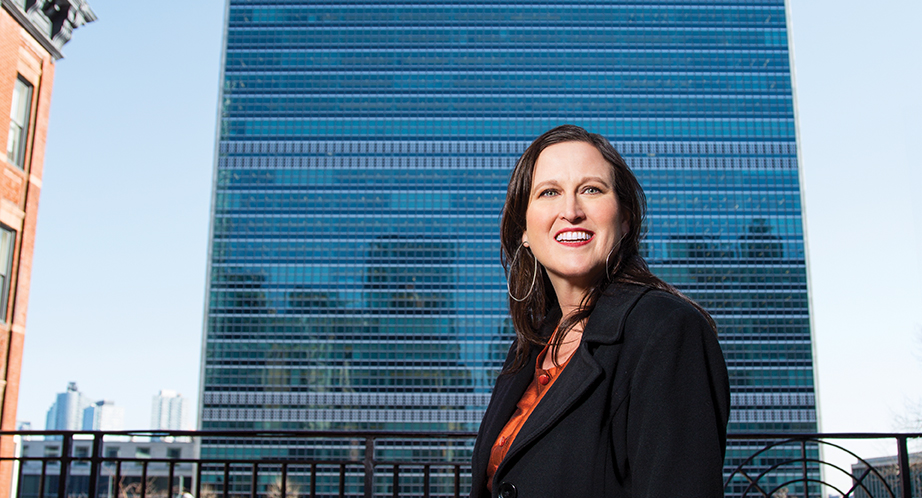 Published May 6, 2018
Professor Susan Nolan consults on decision-making around the world.

Susan Nolan always longed to travel, but never indulged her wanderlust until she earned her bachelor’s degree and bought a one-way ticket to France, where she spent nearly a year teaching English. “Ever since I lived in Paris,” she says, “I’ve loved traveling abroad, living abroad, meeting new people, learning how things work in different places.”

Nolan has only bolstered her international credentials since arriving at Seton Hall as a psychology professor in 1999. She’s spent two yearlong sabbaticals working with non-governmental organizations and universities in Bosnia and Herzegovina, five years as an NGO representative to the United Nations, and a year advising a global human-rights group. She also created Seton Hall’s first course in International Psychology.

Meanwhile, Nolan has published scores of articles and chapters as well as co-authored two textbooks. In 2014 she received the Albert B. Hakim Faculty Service Medal for her work in helping to shepherd Seton Hall through a reaccreditation process.

“She is somebody who bridges the idea of conducting research and bringing it into the classroom,” says psychology professor Andrew Simon, with whom Nolan has collaborated. “This is really a valuable contribution that Susan makes.”

During her first sabbatical in 2005-06, in Bosnia, Nolan consulted with NGOs conducting research projects, training their members in public opinion research and data analysis. Among them were groups focused on women’s rights and election-related issues and an activist youth group interested in local politics. Nolan connected with the groups through the Organization for Security and Co-operation in Europe.

She also worked with a dozen determined high- school students who countered several overdose deaths among their classmates by conducting a survey on substance-abuse problems in their community.

With Nolan’s help, the group randomly selected 50 students from each school to take part in the survey, analyzed the data, and then disseminated it, also talking about their work on local radio. “They were taken seriously,” Nolan says. “They were able to shed light on a problem they were concerned about in their school.”

At the United Nations, working with the American Psychological Association, Nolan brought psychology research to NGOs, U.N. staff members and mission employees from across the globe, and served on committees on mental health and sustainable development. Though the latter role was not her specialty, Nolan gave herself a crash course on sustainability, and before her term was done she helped coordinate a panel discussion titled “Consumption and the Rights of Mother Earth.”

“The misconception about psychology was that it’s all about clinical psychology, but there’s so much research outside of that,” Nolan says. “There’s the whole field of environmental psychology that looks at human decision-making and how we can change decisions and behaviors related to the environment.”

Nolan returned to Bosnia for her second sabbatical in 2015-16 as a Fulbright scholar. Working from the University of Banja Luka, she studied the Bologna Process, which seeks to impose a system of college-level standards across Europe, and its impact on teaching psychology in higher education.

During a term with the American Association for the Advancement of Science, Nolan was an on-call scientist for the International Center for Not-for-Profit Law. She helped the center develop surveys of civil society groups in Jordan, Kuwait, Lebanon, Morocco and Tunisia.

Nolan’s international experience has shaped her approach to teaching and her research back at Seton Hall. Her work on the Bologna Process has led to a book proposal on assessment in higher education, now under review by a publisher.

“I’m now much more aware of the research that psychologists miss,” Nolan says, “if we are not explicit in seeking out work by international colleagues and on international topics.”