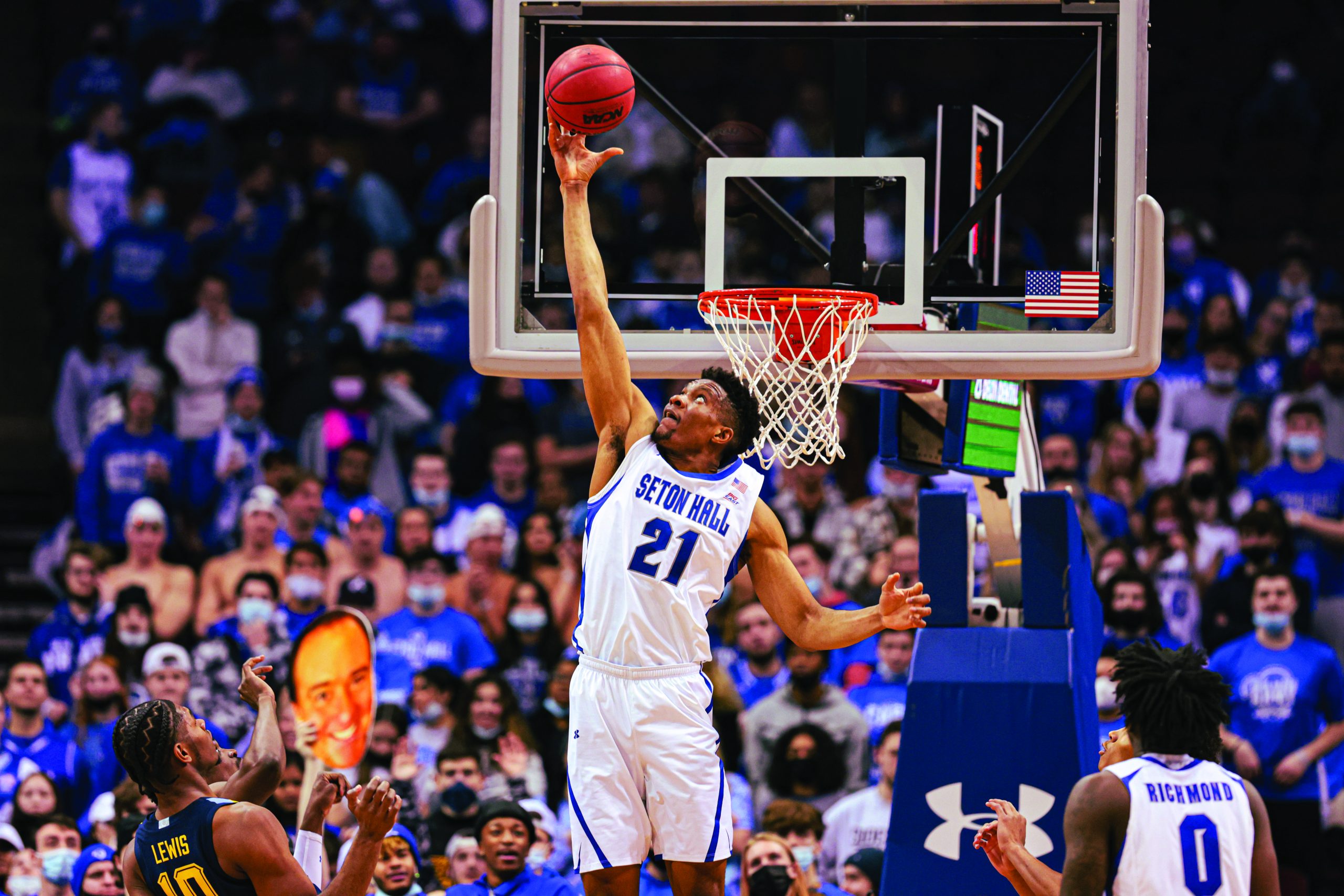 Published April 25, 2022
Ike Obiagu ’21 is successful both on the basketball and in the classroom while being a calm presence for his teammates.

Ike Obiagu ’21 has been away from his home country of Nigeria for the better part of a decade. During that time, he has developed into an intimidating 7-foot-2, 265-pound presence on the basketball court, first in high school, then at Florida State and finally at Seton Hall after he transferred in 2018.

Those closest to Obiagu back in Nigeria are well aware of his accomplishments thousands of miles away.

“I send them clips of the games, and they always keep up with everything,” Obiagu says. When his family watches those highlights, they can see what has become obvious to college basketball fans everywhere: There’s no better center on the defensive side of the game.

After arriving at Seton Hall, Obiagu quickly climbed the list of Pirate leaders in blocking shots. During the 2021 season, he led the BIG EAST by averaging 2.7 blocks in 19 conference games. His season included an eight-block effort against Wagner College, which he topped by swatting nine more against Georgetown, which tied for the most in a single game for a Division I player last year.

And the 2022 campaign was simply more of the same. He started the season with five blocks against Fairleigh Dickinson. In early January, Obiagu recorded six blocks in a thrilling overtime victory over the University of Connecticut. But he was only getting started. A game after notching five blocks versus DePaul, he collected seven more against Marquette. St. John’s then suffered at the rim as Obiagu again blocked seven shots in a triumphant showdown at Madison Square Garden.

All of that led to the moment when Obiagu topped the Seton Hall record for career blocks on January 26. He picked up four blocks in a rematch against Marquette, giving him 169 (and counting) for his Seton Hall career, breaking the record previously held by Samuel Dalembert, who had 167 blocks for the Pirates in his standout career that ended in 2001.

“I’ve always been pretty good at it,” Obiagu says of his blocking ability, though he might be even better at understating that skill. “It came naturally to me. You have to get the timing correct or you get a foul. Over the years I’ve learned how to block a shot without fouling the player, and I know when to go for a block or when not to go for a block.”

Obiagu came to Seton Hall thanks to the efforts of former Pirates assistant Tony Skinn, a Nigerian-born coach who helped the University land the talented center. Another Seton Hall assistant, current associate head coach Grant Billmeier ’07, a former Pirates big man himself, has since played a key role in Obiagu’s development.

“He’s an elite rim protector, and we’re fortunate to have him,” Billmeier says. “He covers up for a lot of guys on the defensive end. He allows us to be a lot more aggressive. Guys know they can pressure the basketball more, knowing that he’s back there to try and block shots.”

While it’s impossible to miss Obiagu’s impact on the court, he also has earned academic accolades. In 2021, Obiagu, who received his degree in business administration with a concentration in accounting and now studies for his master’s in accounting, was named the BIG EAST Basketball Scholar-Athlete of the Year, an honor Obiagu notes “is easy to brag about,” though the soft-spoken center is unlikely to do much of that.

A professional basketball career remains his goal, but he also is excited about the possibilities offered by his degree. “Everything is open for me,” he says.

“Ike’s one of the greatest people I’ve ever been around,” Billmeier says. “I’m very fortunate to have been around him, and I’m very fortunate to have my family around him. My daughter, who is 3 going on 4, she asks about Ike constantly. Even when she’s rambling on the phone with him, he’s still as interested in the conversation as she is. He’s just got a great personality.”

It goes well with the great résumé — on the court and in the classroom.