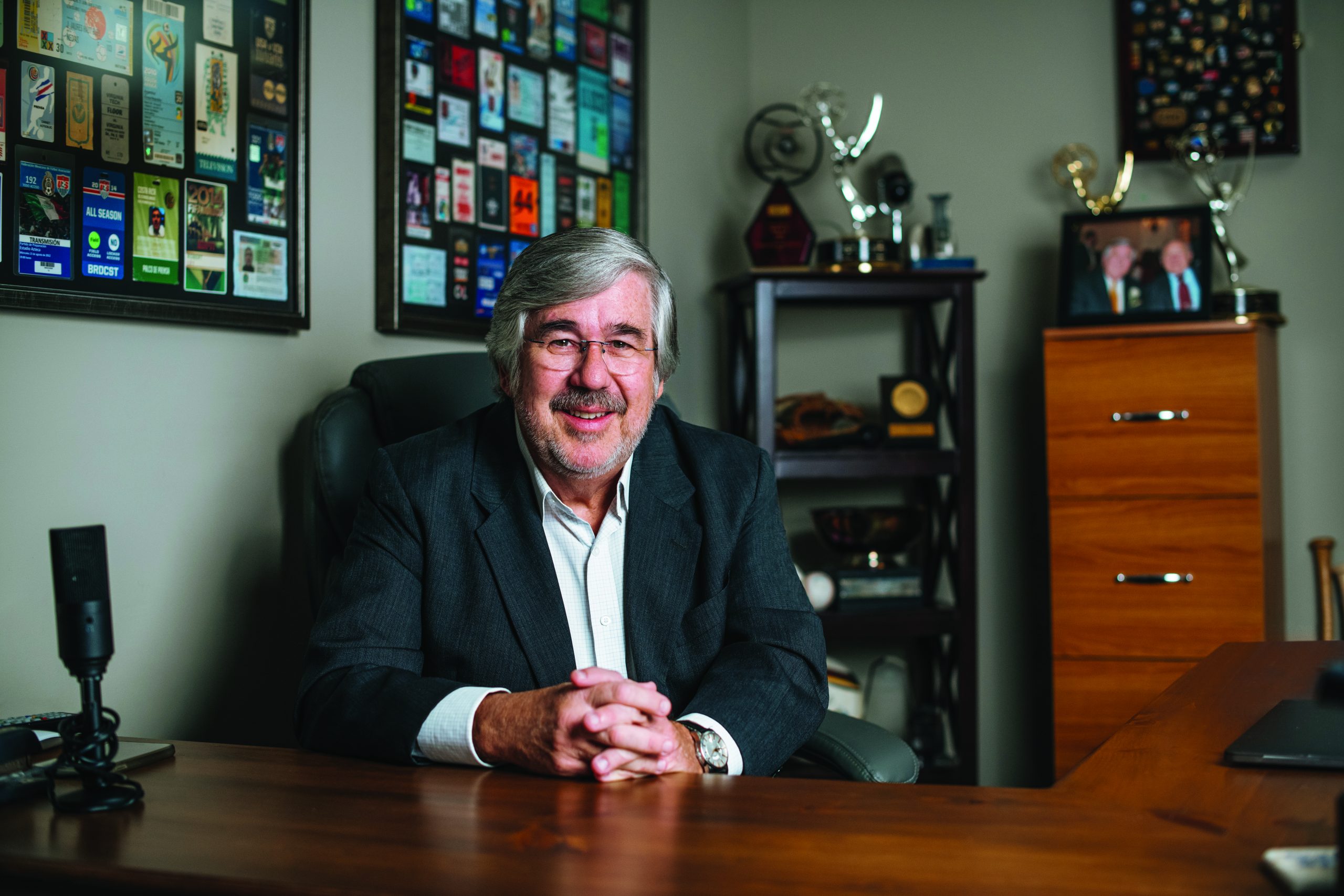 Published April 25, 2022
Since retiring from ESPN, sportscaster Bob Ley ’76 has lent his considerable talents to helping shape the future of sports media education at Seton Hall.

When he retired in 2019, Ley was ESPN’s longest-tenured anchor, with his first broadcast airing on September 9, 1979. His career is a cavalcade of accomplishments: In 1980, he hosted the first NCAA Selection Show, and in 1995 he narrated the first This is SportsCenter ad. He’s interviewed four United States presidents, won 11 Sports Emmys, and won two Peabody Awards for his work on ESPN’s Outside the Lines, a show he helmed for almost 30 years.

That all began at WSOU-FM, Seton Hall’s radio station, when Ley started broadcasting play-by-plays of Pirates basketball in 1972.

“WSOU became the place where you would go in the morning. You’d go to classes, go back to the radio station, go to class, go back to the radio station,” says Ley, who grew up in Bloomfield, New Jersey (three blocks from Holsten’s, he noted, which was used for the final scenes of The Sopranos) and commuted to school. “You’d spend more time at WSOU than you would in all your classes put together.”

He stayed close to Seton Hall, too, even as he became one of the biggest names in sports media. Ley served on the Board of Regents, gave the 2019 commencement speech, and in early 2020, came back to call a Pirates basketball game.

In 2021, Ley made a lead donation to fund the Center for Sports Media at Seton Hall, offering an interdisciplinary approach to learning that mixes academic training with practical experience in the industry, through partnerships with major media outlets.

The center will offer a “cross-disciplinary, outward look at sports media that distinguishes [Seton Hall] and enriches the student experience,” he says. “It will give students the ability to practice the practical elements of the profession and get real experience — be it reporting, storytelling, mastering the technical side or understanding the history of the issues at play.”

“Bob is one of the kindest and most ethical people I’ve ever met. He’s authentic,” says Renee Robinson, interim dean of the College of Communication and the Arts. “He takes the time to talk to our students, and to listen. He’s invested in the University, not just with his gift — which is affording wonderful opportunities to our students — but also with his time, his energy and his enthusiasm dedicated to what we can accomplish.”

Ley’s broadcast journalism career started to take off even before he graduated. While still a student and working at WSOU, he also worked at 710 WOR in New York City. That landed him a spot at Suburban Cablevision East Orange, which was just launching, a few months after graduation.

This was in the early days of cable television, when sports fans were used to being able to watch only the sports that ABC, NBC or CBS decided to broadcast that week — and what they showed was typically games of big-city teams. While local newspapers covered North Jersey sports games, television did not — until the debut of local cable systems.

At Suburban Cablevision East Orange, “we were doing local sports in North Jersey to an audience of my neighbors and friends, who had never before seen games of their teams on TV before,” he says. “I took what I learned at Seton Hall and put it into practice as a young professional, announcing 200 events a year. It was the best boot camp you could have ever had.”

Ley turned down a job at New Jersey Public Television and took a chance on ESPN. He had immaculate timing. “I was trying to carve out job experience and didn’t realize at the time that I was at the beginning of a revolution in sports media,” he says.

The sports media world is still changing, and Ley recognizes that a dedicated Center for Sports Media will help prepare Seton Hall students to navigate it, while giving them the same kind of real-world experience that launched his career.

“Sports is such an essential part of culture, and is the manifestation of culture in ways that you
need to understand if you want to understand what’s happening in the world, now more than ever,” he says. “The stories of athletes — the conflicts, the celebrations, all of it — we need our future sports journalists to be prepared to cover this very important part of our world.”