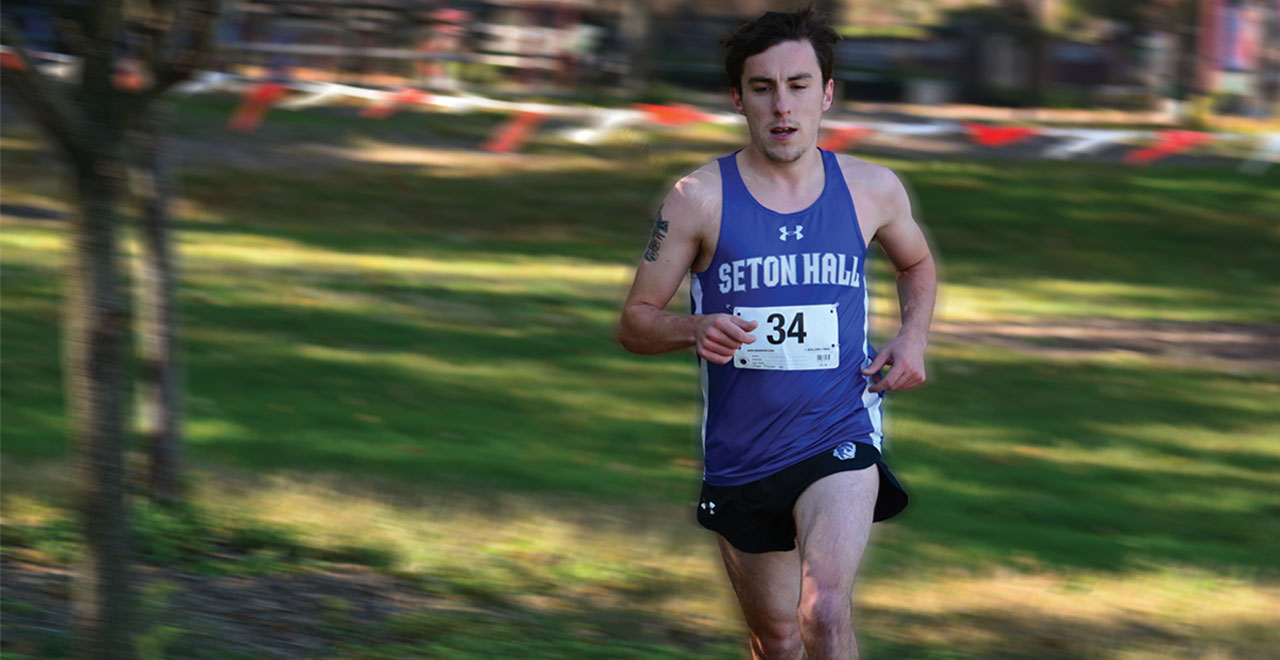 Cross-country running is a far more mentally challenging sport than a physically grueling one, says senior Ryan Flannery, three-time captain of Seton Hall’s cross-country team and a top-five finisher in a raft of races he ran during his sophomore and junior seasons. He sees it as a test of character:

“You think your body can’t do it, but it can. You have to keep telling yourself, ‘keep going’ as your body is breaking down. ‘Keep going, keep going.’ It’s like life.”

Running through every kind of challenge might be a metaphor for Flannery’s life so far. The son of a widowed mother, Michele, who works long hours at Wal-Mart, and brother to Sean, a cheerful young man with autism, Flannery understands the payoff of persistence. Indeed, he flirted with the idea of quitting the team from exhaustion his freshman year before going on to multiple triumphs.

The story is that Ryan arrived for training the August before his freshman year, out of shape by university-level competitive standards and not too sure of his talents. He considered himself a competent runner at Lacey Township High School in southern New Jersey, “but I wasn’t like No. 1 in the state; I was not even No. 1 on my team.”

But he’d been recruited by Seton Hall’s renowned track and cross-country coach John Moon, who saw something in him. “I remember him being very adamant about believing in me,” Flannery recalls of his first conversation with Coach Moon, a former Olympian and one the fastest humans on earth in the early 1960s.

From 43 years of coaching experience, Moon says, “You can’t tell from stats, you can’t just look at a film and tell if a boy’s dedicated.” That takes a face-to-face conversation. And from the chat they had, Moon knew that the record of “a just-average runner” did “not reflect what he would become.” He explains: “This guy, I mean, he was just motivated to excel.”

Moon pushed, encouraged, trained and inspired Flannery, who hardened through a punishing 70- and 80-mile-a-week training regimen to finish his freshman year as a top competitor, not a dropout. Along the way, Moon became a mentor and father-figure for Flannery, whose own father had died of complications from alcoholism.

“We developed a real bond,” Moon relates, “through talking over difficulties and personal issues. … Once he graduates, I feel like I’m going to be losing a son.”

The process also created an instinct for leadership, Flannery says, adding that he leads his teammates “through example” — on the track “by screaming encouraging words” and off the track in excellence in classroom work and personal standards.

Flannery calls his motivational method “working through that mental bridge, knowing that you can do it,” and applies it to his budding career as a radio deejay and sports announcer. At the College of Communication and the Arts, his concentration is in radio — an interest he brought from high school, where he called football and basketball games.

Today, his on-air credits include being commentator for Seton Hall women’s basketball and host of the Whatchu Been Missin’ hip-hop show on WSOU. Working into the wee hours and training in the early morning, Flannery also found time to win a third-place prize (for a radio spot he created) in a nationwide contest organized by NextRadio and College Broadcasters Inc., as well as first-place honors for Best Sports Audio Play-by-Play at College Broadcasters’ national convention in October.

For the time being, though, the “pinnacle” of his college career was being named captain of the 15-man cross-country team, he says. Coach Moon (who tutored 19 Olympic athletes so far during his career) would agree: “I just wish I could clone him and have him as team captain here for the next 40 years.”