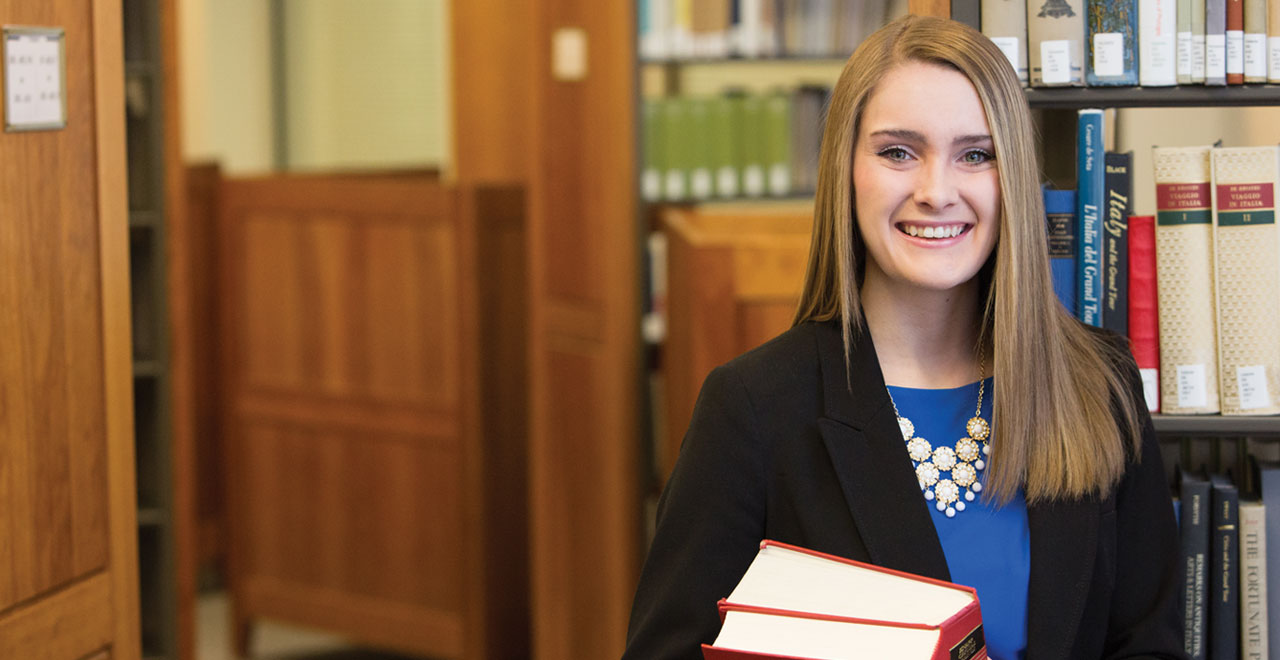 On a lovely mid-spring morning in April 2015, the nine justices of the U.S. Supreme Court heard arguments in one of the many highly charged cases on the docket for the term. Outside, there were soft, white clouds scattered across blue skies, and a light breeze rustled leaves in the trees. As often happens, supporters and opponents of the issue at hand filled the broad space below the courthouse steps to make their opinions known.

For Elizabeth Donald, a junior at Seton Hall University and intern at the Supreme Court, it was a day of heightened excitement and anticipation. The court building was a beehive of activity, and from her station checking in members of the bar, she observed the tumult “as clerks strode down the halls to prepare for the case and a countless number of attorneys lined up for a chance to enter the courtroom.”

“It was very surreal, to say the least,” Donald says. That, in fact, sums up her time at the court as a participant in the School of Diplomacy Semester in Washington, D.C., Program. “Having a dream of being a lawyer and getting to work at the highest court of the land is just surreal; that is the best word I have to explain it,” she says.

The time she spent in Washington was made all the more thrilling by the fact that the court heard several significant cases while she was there, including ones addressing lethal injection, the Affordable Care Act, freedom of speech and housing discrimination. That level of on-the-spot exposure “made me fall even more in love with the study of law,” she says.

After she graduates in May with a bachelor’s degree in modern languages — she is fluent in Spanish (in which she conversed with Justice Sonia Sotomayor) and French, knows advanced Latin (handy in a legal setting) and is conversational in Portuguese and Italian — Donald plans to pursue her passion in law school. In fact, she has already been accepted into several top law schools.

At the age of 21, she has begun to lay the foundation for her future career. “I expect that it is going to be very distinguished,” says Wesley W. Horton, senior partner in the Hartford, Conn., appellate firm of Horton, Shields & Knox, where Donald spent this past summer gaining more first-hand exposure to the practice of law.

Donald is the first undergraduate that Horton’s firm ever hired. After reviewing her résumé and noting that she had been an intern at the Supreme Court, “we thought she would be interested in seeing what a law firm does,” Horton says. “We would pay her a small sum and she would answer the phones and do small things like that around the office.” It didn’t take long — “only a few days,” Horton says — before he and others realized that Donald “had an incredible knowledge of the law for someone who had not yet gone to law school.” Soon they had her doing work on a par with second-year law students. “She really surprised us,” Horton says.

That should, in fact, be no surprise at all, says Robert M. Pallitto, associate professor of political science and public affairs at Seton Hall and Donald’s pre-law adviser. She is a student “who shows exceptional intellectual maturity,” he says. He recounts the time when he met with Donald in his office and she noticed a poster on his door promoting his new book, which was about the Magna Carta and constitutional law. “We began to discuss constitutional interpretation, and

I was amazed by everything she had already read,” Pallitto says. “She knew not only major cases and Supreme Court justices, but also the latest legal scholarship by people like Akhil Amar (a constitutional scholar at Yale, where Donald has set her sights for law school).”

That desire to delve deeply into the intricacies of jurisprudence was further evident in the introductory course Donald took with John Shannon, associate professor of legal studies. “She decided she would extend her study beyond the scope of the required subject matter to include a significant dive into the Uniform Commercial Code,” a byzantine tome of some 2,700 pages that governs commercial transactions in the U.S., Shannon recalls. “She exhibits unusual intellectual curiosity.”

There is much to look forward to in Donald’s future — her law-school education, private practice focusing on the First Amendment, perhaps even a position on the bench, and “the sky’s the limit,” says Pallitto.

But as she looks toward her bright future, Donald reflects back on the semester she spent at the nation’s highest court. “I have yet to experience an opportunity that compares to that of interning at the Supreme Court,” she says. “Not only did I gain a better understanding of the elegance of our system of constitutional law, but I witnessed historic moments that have changed our nation. To live in a nation that not only permits but thrives on freedom of speech and fights to improve itself every day should not be taken lightly.”

David Greenwald is a writer based in Los Angeles.