When Seton Hall put out a call for stories of married couples who met at the University, we got a great response. It’s no secret that many students find love on our campus. One look at the marriage and babies list in the alumni “News & Notes” section of Seton Hall magazine can tell you that.

Here share your stories and take a deeper look at how several Pirate pairs got their start. 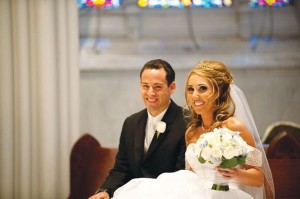 Christina (Charalampous) ’04/J.D. ’08 and Andrew Riso, J.D. ’07
“Andrew and I met as proud volunteers for Seton Hall Law’s new-student orientation in August 2006. Dean Hobbs states every year during his welcome speech to new law students: ‘Look to your left. Look to your right. You may be sitting next to your future boss or even your future spouse.’ Despite the fact that Andrew and I were not new law students, Dean Hobbs was correct.” 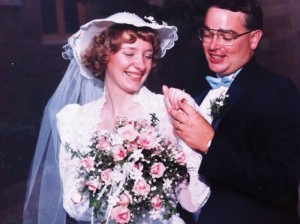 Elizabeth (Johnson) ’84 and Tom Long ’83
“Tom was manager of the baseball team, and I was working in the Athletic Department as a student worker and men’s basketball team statistician when we first met. We started dating when I was a sophomore and he was a junior. I continued to do stats for the team for a few years after I graduated. Tom proposed to me after a basketball game on December 19, 1985. He had planned to pop the question during half time, but was too nervous! We were married in the Chapel of the Immaculate Conception on June 28, 1987. We have four amazing children, Brian, Peter, Victoria and Denis. We sang the fight song to each of them from the day they were born. They are proud followers of Pirate sports and grew up knowing that Seton Hall is where Mom and Dad’s story began.” 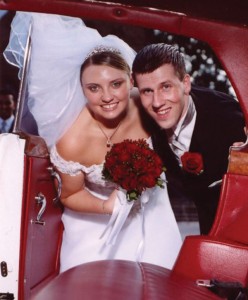 Agnes (Kolakowska) ’02 and Conall Duffin ’98
“As a high school senior, I had planned to go to college with my best friend, but our hopes were dashed when we didn’t get into the same schools. I decided to stay close to home, attend Seton Hall and transfer after one semester. After just a few weeks into my freshman year, I knew that landing at Seton Hall was the best thing that could ever happen to me. I not only fell in love with the school, I met my soul mate. Conall’s senior year was coming to a close and he wasn’t sure he was ready to leave college, so he decided to take on another major and stay an extra semester. I was a freshman when my roommate dragged me to a fraternity party where we met and connected instantly. Conall graduated in fall 1998, and we continued to date. Just before I graduated, he proposed to me in Central Park. We were married in the Chapel by Father Bob Meyer on September 19, 2003. Only a few years after we got married, I was diagnosed with a rare neurological disorder and underwent three brain surgeries. I never imagined that the vows we took that day — “in sickness and in health” — would resonate so soon. Although our lives haven’t been easy in the last 10 years, I couldn’t imagine a better life partner by my side. Destiny brought us together. Now we are living our happily ever after and expecting a baby boy.” 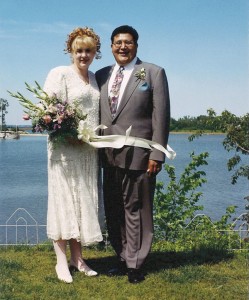 Heather (Gaw) ’91 and Robert McGee ’91
“I was working as a desk assistant in Neumann Hall when I first saw my future husband. I didn’t know him at the time, and as he passed the desk, I stood up to get a better look at him. He turned around and caught me looking at him. We went to New York City on our first date in February 1989 and have been together ever since. We have two beautiful children, Lukas and Sophie.” 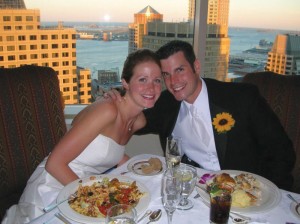 Jillian (Dunn), M.A. ’06 and Matthew Maisano ’02/M.A. ’06
“Matt attended Seton Hall for both his undergraduate and graduate degrees and has had season tickets for Seton Hall’s men’s basketball team since 1993. In his words, ‘It was only right that I would meet my wife at Seton Hall.’ We had our first class together in fall 2005. On the first day, Matt walked in late and the only open seat in the room was next to me. Monsignor Mahon said, ‘Open your books,’ and Matt had to share mine since he didn’t have his. The following morning, I was working in the undergraduate admissions office as a graduate assistant when I heard a knock on the door. Matt walked into the office, asking for help registering for evening classes. Technically, I wasn’t supposed to register graduate students, but I worked my magic and got him enrolled in classes for the same program I was in. A friendship bloomed and then a relationship, leading to a marriage in 2007. We are now the proud parents of a daughter, Anna Sophia, and are excited to welcome our second child, a boy, in mid-December.” 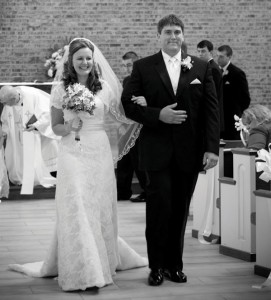 Emily (Johnson) ’07 and William Fluck
“Even though we lived in same dorm freshman year, I didn’t meet Will until November, right before Thanksgiving break. I was writing a paper in the Aquinas lounge, where he happened to be tutoring my friend in math. I invited him to join a large group of friends for dinner in the cafe a few nights later and the two of us stayed long after the rest of our group left. My friends always joked that jocks and sorority girls don’t mix — I was in Alpha Sigma Tau and he was a discus and shot put thrower for track, but we hit it off and never looked back. We have been married for four years now. 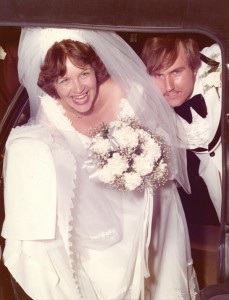 Maureen (Conroy) ’75 and Peter Tauriello ’76
“I met the love of my life and best friend in WSOU’s studios. I was an engineer and he was an aspiring DJ. We became friends first and then started working together as show host and producer/engineer. We shared our first kiss on the steps of the radio station in 1973 and have been inseparable ever since. We were married in the Chapel on July 24, 1976, and are still together — three children and three grandchildren later.” 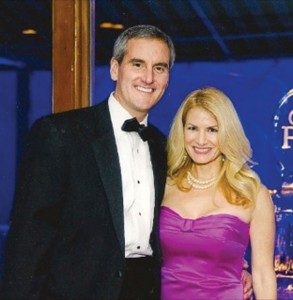 Maria (Carini) ’86 and Bradley Broussard ’87
“We were both having lunch in the old cafeteria in Boland Hall. At the time, it was popular for both girls and boys to wear OP shorts and Ralph Lauren polo shirts. That day, we happened to be wearing the same outfit! Brad walked up to me and said ‘We have to stop dressing this way.’ I immediately knew I had just met the most special person in the world. We were married in the Chapel by Father John Mannion, and celebrated 26 years of marriage in July.” 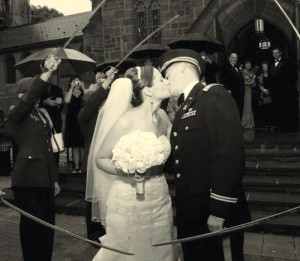 Tara (DiDomizio) ’06/M.A. ’07 and Daniel Curtin ’05
“I decided to join ROTC in the second semester of my freshman year, in spring 2003. Dan was a sophomore at the time and was also in ROTC. We became friends though various ROTC activities and began dating in April 2003. Dan would make the trek from Xavier to Boland Hall and we would hang out in the Pirates’ Cellar. He joined me in DOVE’s Adopt a Grandparent program and on walks to Bunny’s — and even to Cold Stone Creamery in the middle of a blizzard. But our favorite Seton Hall tradition was going to the late Mass in the Chapel on Sundays. We would later get married in that Chapel in 2009. Dan is a captain in the Army, and I am his proud Army wife!” 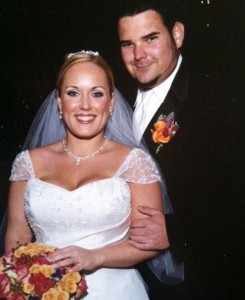 Sarah (Wilhelm) ’01 and Matt Chrystal ’00
“The first time I ever saw my husband’s face was on the cover of The Setonian back in 1998. An article had been written about him because he claimed he had been struck by lightning. In the picture, he sure looked like he had. His hair looked crazy, sticking out in every direction. (Little did I know, he wore it that way all the time on purpose.) I thought to myself, “Poor guy; he looks like a nut!” The next time I saw Matt, he was on stage competing in the Pirate King pageant, wearing nothing but a superhero cape and boxer shorts. He was named runner-up and to this day, he claims he was robbed of first prize. I still thought he was crazy. Then a mutual friend decided to play matchmaker with us. Eventually Matt asked me out to dinner with him for Valentine’s Day, and I said… ‘yes.’ I have been smitten with him ever since. Thanks to Seton Hall, I’ve been with my best friend and soul mate since 1999. We have been married since 2005, and I am looking forward to many, many more glorious years together!”

Seton Hall is a beautiful place to get married. Here’s proof!