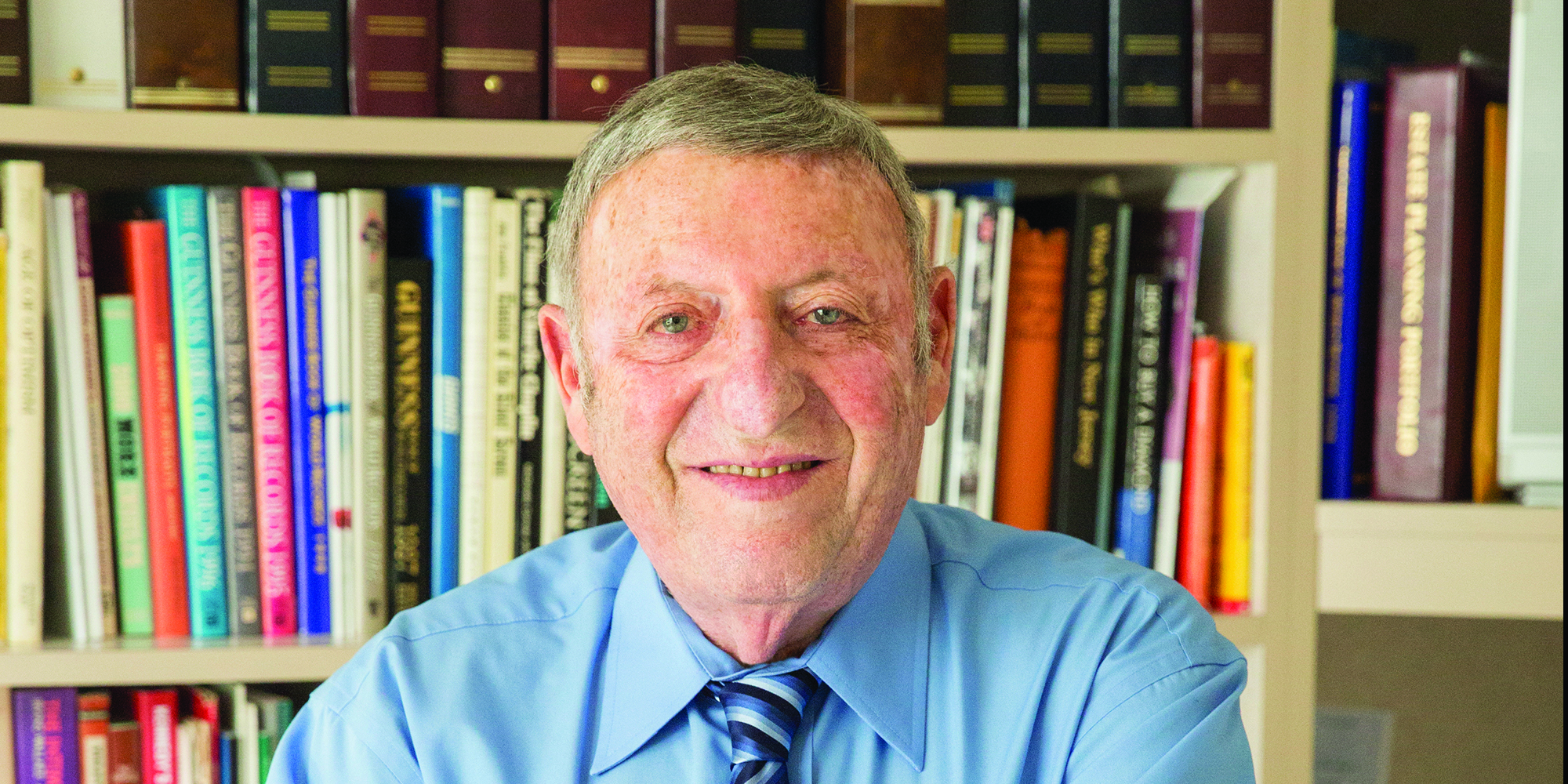 Named an Inventor of the Year in 2015 by the New Jersey Inventors Hall of Fame, Walter Alina ’56 transformed entire manufacturing processes with his visionary concepts

The silicon wafers used to manufacture electronics in the early 1960s were the size of cookies, and to turn the wafers into semiconductors, ranks of women sat at benches in RCA’s Somerville, N.J., plant, peering through microscopes and tweezing small indium dots onto them like sprinkles. It was slow and laborious work, straining the women’s eyes and tendons. The process strained RCA’s profit margins, too, in a competitive electronics industry. Walter Alina ’56 thought there must be a better way.

Alina was just a few years out of Seton Hall and a rising star at RCA who had already appeared on the cover of a trade journal, Product Finishing. An idea of his — to tin-plate transistor shells rather than coat them with solder — had won a national competition the magazine sponsored, and had cut costs for RCA by 80 percent. He had made himself into an expert on electroplating — using chemical baths and electric current to, as he says, “take a cheap piece of metal and put a coating on it that will do the job of a very, very expensive piece of metal.”

One afternoon, he had an idea about how to get those dots onto those wafers without a battalion of squinting, tweezer-wielding women. “So I’m saying to myself, it just came to me one day, there’s no reason you can’t electroplate this,” he says. “So I did some experiments to show it was feasible.”

It was indeed feasible, and over the next several years he refined the process he had envisioned, which was patented in 1965. “RCA said this is so valuable to us we’re going to file this in 16 countries. The old record was 11,” he says, paging through a folder of patent documents in multiple languages in his home in the Lakewood, N.J., retirement community that he shares with Lucille, his wife of 62 years. “The patent belongs to RCA but they had to take me out to lunch and they gave me $150.”

The process allowed RCA to make semiconductors more quickly and cheaply, and to keep abreast of its Japanese competitors. “This is the most important thing I have ever done in my life; that little brainstorm from one afternoon saved [the company] millions,” Alina says.

And it was the achievement cited most prominently among his many others when he received an Inventor of the Year Award from the New Jersey Inventors Hall of Fame last October. “Mr. Walter Alina was responsible in a major capacity in developing and implementing ideas well ahead of his time,” wrote the late Evan P. Zlock, engineering manager at RCA, in the letter nominating Alina. “His contributions were beyond the normal scope of manufacturing patents and improvements and resulted in millions of dollars of savings, higher quality, shorter delivery cycles. All of this at a time when competition was hottest and heaviest.”

In his acceptance speech at the black-tie banquet in Hoboken, Alina invoked his father, a dentist. “I remember when I was a little boy, my father once told me that he had been fortunate to have lived through a time period that had the greatest scientific transformation the world had ever seen,” he says. “I often thought about how fortunate I was to be able to participate and contribute to help shape some future transformations throughout my lifetime.”

But if not for his father, Walter Alina might never have shaped anything.

Alina was born in Vienna in 1931 and grew up there in a decade when Jewish families like his felt increasingly threatened by the rise of the Nazi faction in nearby Germany. “My father saw the handwriting on the wall,” he says. “He couldn’t convince any of our family to get out. They thought it was going to blow over. Of course they all perished, the whole lot.”

In early 1938, just before Germany seized Austria, Alina’s father managed to get three visas for Finland. Walter, an only child, and his mother left first, followed a month later by his father. The first year was peaceful, Walter learning Finnish, and his father, who couldn’t work as a dentist there, carting garbage in a hospital. But then the Soviet Union invaded, and bombs started falling. Sponsored by an aunt and uncle who had long lived in New York, they sailed for America in March 1940 on the SS Bergensfjord.

They settled in the Weequahic section of Newark, where his father worked first as a dental technician and then opened his own dental lab. Alina was placed in the second grade, where the teacher soon realized he didn’t belong and took him to see the principal, who gave him an impromptu math test. “Fortunately I was very good at math,” he says. “After I finished answering all the questions, the next thing I knew I was moved into the fourth grade.”

He was good at piano, too. “My mother wanted me to be a concert pianist, you know how mothers are, and I said to her, ‘I can think of better ways of starving to death,’” he says. He chose Seton Hall for college and he majored in chemistry and minored in business, aiming for a career somewhere in the sciences. He wasn’t quite sure where, except that it wouldn’t be in his father’s business. “I told my father I needed something creative, that I’d like to build something, to do something with my own mind,” he says.

He surprised his mother one Wednesday when he was a freshman, tuning the radio in their living room to WSOU-FM before taking the bus to campus. “I told her, ‘At 3 o’clock just turn it on and listen,” he says. He had earlier walked into the campus station and asked if there was a piano show he could play on. An impromptu audition — like that impromptu math test for the school principal — earned him his own half-hour slot, on Wednesday afternoons. “And so from then on my mother had a lineup of chairs and dishes of candy and peanuts and had her friends over to listen. She got off my back and she realized that I was going through with my science career.”

After two years as a full-time student, he switched to part-time, taking night classes at the downtown Newark campus and working days — selling wind-up toys to shops across New Jersey at first, and then as a lab manager at a chemical lab in Newark. “That’s where I fell in love with electroplating,” he says. “It became my specialty, sort of by accident.”

He had fallen in love, too, with the daughter of the owner of the Catskills hotel where he worked as a waiter the summer after his freshman year. He and Lucille were married in 1955 and have two children and three grandchildren. After he started working at RCA in 1958, Alina went back to night school, taking classes in metallurgy at Newark College of Engineering.

He left RCA in 1973 for a plating company in Newark, and then spent the last 21 years of his career, until he retired in 2001, at General Magnaplate in Linden, which is best known for developing and making the metal coatings used on thousands of NASA’s space vehicle parts. He managed to get the company into the 1995 edition of Guinness World Records after noticing an error in an earlier edition of the record book, which listed Teflon as the “most slippery solid lubricant,” with a coefficient of friction of 0.04. Alina knew that Magnaplate’s Hi-T-Lube was lower, at 0.03, and the record was corrected, with much attendant publicity for him and the company.

“It was very big deal around here,” says Candida Aversenti, CEO of General Magnaplate, who keeps in her office a plaque with a laminated newspaper story about the Guinness record. Attached to the back is a handwritten note to Alina from her late father, Charles Covino, who started the company in 1952. (“Without your inspiration and perseverance this record would never have been recognized by Guinness. You are the greatest in my book,” it reads.)

Alina keeps a copy of that Guinness book, as well as many of his old college texts. “I love reading them, especially a lot of the metallurgy stuff. That doesn’t change,” he says. “It’s what they do with it that changes.”