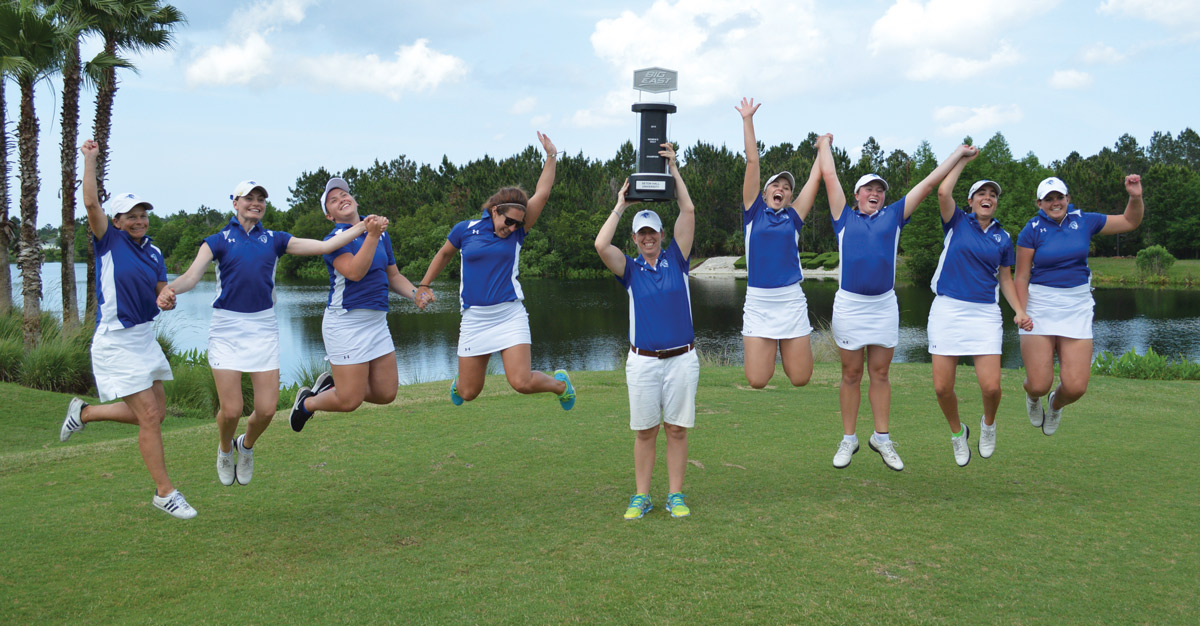 Erin McClure’s performance in the final round of the 2015 BIG EAST Conference Championship lifted the Seton Hall women’s golf team to a one-stroke victory in the championship and helped the Pirates win the title for a second year in a row.

The senior had played 36 holes without a single birdie before recording five in the third round. Her big finish — with a 2-under-par final round — put her at 8 over par for the tournament.

“I’m proud to see how Erin has grown from her freshman year until now,” said head coach Sara Doell. “For her to shoot 2-under in the BIG EAST Championship final round speaks to how much she’s matured as a golfer. She was unflappable and picked up her teammates when they needed it most.” 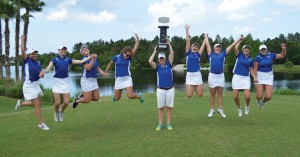 Early on, Seton Hall looked like it was going to cruise easily to its second straight title, but the team had to hold off a furious charge by Georgetown in the final holes. With the final three golfers approaching the 18th hole, Seton Hall had a one-stroke lead. Megan Tenhundfeld chipped her third shot to within three feet of the hole and made the putt to preserve a slim margin of victory.

For the tournament, Seton Hall shot a 50-over-par 311-299-304 – 914. Georgetown was 51 over par and Xavier finished at 57 over par. All three teams had been separated by just one stroke following both rounds one and two.

Tenhundfeld had a sparkling second round, which kept Seton Hall tied for the team lead through 36 holes. For the tournament, Tenhundfeld tied for seventh place overall with a 14-over-par 78-70-82 – 230.

Senior Ali Kruse was toward the top of the individual leader board all tournament long. In the final round, she was 2 under par through the front nine, fueled by an eagle on the par-4 ninth hole. For the tournament, Kruse tied for fourth with a 12-over-par 76-74-78 – 228.

“Ali’s leadership both on and off the golf course is second to none. It’s great to see her a part of this,” Doell said. “She’s been a game-changer for us since the day she stepped on campus and her influence and performance was instrumental in leading us to another title.”

Cassie Pantelas improved each day during her first BIG EAST Championship. The freshman started her final round with 10 straight pars. For the tournament, Pantelas finished 11th with a 17-over-par 81-78-74 ­– 233.

Karlie Zabrosky rounded out the Pirates, scoring with an 11-over-par 83 in the final round. For the tournament, she was 29 over par with an 80-82-83 – 245. She had a large role in the Pirates strong performances early in rounds.

“From day one, this program has continued to progress and reach new heights,” Doell said. “Last year’s BIG EAST title was a dream realized. But this year, entering the tournament as the favorite for the first time and still rising to the occasion for another title, may be even more impressive. Words cannot express how proud I am of this team.”