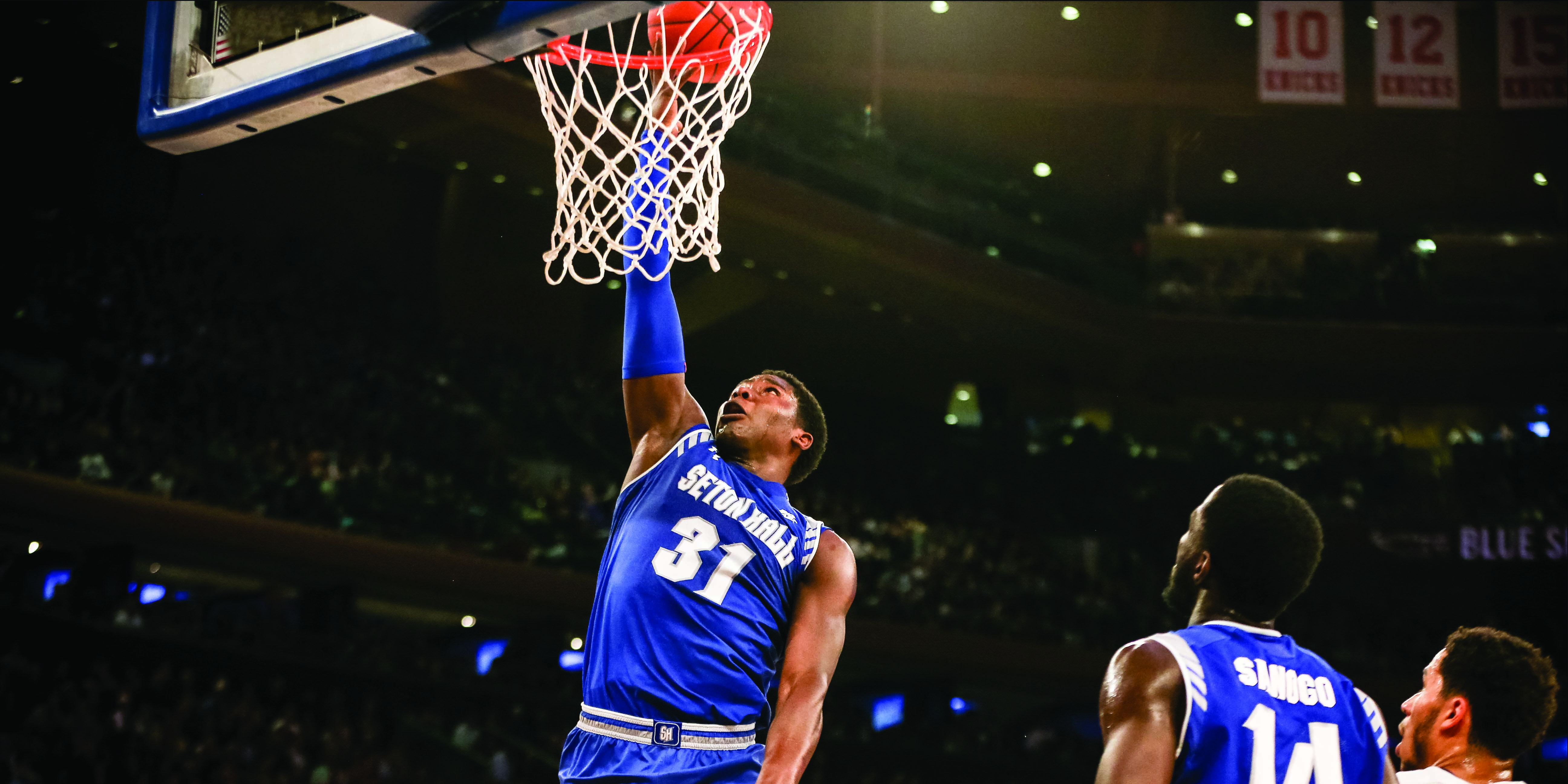 When Angel Delgado arrived in the United States from the Dominican Republic in 2012, he sought opportunity for a better life. He knew he was talented enough to play college basketball, but was not sure where to go.

Coach Kevin Willard of Seton Hall was the first college coach he met while in high school, and as Willard and his staff fostered a relationship with the talented center, the decision became clear. “They have always been there for me,” says Delgado. “They are always helping me do the right thing for the future.”

Delgado has blossomed into one of the best post-men to play in the BIG EAST. He quickly showed Pirate fans he was capable of greatness, becoming one of just two Seton Hall players ever to win a BIG EAST Rookie of the Year award. Now, Delgado has become arguably the nation’s best rebounder, while also posing a potent offensive threat.

In three seasons, Delgado has become the program’s all-time leading BIG EAST-era rebounder (1979-present), and is only the fifth player in program history to reach both 1,000 career points and 1,000 career rebounds.

His progression from good to great can be traced to some hard work last summer. Not content with his role in helping win Seton Hall’s first BIG EAST Tournament championship since 1993, Delgado was motivated to get even better. He worked out in the gym daily, losing body fat and adding 15 pounds of muscle.

“Angel has always been a high-level rebounder,” Willard says. “But the work that he did this past summer on campus and the way he’s developed his body have pushed him into an elite level. He’s really bought into being the best rebounder in the country.”

Delgado’s significance as a Pirate goes beyond basketball — he is also an ambassador for the University. At community events, he engages fans in conversation and is a huge hit with children, who are mesmerized by his 6-10, 240-pound frame.

After games at the Prudential Center, Delgado signs autographs and poses for pictures. In early January, a photo of him embracing a young fan after a victory melted hearts across New Jersey. The social and behavioral sciences major is also a two-time member of the BIG EAST All-Academic team. He has starred in a new University commercial, which highlights the University’s strengths and ends with him making a basket, saying Seton Hall is “really good at basketball, too.”

Delgado seems to have unwavering energy, on and off the floor.

“It’s a God-given gift that nobody can take from me,” Delgado says when asked about the source of his passion. “Wearing ‘Pirates’ on my chest is a privilege. There are so many great guys that came here, and they did everything that they could to bring this school to a high level. One of my goals is to keep it that way.”

But Delgado also plays for his family, and thinks about providing support for them once he’s out of school. His mother, Angela Janet Astacio, is a physician; she moved to Argentina for work when he was 10 to better support Angel, his sister Yaelis and his brother Raidin.

Delgado says his mom dedicates her limited time off from work to visiting him. “She always has gone back and forth,” he says. “My older siblings helped take care of me when I was a kid. It’s time for me to take care of them. I wake up every day and put my feet on the floor to say ‘thank you’ to God. They deserve a lot for what they’ve done for me.”

With every rebound, every victory, every good grade and every hug with a fan, Delgado is making the most of the opportunity he craved when he arrived in America.