The outpatient spinal cord gym at the Kessler Institute of Rehabilitation in West Orange feels nothing like a hospital. Handsome wood beams run across the high ceiling of the enormous space, and sun spills in from many windows. It’s more like a state-of-the-art fitness gym, outfitted not only with athletic equipment — treadmills, stationary bikes, parallel bars, floor mats, and colorful exercise balls — but a staff of experienced physical therapists as well. They all wear polo shirts and khakis, but one stands out from the rest with her cropped, white-blonde hair, icy-blue eyes, tattoos, perma-smile and booming voice.

“Come on, squeeze! Use your belly muscles!” physical therapist Sandra Wojciehowski bellows to a patient one morning in July. 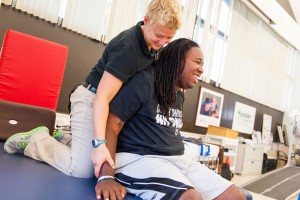 Wojciehowski (who has gone by “Buffy” since age 12, when a friend at Girl Scout camp marveled at her buff canoeing skills) is trying to motivate the patient, a middle-aged man, to sit up on his own for a full 60 seconds. The man started coming to Kessler in 1975, after a bullet paralyzed him from the waist down. “Buddy, you’re weebling and wobbling all over the place,” she says.

Her patients often call her a drill sergeant, but they don’t really mean it. She has a boisterous personality and intense athleticism, sure, but she also has a softer, empathetic side. She knows how to joke without offending, console without pitying, and push without straining.

These skills have made her one of the most successful graduates to come out of the Doctor of Physical Therapy program in Seton Hall’s School of Health and Medical Sciences. Since graduating in 2007, Buffy has improved the day-to-day lives of hundreds of patients spanning all ages, sizes, and walks of life — including a college football star.

An army brat, Wojciehowski grew up on a U.S. military base in Germany. She began playing soccer at age 6 and continued through high school. Several American colleges recruited her to play, and she chose Seton Hall because of its physical therapy program. She had wanted to be a therapist since age 13, when she hurt her knee and had to go to rehab.

“Everyone in the gym was great, they all helped each other, and I got better,” she recalls. “I thought it’d be a fun job.”

She immediately felt at home at Seton Hall, and excelled on the soccer field and in the rigorous math and science classes required for her degree. Six years into the seven-year program, she sat down with two of her professors, Genevieve Zipp and Cathy Maher, to talk about job prospects.

“I was like, I’m totally doing geriatrics,” Wojciehowski says. In high school, she had volunteered at a hospital for military veterans. “They were my favorite. They were inappropriate, they cursed, they told amazing stories.”

But Zipp and Maher thought her personality might be a better fit for patients with severe neurological injuries.

“I could see within her great creativity and compassion, and she was very motivating,” Zipp says. “She’s one of those people that you just knew from the beginning — she had it within her to change people’s lives.”

Wojciehowski took an internship in Kessler’s neuro gym, helping patients with Parkinson’s, multiple sclerosis and amputations. After just 12 weeks, the hospital offered her a full-time job. Now she spends every day in the spinal cord gym, working with paraplegics and quadriplegics. Most of her patients will be permanently disabled, making her job both physically and emotionally demanding. But she loves the challenge.

Wojciehowski’s passion is obvious every afternoon from 1 to 2:30, when she works out with 23-year-old Eric LeGrand, who was a defensive player on the Rutgers football team until the fall of 2010, when a tackle left him paralyzed from the neck down.

When LeGrand began working with Wojciehowski the following April, he couldn’t sit on his own or be placed in a standing position without getting dizzy. By December, he was able to hold a stable standing position, which meant he could start using a high-tech, custom treadmill called the Therastride.

Every day, Wojciehowski pushes LeGrand’s wheelchair up a ramp onto the imposing machine. She pulls down hanging metal hooks and clicks them into the blue canvas harness fitted over his shoulders and under his legs. Then, with the help of two locomotor technicians, she pulls his 260-pound body into standing position on the belt. One person from the Kessler team holds his left leg, the other his right, and the third stands behind him, stabilizing his hips. Then the belt starts rolling, and the three helpers manually move his legs in a stride so fluid that it almost looks normal. They do this for an entire hour, every single day, all the while rotating positions, chatting and laughing with their cheery and charming patient.

After fewer than 50 sessions with this locomotor therapy, LeGrand learned to sit up without any support. At first, he couldn’t do this for more than 10 seconds, but now he’s up to three minutes. His next goal is to regain some function of his arms. Wojciehowski hopes that one day he’ll be able to shake the hands of the politicians and famous people that he frequently meets as a spokesman for the Christopher and Dana Reeve Foundation.

LeGrand describes his beloved therapist as “intense” and “to the point,” but above all, a great motivator. “As much as you want to help yourself,” he says, “Buffy’s willing to help you.”

Virginia Hughes is a science writer and blogger based in New York City. She can be reached at virginia.hughes@gmail.com.