When I became director of the Monsignor James C. Turro Seminary Library in 2004, I set about improving my knowledge of our collection of more than 70,000 works. I also began to explore our archival material and rare books — works rarely seen by visitors, students or even the faculty. In the process of that exploration, I came upon a number of rare holdings now on display for the public. I share a few of my favorites here.
— Father Lawrence B. Porter 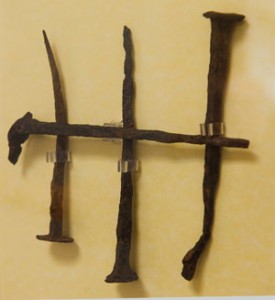 These nails were discovered in 1961 by Professor Ian Richmond of Oxford University’s Archeology Department while excavating the ruins of a first-century Roman fortress on the banks of the river Tay near the Scottish town of Dunkeld. Handmade by Roman metal workers, the nails were standard issue for engineers accompanying the Roman army, who used them to build forts and bridges. No doubt they are very similar, if not identical to, the nails used by Roman soldiers to crucify Jesus of Nazareth.

This choir book, of late-Renaissance style, was made in Florence about the year 1590 for a community of Dominican friars. The page features the antiphon (or opening song refrain) for the Feast of the Guardian Angels. Its hand-painted decorative initial letter portrays a drama appropriate to the holy day: an infant is shown with a threatening devil on one side and a protecting angel on the other, an illustration no doubt inspired by the Gospel according to Matthew 18:10, where Jesus says, “See that you do not despise one of these little ones, for I tell you that in heaven their angels always behold the face of my Father.” 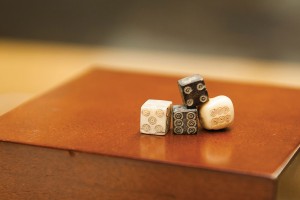 In the Gospel according to Matthew 27:35, it is said of Jesus: “After they had crucified him, they divided his garments by casting lots.” While the phrase “casting lots” can be interpreted to refer to various games of chance, when said of first-century Roman soldiers, it usually means casting dice. These two pairs of first-century Roman dice were discovered during archeological digs at the historic remains of Roman army encampments in England and Eastern Europe. One pair is made from animal bone, the other from ivory. 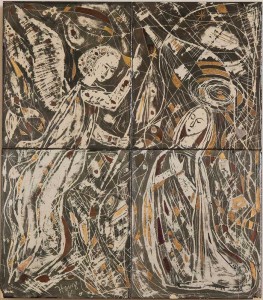 Fred Henze’s 1960 ceramic tile painting depicts “The Annunciation to Mary” (Luke 1:26-38). Born in Germany in 1904, Henze immigrated to the United States at 19. Noted for his religious art, which graces many American chapels and churches, Henze died in 1971 in his long-time home of St. Louis, Mo. This painting was a gift to Immaculate Conception Seminary by Monsignor James Turro, director of the seminary library from 1959-2004.

An Engraving of Noah’s Ark 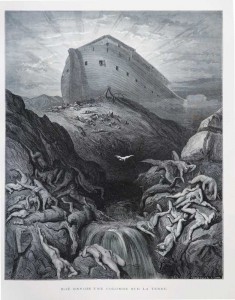 The library’s 1866 large-format, luxury edition of the “Bible of Tours” lies open to a page featuring Gustave Doré’s depiction of Noah’s ark. The “Bible of Tours,” a modern French translation done by two priest-professors at the Archdiocesan Seminary of Tours in the late 1840s, incorporates illustrations done by Doré (1832-1883), one of France’s most famous literary illustrators and engravers. This display copy was a gift from Bishop James Roosevelt Bayley (1814-1877) to his new diocesan seminary. 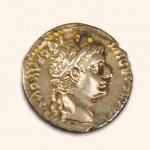 The denarius was the most common silver coin in Roman antiquity, and it is mentioned several times in the New Testament. But the most famous reference is in Mark 12:12-17 where Jesus, when challenged as to whether Jews should pay tribute — that is, pay taxes to Rome — says “Bring me a denarius and let me look at it.” He then asks, “Whose picture is this?” And when they reply, “Caesar’s,” he says, “Then give to Caesar what is Caesar’s, but to God what is God’s.” Pictured here is a denarius minted during the reign of Tiberius Caesar (AD 14-37) during which time the public ministry of Jesus of Nazareth occurred. I have used this coin many times in my course on the Church to open my lecture on Church/state relations and have recently donated it to the seminary library.

The Day the Earth Shook