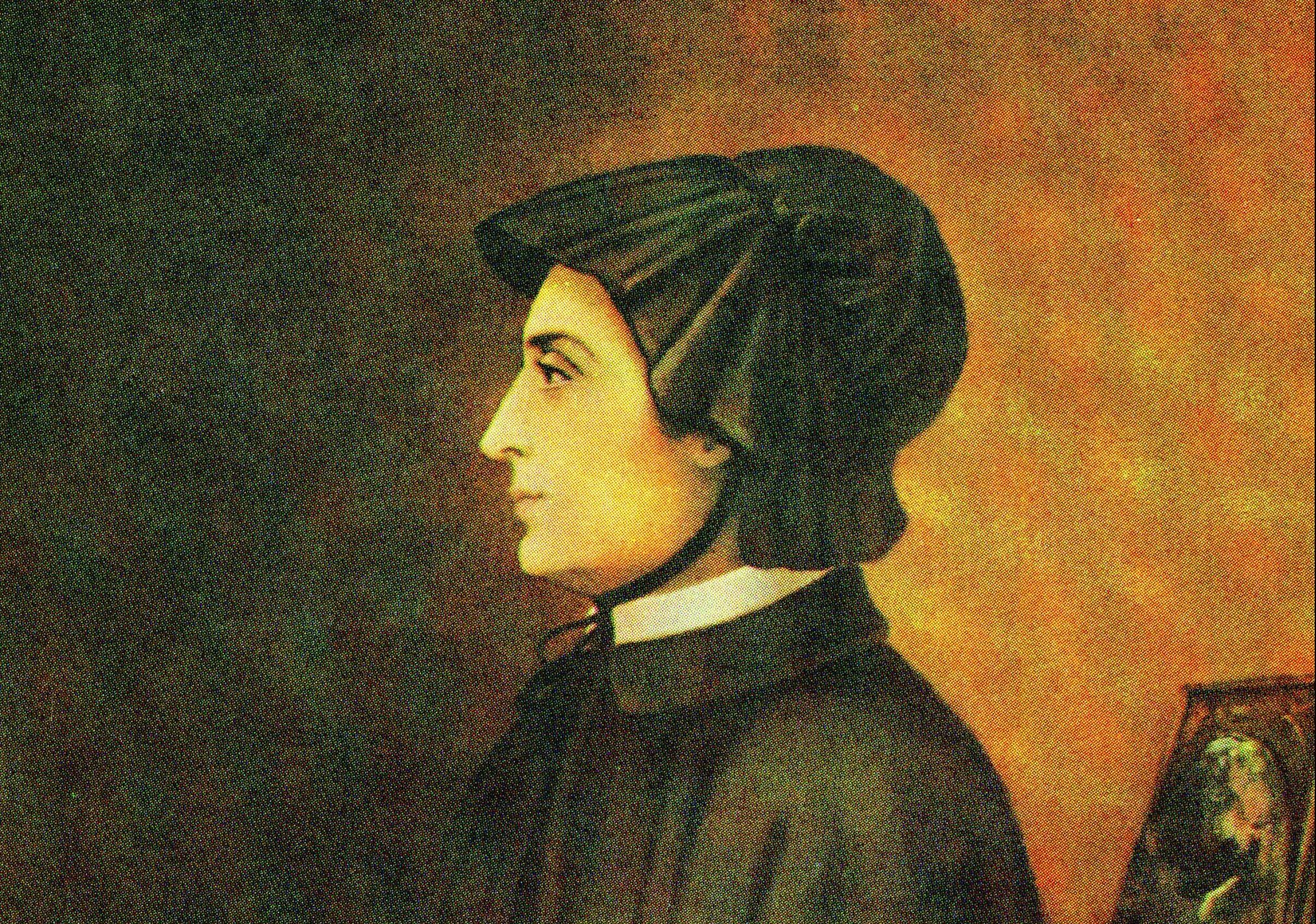 Dianne Traflet, associate dean of graduate studies and seminary administration at Immaculate Conception Seminary School of Theology, traces Mother Seton’s history from the 1790s through the early 1800s and finds parallels — and lessons — applicable to our own unsettling times.

In the series’ first installment, published in the Fall 2020 edition of Seton Hall magazine, Elizabeth witnessed the death of her beloved father from typhus, the prospect of her family’s bankruptcy, and the declining health of her husband from tuberculosis. Now, anxious to find a climate where William can recuperate from his disease, the Setons accept an offer to stay with friends in Europe.

In 1803, hopeful that her husband would experience better health in Italy, Elizabeth Ann Seton boarded the ship Shepherdess for a seven-week journey to cross the Atlantic with William and their eldest daughter, Anna. Their other children, including their fifth child, baby Rebecca, were left in the care of family and friends.

Elizabeth exuded prayerful serenity in the early weeks of the journey, “… confiding Hope and consoling Peace have attended my way thro’ storms and dangers that must have terrified a Soul whose Rock is not Christ.”

Upon arriving in Italy, Elizabeth happily ran with outstretched arms towards a relative, but was immediately stopped by a guard who instructed, “Do not touch!” Fear of yellow fever had gripped Europe, and William was falsely thought to be suffering from the disease. He, Elizabeth and Anna immediately were moved into a lazaretto — a quarantine station — in Livorno.

Faced with this unexpected and horrifying news, Elizabeth viewed her surroundings as a prison — dark, damp and bitterly cold. She cried alone in a closet so that her husband and daughter would not see her, yet she continued to look to heaven: “My eyes smart so much with crying, wind and fatigue that I must close them and lift up my heart.” She fervently prayed for William, whose health was deteriorating rapidly.

After 25 days, the family was able to leave quarantine. They moved to Pisa for a few days, but it was too late — William succumbed to tuberculosis two days after Christmas 1803.

Far from home and family, Elizabeth mourned her husband and faced an uncertain future in severe financial distress. She, who had co-founded the Society for the Relief of Poor Widows and their children, now was a single mother with five children under the age of 9.

And, yet, she stood and faced the heavy winds of hardship. Never would her husband’s family motto, Hazard Zet Forward, mean so much to her. How was she able to move forward despite the many obstacles and challenges in her life? What was the key to her resilience?

A profound answer may be found in Elizabeth’s declaration that “Faith lifts the staggering soul on one side. Hope supports in on the other. Experience says it must be, and Love says let it be.”

It seems like such a simple reminder: the reality of the power of faith, hope and love. For Seton Hall’s patroness, these words were not mere reminders, but a firm commitment to live what she believed, trusting in God’s power and loving guidance.

Elizabeth’s faith was not superficial. From childhood, she developed a strong prayer life, which was nurtured during her young adulthood. It was tested during William’s illness and death, when she wrote: “If I could forget my God one moment in these times, I would go mad.”

No, Elizabeth would not forget God, and she knew even in darkness that God did not forget her. She grew deeply in her Christian faith during the tragedies that came at frightening speed. She listened and waited for God’s Divine guidance, and discerning God’s will, she followed it on an adventure of faith.

Elizabeth’s resilience was not focused on “bouncing back,” but walking with steely determination and faith-filled focus. As she mourned William’s death, she accepted the kind invitations of the Filicchi family to travel the Italian countryside, visiting various churches, including the Benedictine monastery on Montenero. Slowly, witnessing the faith of the Filicchi family and engaging in many deep conversations about the Catholic faith, Elizabeth began to wonder if God were calling her from her Episcopal faith to Catholicism. She did not make any hasty decision, but she researched, asked questions and prayed. Spending considerable time in churches, and learning to pray the Memorare, she found herself attracted to the Eucharist, and to the Mother of God.

When she and Anna returned to the United States four months later, Elizabeth seriously and nervously considered the step she might take toward Catholicism, one that could mean negative repercussions from her Episcopalian family members and fellow New Yorkers. Anxious and alone, she spent time in a New York church where she had worshipped for many years, and there, she surrendered her misgivings to God. She felt a burden lifted and was at peace, and soon, in March 1805, she was received into the Catholic Church.

Remaining open to the Lord’s plan for her life, she beseeched God to help her to know His will for her. Hope remained her constant companion, “for it will not do,” she once explained, “for hearts and fortunes to sink together.”

Elizabeth’s resilience was rooted in a hope that did not simply declare “things will get better or easier tomorrow.” It was a hope that signaled a determined “Yes,” a resounding fiat to turning, with God’s grace, to the next chapter of her life: “Who can help looking back on past pleasures without sorrow. … I could cry like a child at the thought of them but resolved to brave the future. I turn over the Page with rapidity and looking toward Heaven there fix my aim. …”

To life’s agonizing questions, Elizabeth responded always with love — a love that never turned inward, but one that, by relying on God’s Divine Love, reached out in compassion to others.

Elizabeth Ann Seton’s resilience bears witness to a faith that turns to God in all circumstances, a hope that sees the present against the backdrop of eternity, and a love that gives from the depths of one’s heart, guided by Divine grace. To staggering souls, our patroness says confidently: Hazard Zet Forward in faith, hope and love.

Part two of two: The series began in the Fall 2020 edition of Seton Hall magazine.