Superstorm Sandy devastated families — and whole communities — throughout the metropolitan area.
Many in the Seton Hall community rushed to provide assistance. 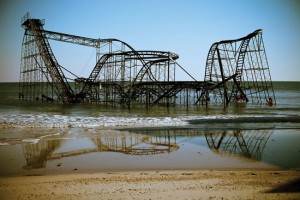 Yveline Dalmacy has had a lot of experience organizing humanitarian aid. In 2007, she helped send a container ship loaded with 1,500 boxes of clothes, toys, sewing machines, medical equipment and other supplies to her native Haiti following the twin disasters of Hurricane Noel and a devastating earthquake.*

Never did the diplomacy graduate student think she’d be on the receiving end of such assistance — especially not from her professors and counselors at the Whitehead School of Diplomacy and International Relations.

All of which may simply prove the old adage that “what goes around comes around,” she says, relating what has befallen her family since the effects of Superstorm Sandy hit her Coney Island, N.Y., home.

On Oct. 28, the day before the storm arrived, Dalmacy was preoccupied caring for her daughter Anabelle, 13 months old at the time. Also at home was her 21-year-old daughter, Tatiana, an undergraduate at Kennesaw State University. Her husband, Dr. Kesler Dalmacy, was away in Haiti.

Yveline Dalmacy was unaware that a 14-foot tidal surge and 80-mile-an-hour winds were hours away from her front door, which she says is “about 10 steps from the ocean.”

She received a phone call from a friend, asking: “Did you evacuate?”

Dalmacy was stunned by the question, saying she “had no idea there was an evacuation in effect.” She and her older daughter quickly gathered a few odd items, then fled by car with Anabelle through their nearly vacant neighborhood.

“I didn’t even take time to pack because of a mother’s fear that the water would engulf us,” she says. Behind them, most of their possessions would be destroyed by the mass of water. It was so bad that a neighbor two doors down drowned, she says.

“Yveline is quite a remarkable student,” says Elizabeth Halpin, assistant dean of external affairs for the School of Diplomacy and International Relations. In 2010 she worked with Dalmacy on a campus awareness program on the plight of Haitians after the earthquake that year.

Dalmacy, 45, left Haiti at age 13 to come to the United States, where she became a citizen and prospered. She earned high school, undergraduate and M.B.A. degrees, and worked for a while at the nonprofit aid organization Oraiso, where she was involved in relief work for Haiti.

By 2000, she had landed a prestigious job at Morgan Stanley’s private banking practice in New York. But the tug of her husband’s work as a physician and politician in Haiti — he ran for president in 2010 — in combination with her own desire to help her native country, led Dalmacy to the School of Diplomacy and International Relations. She now is a few credits away from a master’s degree with specializations in global health and human security, and international economics and development.

Thanks to Superstorm Sandy, however, Dalmacy’s graduation will be later than expected. In fact, not much has been expected. Her first port in the storm was a friend’s house in New York, “who was willing to take us in,” she says. But, realizing she needed to be independent, Dalmacy booked a room at a New Jersey hotel “that was the only place I could find.”

She was driven by fear that there would “be no food, water or milk for my baby.” And that, she says, is exactly what happened. Worse, at the hotel, “we did not have power or water for two days. It was horrible.”

Meanwhile, deadlines were looming for a major paper.

So, Dalmacy managed to get a message to Professor Martin Edwards that she was “going to be late in getting it done.” 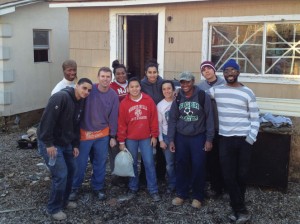 That’s when Halpin and others at the school rallied to begin a drive to help the family. What was needed most were warm clothes for Anabelle; they immediately started to pile up in Halpin’s office until Dalmacy was able to collect them.

Dalmacy was leading a nomadic existence, moving from friends’ homes to motels and back. She was also dealing with the Federal Emergency Management Agency and insurance companies, and coming to grips with her family’s losses after 22 years in their home.

How bad was the devastation? “We had just redone the kitchen,” Dalmacy says. “When I returned, I found my refrigerator sitting on top of the kitchen counter. Everything was gone, swept away by close to six feet of water. It was the most devastating feeling you can ever go through.”

The help from Seton Hall was a pleasant surprise. 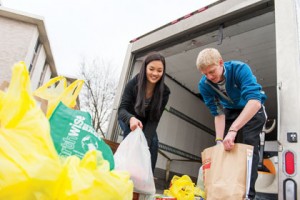 “They collected food, clothing — mostly for the baby — diapers, kitchen utensils and other items. They even provided me with a small monetary donation.” Dalmacy credits Halpin for proving a “huge, huge support” as her liaison with the school’s group. All her professors pitched in, Dalmacy says, with some sending her books “because I lost my library, which included books I’d been collecting since high school.”

Something else arrived, too: a note from Ursula Sanjamino, one of the school’s two associate deans. It read, in part, “Just a few items from my daughters and me for your little one. Continue to believe things will get better. They will. Stay safe and strong.”

“When I read that, it brought tears to my eyes,” says Dalmacy. “I had no idea that my school was going to step up, but the next thing I knew the school was holding a drive for me. I don’t know how I would have gotten through without their support.”

Sanjamino offers a simple explanation: “We have a very strong sense of community at the School of Diplomacy and International Relations and we support each other in difficult times.”

Today, although still homeless, Dalmacy feels lucky to be both alive and connected to the South Orange campus.

“I’ve always been proud to be a Seton Hall student. But I did not realize how lucky I was to be a part of this community until this disaster struck.”

Asked to sum up her recent experience, Dalmacy had this to say: “The thing I want people to take away from my story is that whenever you have a chance to do good, do good, because although altruism is its own reward, you never know when it will come back to you.”

Superstorm Sandy caused more than 30 deaths in New Jersey and at least $29.4 billion in damage, according to official reports. But the storm’s destructive path left the campus relatively unscathed and fully functional, which allowed the Seton Hall community to quickly reach out to those in need.

Here are some of the ways Seton Hall responded:

“Any time there’s a local or national disaster, Seton Hall responds,” says Michelle Peterson, director of the Division of Volunteer Efforts (DOVE). After Hurricane Katrina in 2005, the University sponsored 23 New Orleans university students who began to call Seton Hall home that fall. “When this hit, people immediately started to ask how Seton Hall would respond.”

The answer was impressive, with DOVE coordinating donations (totaling $10,166.50) on the school’s website and collecting clothing and food at its offices and at 15 drop-boxes around campus.

The DOVE offices in Boland Hall repeatedly filled up “to the point where we couldn’t even move around,” says Peterson. That’s when vans would deliver the goods to Catholic Charities, Newark, to replenish food pantries and create new distribution mechanisms where pantries had been destroyed.

When Tara Hart, director of Housing and Residence Life, and her staff realized the school had not lost power, and that even Internet and cable television service were working, her team sent out a Pirate Alert query asking: “Are you disposed to help a fellow Pirate in need?” Resident students were asked to host stranded or commuter students unable to get gasoline. Of the nearly 1,000 students who stayed on campus while the University was closed, 141 quickly opened their doors, saying, as Hart puts it, “Yep, come crash on my floor.”

Hart’s team facilitated the influx of 66 students, the last of whom stayed for two-and-a-half weeks. To combat boredom, residence hall leaders staged entertainment and get-togethers, including movie nights, game nights, parties and pingpong tournaments. “It was a testament to student leadership,” Hart says. “We’re at our best when emergency situations arise.”

The student-run radio station raised $9,535 for Superstorm Sandy relief efforts, surpassing the station’s goal of $8,950, during an 18-hour radio-athon held on Nov. 30. Donations from 111 listeners were equally distributed between the Hurricane Sandy New Jersey Relief Fund and the Empire State Relief Fund.

“During the storm, we had 13 students who volunteered essentially to lock themselves into the station for a 48-hour period — and they worked in shifts,” Maben explains. He said the students didn’t venture outdoors with microphones, yet “filled the gap when it came to local coverage.” The list of announcements included news reports, lists of what was closed, interviews with local, state and Red Cross officials and updates from the University’s Emergency Management staff.

The Department of Athletics collected blankets, clothes, shoes, cleaning supplies and other provisions and took them to local shelters in Pirate vans, says Matthew Sweeney, assistant athletics director of communications.

Pirates also shared their basketball courts with teams needing a place to practice because their facilities had been damaged by the storm. Among these were teams from Saint Peter’s College in Jersey City, Wagner College on Staten Island, and Monmouth University in West Long Branch, N.J.

“In moments of crisis or a natural disaster, it’s important to lend a hand wherever we can help,” explains men’s basketball head coach Kevin Willard.

Thomas E. Giordano’s 20-person emergency response team was prepared for the storm. Giordano, assistant director for emergency management, ensures that essential services — IT, facilities, housing and health services — are maintained at all times.

At the time Sandy hit, more than 100 students, faculty and staff had gone through a 20-hour training program run by the federal government called CERT (Community Emergency Response Team).

The training paid off.

Though the University never lost power, surrounding towns did. Giordano set up an emergency operations center within Walsh Library, where he repeatedly met with South Orange officials. Giordano lived in the center for two days, sleeping on a cot. A small number of South Orange residents needed a place to sleep and others needed the use of power outlets, mostly to recharge cellphones.

“The biggest single problem you have in an emergency is communication,” Giordano says. The University’s Pirate Alert system sends out messages via texts, emails, cell lines and land lines.

From the emergency response center in Walsh Library, Hyland sent out messages on social media that mirrored the Pirate Alerts and responded in real time to Twitter and Facebook inquiries — which amounted to about two dozen each day.

“Parents just wanted to talk, to know that everyone was OK and that power was still on,” he says. Students with concerns about driving in were relieved to find that classes had been canceled. Others were glad to hear that registration deadlines would be extended.

Christopher O’Brien, director of clinical education for the School of Health and Medical Sciences’ department of athletic training, led eight students and two faculty members to Staten Island to clear debris. O’Brien has a history of helping out after hurricane disasters that he says started after watching the devastation of Katrina on TV.

Staten Island native Dr. Thomas Bottiglieri suggested that O’Brien and his team work with the relief agency Guyon Rescue. Two-and-a-half weeks after the storm, the group arrived at what looked like a war zone in Oakwood Beach, O’Brien says, and filled two large municipal dump trucks with debris. The sight that most impressed him was a staircase rising from a slab of concrete where someone had put an American flag at the top of the stairs.