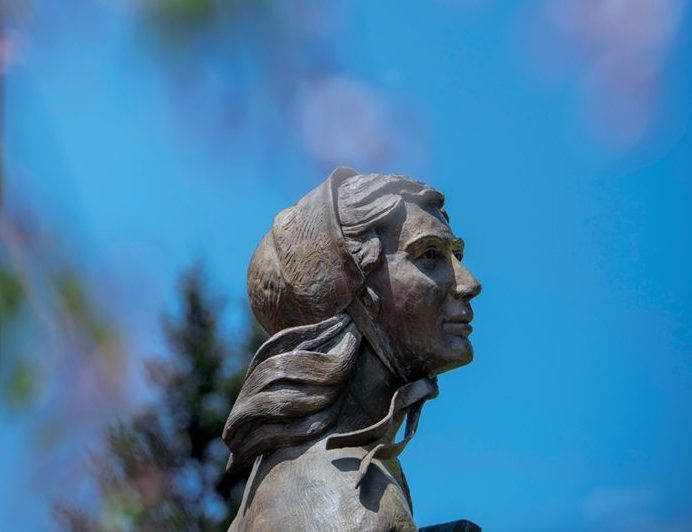 Our patroness was no stranger to the consequences of deadly infectious diseases. Her experiences offer parallels—and lessons—for our own unsettling times.

Elizabeth Ann Seton was hardly out of her teens when she realized just how idyllic, even heavenly, her life was. She was married to a wonderful, loving husband from a prominent family. She had a prestigious home and countless friends and acquaintances, including George Washington. She was happily expecting her first child. It seemed like a scene from “Lifestyles of the Rich and Famous,” circa 1794, New York City.

But all was not well. Elizabeth was worried. Her husband, William, was struggling with persistent fevers and coughs, and the city was anxiously bracing for a possible outbreak of the yellow fever epidemic that had devastated Philadelphia. Her father, Dr. Richard Bayley, kept Elizabeth informed about the epidemic’s dangers. A renowned surgeon and chair of anatomy and surgery at Columbia College, Bayley issued public warnings, researched the conditions that might spread the disease, and outlined preventative measures.

When yellow fever reached New York in the summer of 1795, many wealthy residents fled to the country. The Bayley and Seton families knew many people who contracted the disease and mourned those who died from it.

By the time winter arrived, the epidemic had disappeared. Bayley continued his work, writing a study of yellow fever in New York City and cautioning residents of its possible return. In 1796, New York Gov. John Jay appointed Bayley as health officer of the Port of New York, the first person to hold such a position. Within three years, Bayley authored the Quarantine Act of 1799, the same year that yellow fever returned in full force to New York. With Bayley’s assistance, a quarantine station and a marine hospital were established on Staten Island, where he went to work and live.

For Elizabeth and her family, the latter part of the 1790s was filled with both joy and fear. As they celebrated the births of two children, they also faced serious debt in the family shipping business. Bankruptcy loomed. Elizabeth assumed clerk responsibilities, meticulously tending to the paperwork.

She grew increasingly exhausted as she cared for her young children as well as William’s five stepsiblings, who had lost their mother in 1792. She became more than a sister to them in 1798, when her father-in-law, William Seton Sr., fell near his home in lower Manhattan and died from his injuries, leaving no will. William and Elizabeth moved into his Stone Street home, caring for all the children, soon including their third child, Richard Bayley, who initially was very ill.

When the new century began, the Setons’ financial problems worsened, as did William’s physical health, a constant challenge since his late teens. Diagnosed with tuberculosis, he could not afford to rest or focus on recuperation; there were urgent bills to pay, and debtors’ prison loomed. Elizabeth, too, was severely fatigued and worried.

The day after Christmas 1800, Elizabeth was required by the bankruptcy commission to write an exhaustive inventory of the family’s possessions, including handkerchiefs and the children’s clothes.

The following summer, Elizabeth and the young Seton children moved to Staten Island, living in quarantine with her father while William stayed in the city to tend to his business. Elizabeth watched her father comfort the sick and the dying. When a ship arrived with passengers suffering from typhus, he instructed his daughter to keep a distance, but she saw their pained expressions and heard their anguished cries. “I cannot sleep,” she wrote, “the dying, and the dead, possess my mind.”

One day, she found her father sitting slumped near the docks, his head in his hands. He had contracted typhus. For days, Elizabeth tried to comfort him, as he clung to her, gasping in pain. He took his last breath with her by his side.

No stately burial would be allowed for Dr. Bayley, since the quarantine had to be kept even in death. A boatman brought his body to a neighboring town for burial, and family and friends were told to keep their distance as a minister offered prayers in the churchyard.

While Elizabeth mourned her father, she was acutely aware that her husband’s tuberculosis was worsening, and the couple decided to travel to Italy, hoping William would recuperate in a better climate. He had been an apprentice to the prosperous Filicci family in Italy before he was married, and now he accepted their gracious offer of help.

Part 1 of 2. The series’ next installment will continue in the Winter/Spring 2021 edition of Seton Hall magazine.