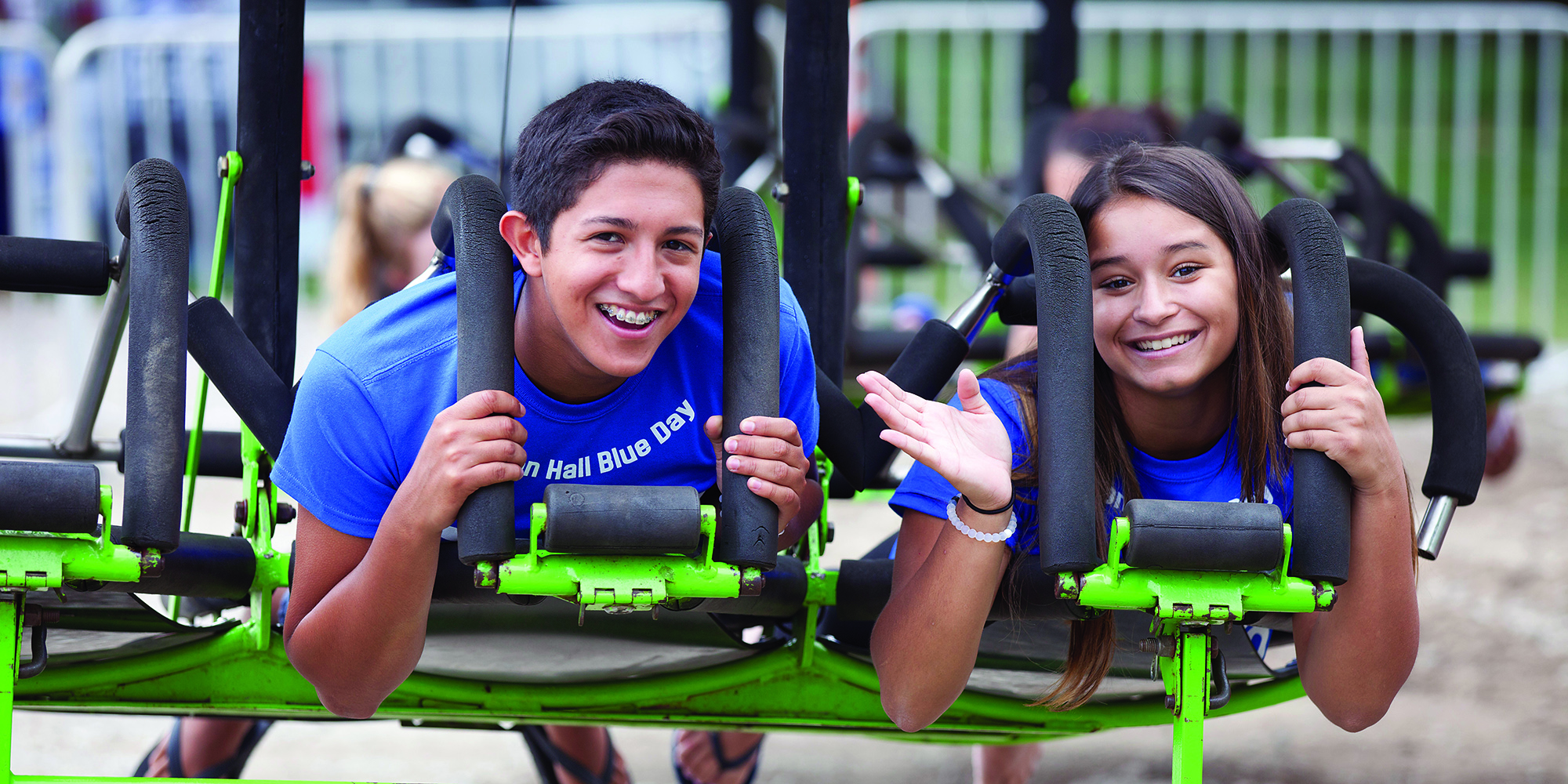 Scenes from weekends at Seton Hall

Weekends used to be a quiet time on campus, with most students heading out to visit families or friends.

These days, Seton Hall buzzes with energy and events every day of the week during the school year. From free outdoor movies to blue-themed festivals to sporting events and danceathons, it’s easy to stay busy without ever leaving campus. And then there are the sponsored trips — to Red Bulls soccer games, paintball sessions and whitewater rafting outings — not to mention the slate of excursions to Broadway shows and the hottest pop concerts. There’s also the ever-popular Seton Hall Weekend, which students and alumni can enjoy.

The change in campus atmosphere has been marked. Older alumni may remember a university primarily geared toward commuters, with empty parking lots and few activities when classes ended Friday afternoons. This past year, however, 80 percent of the student body stayed in South Orange three or four weekends each month as a result of greatly expanded activities offered by Student Services and other University departments.

For instance, all freshmen living on campus now take part in the Department of Housing and Residence Life’s “First 56 Days” program of activities that help them make friends, learn life skills and get to know the area. Parents are reminded, “If your student ever tells you that they have nothing to do, tell them to take a look on the back of their bedroom door.” There hangs an oversized calendar full of activities every day of the week from late August through the end of October.

At Seton Hall these days, there’s something for everyone to enjoy. What follows is small sampling of weekend events students could take part in over the past year.

Student actor-singers pulled on Victorian hats, tuxes and poufy gowns for this classic Stephen Sondheim musical. The South Orange Performing Arts Center hosts Seton Hall student performances — including this theatrical one — only a mile from campus in its 439-seat mainstage theater. Whether performing or watching from the audience, students say these productions are not to be missed.  Last year’s lineup also included The Good Doctor and the Broadway hit The Way of the World.

Students got the chance to hear firsthand from Brandon Stanton, the photographer and blogger responsible for the wildly popular “Humans of New York” blog.  Stanton photographs ordinary people on New York City streets and shares their personal stories with his millions of followers on social media.

Gentlemen of the Hall

You can catch this popular a cappella group performing all around campus — and off campus too — on almost any given weekend. Last semester they hit PirateThon, Pirate Preview, a scholarship reception and several other events. They opened for a professional a cappella group on campus in April and were even tapped to sing the national anthem at a Mets game in 2014.

All the artwork in “Vivedly Obscure,” an art exhibition in the Walsh Gallery, was submitted by Seton Hall students and selected by a panel of professional artists. The media and subject matter varied as much as the students themselves — from photography to fine art to graphic design. A nighttime reception included the awarding of Best in Show and honorable mentions, and offered the student-artists a chance to meet attendees and discuss their work.

Last fall, more than 260 students sprawled out on towels and blankets spread across the University Green to watch Jurassic World together — before it even came out on DVD. The Student Activities Board organizes these free screenings of recent releases (last year included Minions, Creed, Pitch Perfect 2 and Inside Out) and even supplies the snacks. When it’s chilly or raining, the show moves inside to the University Center. Occasionally things go retro, including a Back to the Future screening last fall — for which an original DeLorean came to campus.

Just steps from campus, Irvington Avenue fills up with 15 food trucks, two stages, three live bands and a craft beer garden for this annual fete. Sample everything from empanadas to lobster rolls to Thai fare, then top it all off with some banana soft-serve ice cream, Belgian waffles or decadent cupcakes. This street festival is fun for anyone, but a special delight for student foodies.

Thanks to years of brain training, Jim “Mind Over Man” Karol has been voted the World’s Greatest Mentalist and has appeared on almost every talk show out there. His high-energy live shows are more about “the science of brain power” than “magic,” and every Welcome Week he dazzles Seton Hallers. Feats include memorizing a shuffled deck of playing cards in under a minute, pinpointing information about audience members and knowing an absurd number of ZIP codes (80,000) and digits of pi (also in the thousands).

On Friday afternoons, students can head over to the fitness center and take an indoor cycling class set to motivating music — burning up to 620 calories in the process!

On certain fall Saturdays, students, alumni and Seton Hall employees — usually about 350 people — volunteer together in Essex and Union counties. This is a chance to stop texting and instead use your hands to paint, landscape, prepare meals or clean up local rivers and parks. Volunteer sites include the Community Food Bank, Cerebral Palsy of New Jersey and the Jersey City Cemetery.

This annual dance marathon benefits The Valerie Fund — a local nonprofit that supports children with cancer and blood disorders. Saturday night through Sunday morning, teams dance for 12 straight hours, pulling out everything from the “Cotton-Eyed Joe” line dance to moonwalks.

Seton Hall and Rutgers have been rivals in men’s basketball for a century. They face off annually in this game, battling for a wooden Jersey-shaped trophy — and bragging rights, of course. Before tip-off, Seton Hall hosts Bounce ’n Trounce for 24 hours where students must keep a blue-and-white basketball constantly bouncing.

The Department of Housing and Residence Life sponsors a yearly outing to this beloved religious festival. A salute to the patron saint of Naples, the event draws more than a million people to New York’s Little Italy for music performances, food, lectures, live radio broadcasts and even a cannoli-eating contest.

Mass at the Chapel of the Immaculate Conception

Inside the beautifully renovated, 150-year-old chapel, students, faculty and community members worship side by side. Weekend masses accommodate any schedule, with four options on Sundays and two on Fridays.  The chapel is also a favorite for alumni weddings.

Coachella provided the inspiration for this year’s Spring Fling Carnival — a Seton Hall tradition. A Ferris wheel and other rides fill Galleon Lawn, as do thousands of students. There are fried Oreos, cotton candy, funnel cake and other carnival treats, and the Seton Hall Pirate celebrates his birthday. This year, the Filipino League surprised attendees with a flash mob — proving that no one can predict what will happen at the carnival.

Giving Out Toy Tags at Masses

As part of Seton Hall’s annual Christmas Toy Drive, toys for needy children are collected throughout December. In November, students distribute tags with a child’s gender and age to people donating new holiday gifts. Collected presents are wrapped, then sent to families in need.

More than 125 people turned up for the premiere of Six, a documentary film that students from the College of Communication and the Arts made and edited. It chronicles the life of six senior citizens from South Orange, and debuted in a screening at the South Orange Performing Arts Center.

Watch the Mets/Yankees rivalry firsthand at Citi Field — and cheer on your favorite New York team. Last year the Yankees ended the Mets’ 11-game winning streak in Game 1 of the series, held at Yankee Stadium.