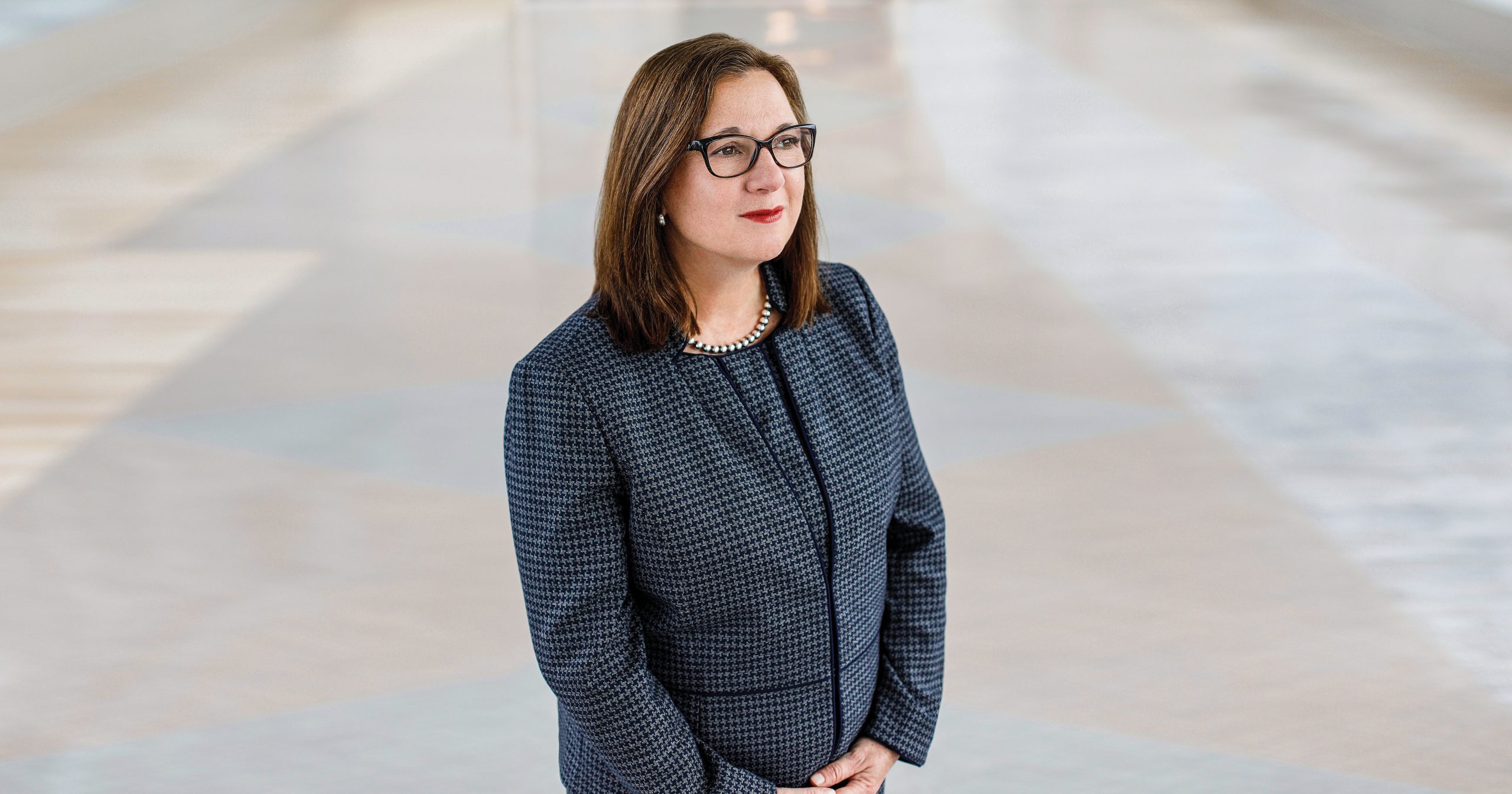 Published April 20, 2020
The president of Morristown Medical Center, Trish O’Keefe, M.S.N. ’94/Ph.D. ’14 is
known for her compassion and dedication.

It may be an exaggeration to say that nursing is in Trish O’Keefe’s DNA, but not much of one. Her mother, her aunts and her cousins were nurses. Her long career in nursing administration also has a family genesis: Her mother was a nursing home administrator. But O’Keefe’s rise to the presidency of Morristown Medical Center can also be attributed to her dedication, acumen and a generosity of spirit that earned her a reputation as the hospital’s “guardian angel.”

O’Keefe, who worked as a nurse’s aide as an undergraduate at Wilkes College in Pennsylvania (now Wilkes University), started as a bedside nurse on an orthopedic unit in Morristown Medical Center. She was drawn to nursing, she says, “because I enjoyed caring for people.”

As her responsibilities broadened, she discovered something else she enjoyed. “l liked being part of advancing the nursing profession.” As a supervisor on the orthopedic unit, she recognized a need to develop her administrative skills, so she applied to Seton Hall’s College of Nursing, receiving an M.S.N. in 1994. Later in her career, she returned to get her doctorate, graduating in 2014.

“She was always driven,” recalls Marie Foley, dean of the College of Nursing, who notes that it took great “fortitude and persistence” for O’Keefe to complete her doctoral degree “while working full-time in huge leadership roles at the hospital.” Those roles included chief nursing officer and later, chief experience officer, overseeing patient care departments and services. Under her leadership, the hospital was designated an American Nurses Credentialing Center Magnet Hospital for Nursing Excellence four times — a testament to her dedication to the Seton Hall philosophy of “servant leadership.”

She sees herself as serving a community comprising patients and their families, as well as the hospital’s staff and volunteers. When, for instance, it became clear two decades ago that patients in northern New Jersey didn’t want to travel to New York City for cancer care, she focused on developing the hospital’s Carol G. Simon Cancer Center. Recently, the medical center and its parent company, Atlantic Health, partnered with TGen, a national pipeline for clinical trials, so it could offer the same kind of cutting-edge trials available at New York’s top medical institutions.

O’Keefe was named interim president in 2015, becoming president in 2016. Unusual for the time, she rose to the position from the ranks of nursing and patient care administration. “But times are changing,” O’Keefe says, noting another nurse-president in New Jersey, Mary Ellen Clyne ‘87/M.S.N.’93/Ph.D.’12, who heads up Clara Maass Medical Center in Belleville and also received her Ph.D. from Seton Hall.

Thanks to her nursing background, O’Keefe is hands-on in a way that many in her position might not be. William Bruen Jr., a hospital trustee and volunteer, notes that “she’s always willing to get up in front of a luncheon of volunteers or a group of doctors or nurses.” That intimate sense of connection, Bruen says, “has translated into extremely high patient satisfaction, especially with the quality of the nursing staff.”

O’Keefe continues to integrate nurses more actively into the hospital’s decision-making process. Allowing also help shape policy is part of the reason Morristown Medical Center was named both “Best Hospital in New Jersey” by U.S. News & World Report and “One of the World’s Best Hospitals” by Newsweek in 2019 and 2020.

O’Keefe is also loyal to the university that helped shape her. She routinely facilitates clinical experiences at the medical center for Seton Hall’s nursing students, and she was a member of the President’s Advisory Committee. “If ever we call on Trish for assistance,” says Foley, “she always gives willingly of her time.”

That generosity is emblematic of O’Keefe’s leadership and her ability to maintain, in Bruen’s words, “the feeling of a community hospital in what’s become a large, sprawling medical center. To have a nurse running the hospital,” he adds, “gives the hospital heart.”