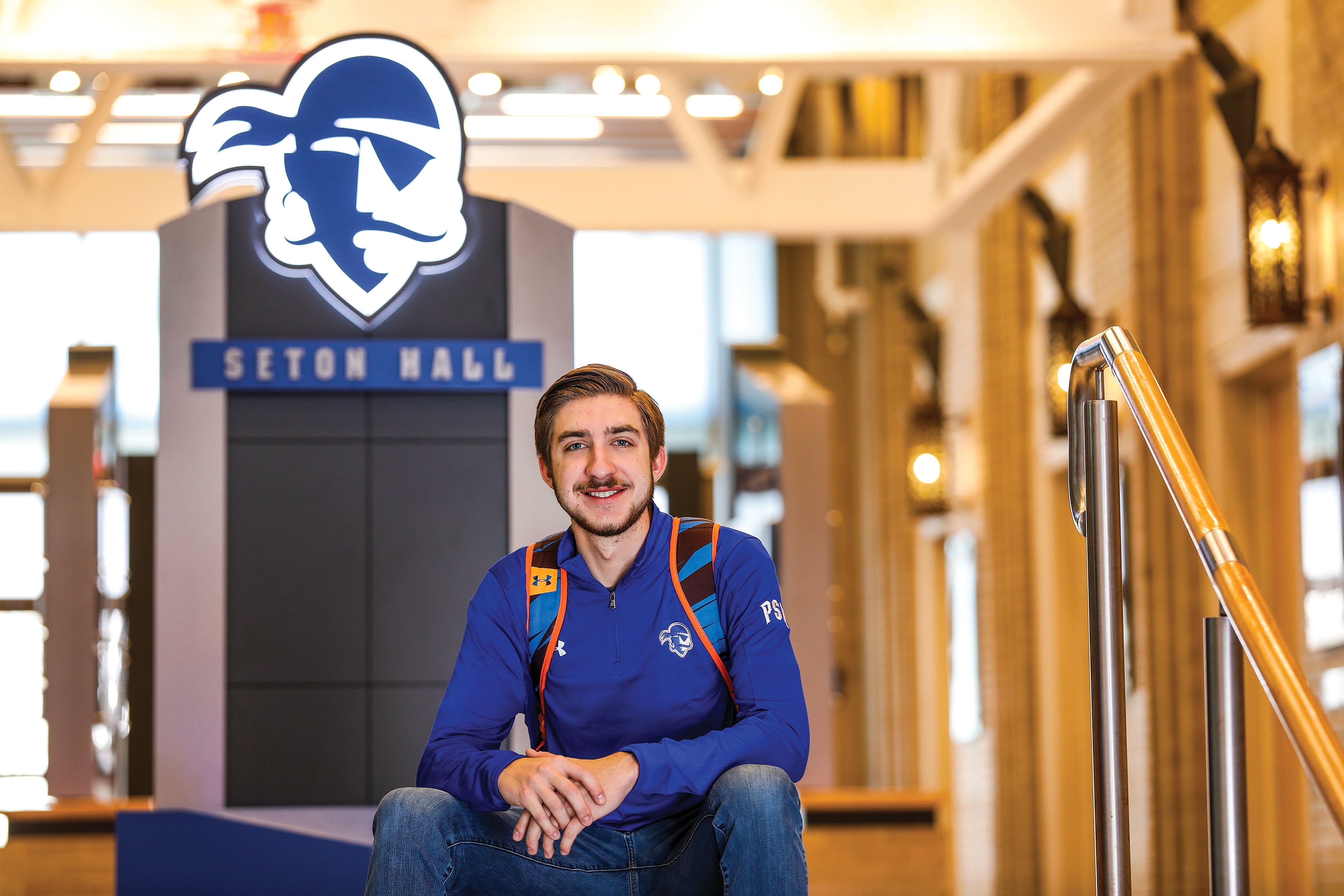 Even at a young age, Dagen Hughes felt called toward broadcasting.

Since coming to Seton Hall, the College of Communication and the Arts student has explored every avenue of the business, working behind the camera on Pirates games and serving in both play-by-play and analyst roles. Displaying both a sense of humor and sense of adventure, his “Dagen Plays All the Sports” videos include him competing with a number of Pirate athletes.

But the college senior has flourished as a producer of live game action, where he calls all the shots and leads a full crew. “You’re not the guy everybody knows about,” Hughes says of that position, “but you’re the one putting on the production. I like being the guy in charge. This may sound bad, but I like being the one ordering everyone around,” he says with a laugh.

Considering his accomplishments in that position, Hughes has no need to apologize. In addition to his work with the Pirate Sports Network, Hughes produced soccer games for the Big East Digital Network via Fox Sports GO. Hughes and his team started working with Rush Media out of Wisconsin, a production company that also provides broadcast trucks and crews across the country, and traveled to the Midwest to learn about all the gadgets in the truck.

“We got inside and I was like, good grief, there’s a ton of stuff in here that we’ve never had before,” Hughes says. A graphics computer and replay machine were just two of the items that changed everything about Seton Hall’s productions. “Having all these new toys to play with was fantastic. It has everything you’d see in a big-time production truck.”

The Seton Hall crew uses the truck on Pirate Sports Network games, including soccer, volleyball and women’s basketball. Those are student-run productions in all aspects. But on Big East Digital Network and Fox productions, Rush also provides an experienced crew.

The man still in charge of everyone? Hughes. Overseeing those games and the workers who have been in the business for years is a lot of responsibility for someone still in school — but Hughes thrives. “When you tell them you’re a student, a lot of them are very shocked,” Hughes says. “They’re all very respectful and they understand, hey, these guys at the end of the day are still students so we’re still learning about the truck, stuff goes wrong, but you’ve gotta be able to figure it all out.”

His ability to do just that impresses experienced pros. Rush Media’s senior coordinating producer, Kevin Brellenthin, has worked with Hughes on the broadcasts and says, “A big part of what makes Dagen so good is he can remain calm and troubleshoot during those times when something goes wrong. He just has a cool demeanor and is a problem solver, not someone who gets bothered very easily.”

Hughes wants to keep producing after he leaves Seton Hall, believing a career behind the camera, directing, leading, guiding the entire show, is the right path.

Producing is in his blood now. When he watches a televised game with friends or family he notices camera angles and the thought behind them that those not in the business would never see. His ultimate dream? To produce ESPN’s famed “College GameDay,” the network’s long-running Saturday morning football preview show that airs from different campuses. It’s a lofty goal, but when you hear a veteran producer like Brellenthin talk about Hughes, there’s no doubt he could make it happen. “He doesn’t treat it as an internship,” Brellenthin says. “He doesn’t treat it lightly. He treats it like it’s his job to put a good product out there. He takes pride in it. What I tell any other school that wants to get into stuff like this and wants to do their own broadcasts: Make sure you have the Dagens of the world.”

Fortunately for the Pirates’ sports teams and all of its broadcast outlets, Seton Hall has had him for four years.