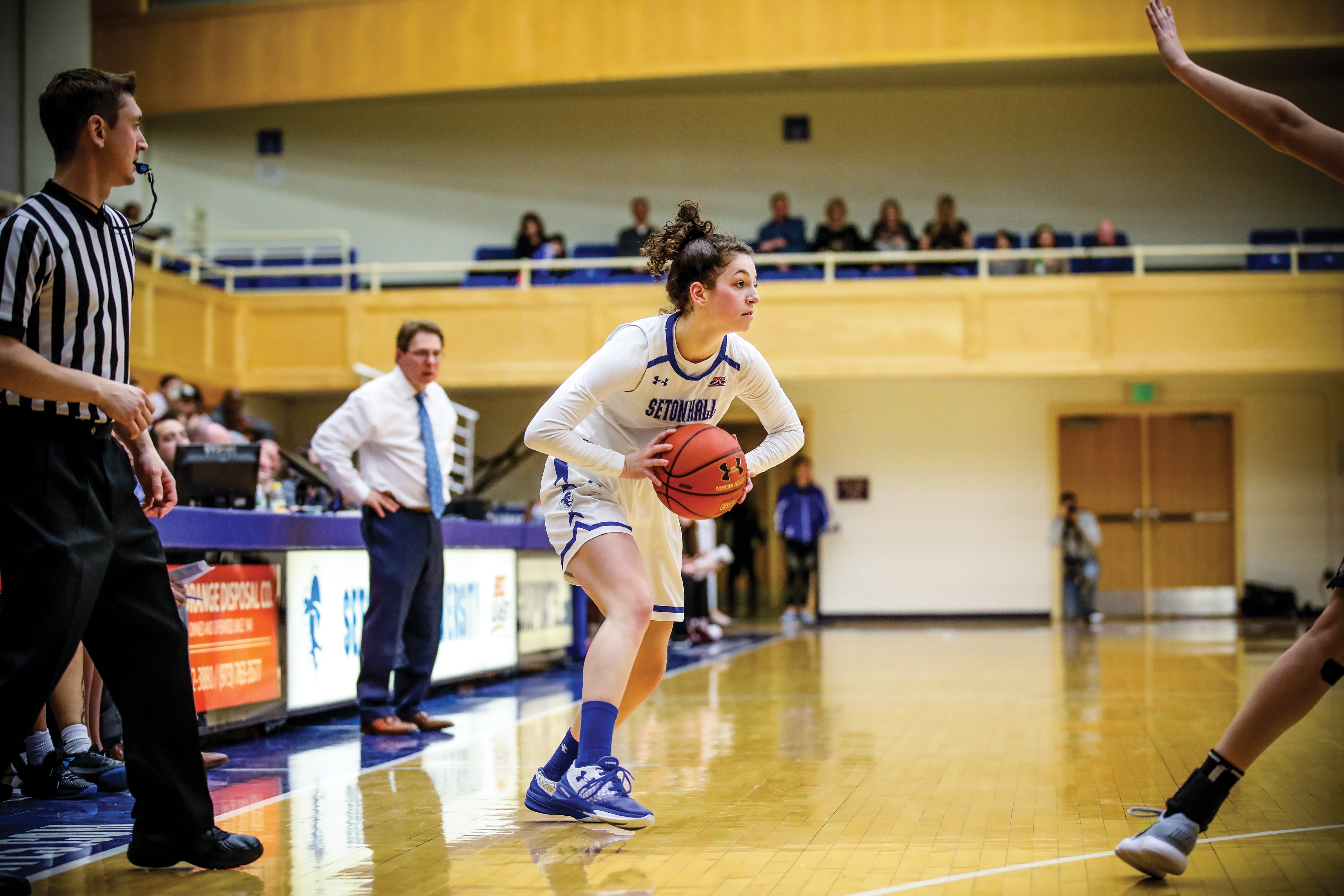 No matter her position on the court, Kaity Healy says she ‘tries to do the little plays that nobody likes to do, like taking a charge, getting a steal, getting a stop on defense.’

When Kaity Healy became captain of Seton Hall’s women’s basketball team three years ago, she hadn’t yet played a single minute for the Pirates.

The graduate of Colts Neck High School in New Jersey sat out her first season with the Pirates as a redshirt. And yet, before the start of the following season, and before she’d seen any game action, she had taken over as a leader of the Pirates.

“I didn’t name her a team captain,” says head coach Tony Bozzella ’89. “She earned the captaincy. She did a great job of becoming a leader. She had to earn it with her work ethic. … She was a good captain at the beginning, and now she’s become a great captain.”

Healy remembers Bozzella telling her about the new role “about five minutes before he told the team. I was in a little bit of shock as well, but I was like, OK, whatever you need, Coach. I was so happy, and at the same time so nervous, but my teammates had my back, the coaching staff had my back, so it was a really easy transition.”

Leadership may have come naturally because of Healy’s upbringing. Her mom, Jeanene, played basketball at Wagner College and then coached her daughter through high school. Healy’s dad, Robert, played soccer at Greensboro College, but quickly transformed from a soccer guy to a basketball fanatic as she progressed with the sport. Her folks were her biggest supporters and role models. “They instilled in my sister and me a very blue-collar work ethic,” Healy says. “Nose to the grindstone, don’t worry about anything else, and the most important thing is the team.”

At practice and during games, Healy has adapted to whatever the Pirates needed. A 5-foot-6 point guard when she played in high school and during her first years with the Pirates, in her final season on the court at Seton Hall, with the team’s new system, Healy started playing off the ball as well, a role change that saw her shooting the ball more. No matter her position on the court, she says she “tries to do the little plays that nobody likes to do, like taking a charge, getting a steal, getting a stop on defense.”

Healy — an accounting major who is also getting her master’s in the same field — altered her on-court play, and also adjusted her leadership style during her three years as a captain, saying, “The first couple of years I would definitely say it was more lead by example, and this year, because it’s my last year and I feel like I’ve grown so much as a person, I try to be a bit more vocal and still lead by example.”

Bozzella recruited Healy early out of high school, and when she was just a sophomore she committed to Iona College, where Bozzella coached before taking over at Seton Hall. She ended up following him to South Orange, where he watched her mature into her role as a captain and grow on the court as the strength work she put in during her redshirt season paid off. “She’s much more vocal and holds the kids a lot more accountable,” he says. “I think early on it was hard for her, but she had to take that mantle and she did. It was important that she do that if we were going to be successful.”

When Healy finishes playing, she wants to follow both her mother and Bozzella into the coaching world. But she’s also inspired by trailblazer Edniesha Curry, an assistant coach for the men’s basketball team at the University of Maine, who has a unique role in the male-dominated field.

Healy explains, “My ultimate goal would be to be a men’s college coach, either professionally, but mostly college … I feel like I have a really good I.Q. and feel for the game so hopefully I can just get an opportunity and get my foot in the door.”

When she does become a coach, she’ll surely look for strong leaders and feisty, versatile players who remind her of a Seton Hall guard named…Kaity Healy.