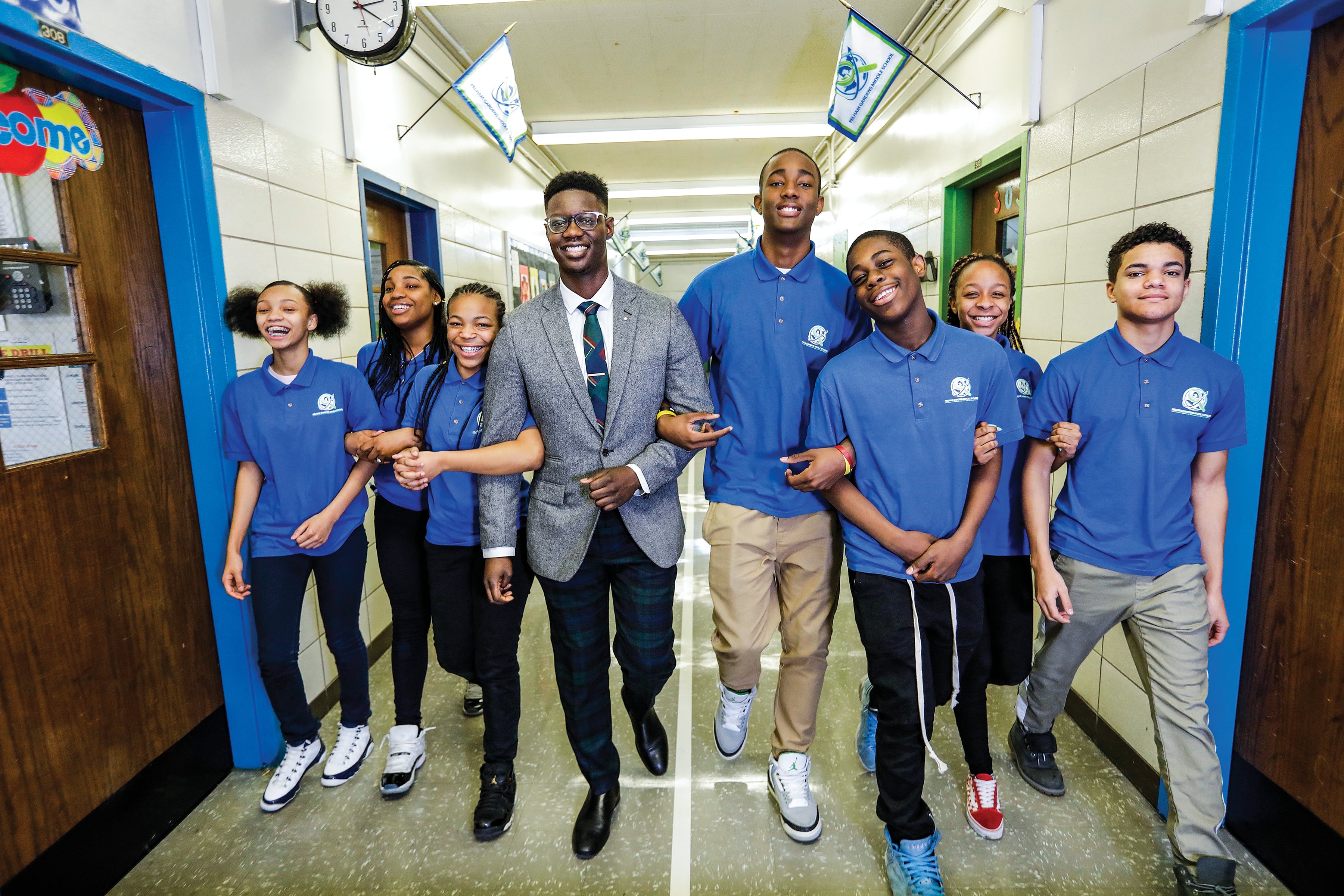 As a kid, Edmund Adjapong didn’t have much use for science class. He didn’t see how the concepts applied to him and his life. Adjapong grew up in the Bronx, the son of immigrants from Ghana. Why should he care about the inner workings of a cell or the chemical reactions happening inside a beaker? None of his teachers made science seem like a viable career option.

But in ninth grade, Adjapong enrolled in a physics class taught by Christopher Emdin, who wrote and performed raps about scientific concepts. He played rap music videos. Back then many rappers wore enormous chains around their necks, and Emdin showed his students how the necklaces swung like pendulums. “These rappers had captured the imaginations of young people,” Emdin says. “So I was going to use them as a mechanism to connect the kids to science.”

The gambit worked. Adjapong did well in the class and began gravitating toward science. “That gave me the motivation to feel like I could really pursue science as a career,” he says. After high school, Adjapong went on to earn a degree in biochemistry. But rather than becoming a scientist, he became a science educator. Today Adjapong is at the forefront of a burgeoning movement aimed at bringing hip-hop into the classroom.

Adjapong, who joined the Department of Educational Studies in 2017, has been a welcome addition to the faculty, says Maureen Gillette, dean of the College of Education and Human Services. “Not only does he come with an incredible science background, he brings a lot of practical real-world experience,” she says.

Hip-hop has been a part of Adjapong’s life for as long as he can remember. He used to go to school early to recite songs with his friends. Some people view hip-hop as simply a genre of music, but for Adjapong it’s the culture of urban youth. “It’s always been a part of my identity,” he says. So when he began teaching in the same neighborhood he grew up in, he used music to help his students engage, just as Emdin had done.

Meanwhile, Adjapong began pursuing a doctoral degree at Columbia University, believing he could use it to become part of the conversation about science pedagogy and “privilege the voice of students of color — students like me who had negative experiences of school.” Emdin, who had become a professor at Columbia, signed on as his adviser.

Adjapong began studying the impact of hip-hop in the science classroom. He used his class as a laboratory, but also began working with students in other schools. In 2013, he and Emdin teamed up with rapper GZA, a founding member of the Wu-Tang Clan, to launch the Science Genius program. Students spend a semester writing raps that demonstrate their understanding of scientific concepts, and then each participating school sends one team to perform their rap in a citywide battle.

Adjapong’s research suggests that the program helps foster engagement, but it also seems to help students retain the material. The students don’t write “fluff,” he says. “They’re able to have a deep understanding through crafting the raps because they’re able to make the connections between the content and their lived experiences.”

Adjapong still works with high-school students as a mentor and as director of the Science Genius program. But now he has a new role: giving teachers the tools they need to succeed in urban schools, whether they come from cities or not. “One of my goals as a faculty member at Seton Hall is to bring more of an urban lens to the program and prepare our teachers to be effective in urban settings.” To that end, he developed a class called “Hip-Hop Through the Context of Urban Education.” He and his students talk about gender, race, class and many of the other issues affecting urban youth.

Although Emdin has been working alongside Adjapong for years, he continues to be amazed by his former student’s transformation. “When you see him in front of the classroom, whether you’re talking about grad students or you’re talking about sixth graders, it’s glowingly apparent that this is a gift and he’s found his calling,” Emdin says. “Edmund Adjapong is a magical human being.”

Cassandra Willyard is a freelance writer based in Madison, Wis.