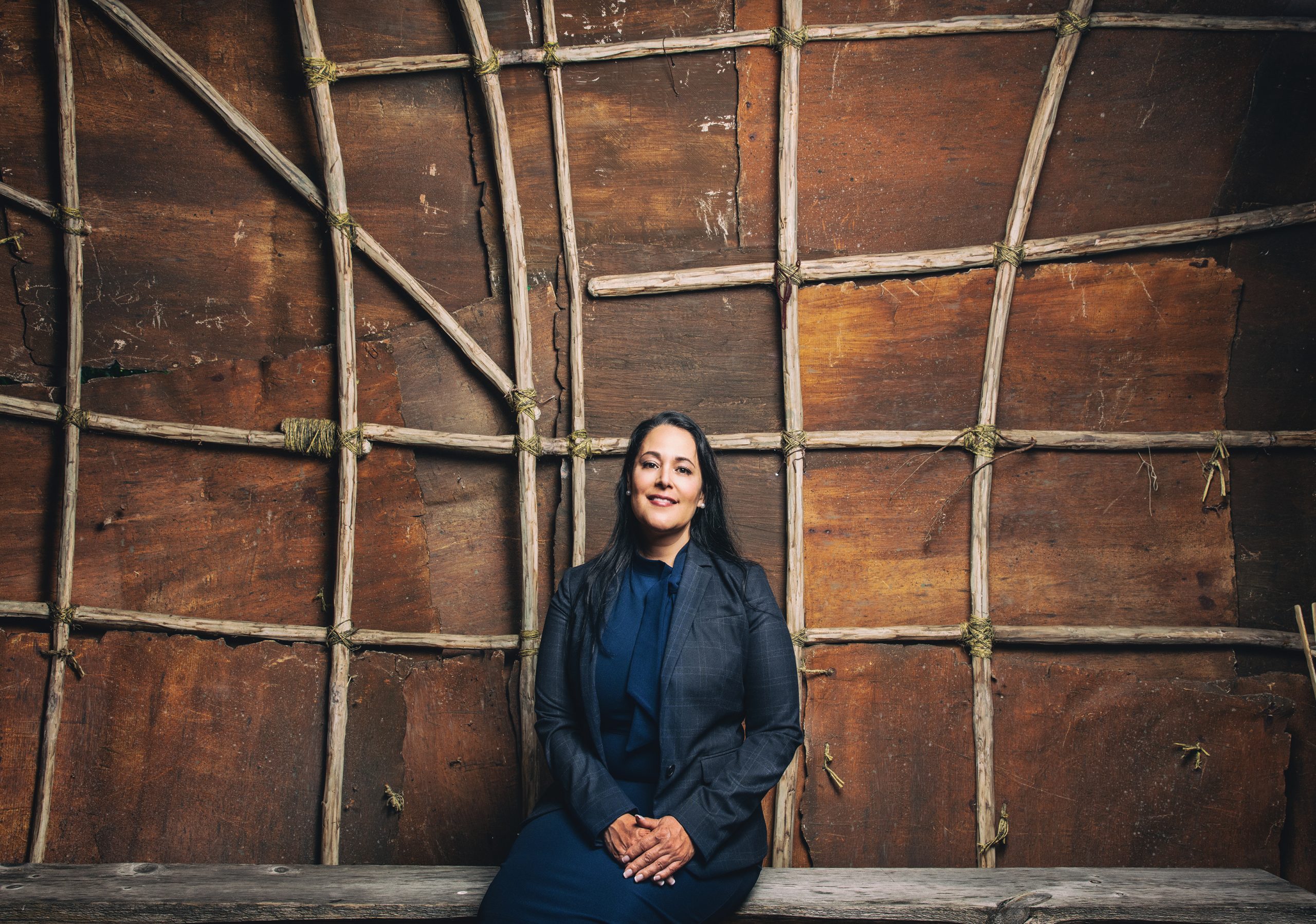 As president of the Stockbridge-Munsee band of Mohican Indians, Shannon Holsey, M.A. ’14 went on camera in January to talk to her people about the COVID-19 pandemic, the recent insurrection at the U.S. Capitol, and the delayed rollout of vaccines on the reservation. Her calm demeanor and steady tone laid out the challenges at hand: in the fall, COVID-19 deaths had spiked among Native people in Wisconsin, tripling in October and dwarfing the growth rate among other racial groups.

“I just want to take a moment to continue to send you well wishes and blessings and all our respects to the relatives who have passed or are fighting the COVID-19 pandemic,” she said. “We are sending you an abundance of good medicine and prayers for your emotional continued balance and we’re holding dear to those memories of those that have passed.”

Holsey’s desire to be a leader for her people had taken her on a journey years earlier to Seton Hall, where she pursued a degree in strategic communication. She is now putting those skills to work to tackle the next generation of challenges for Native American people, including managing a tribal government and entities with a workforce of over 1,000 and an annual budget of more than $150 million. 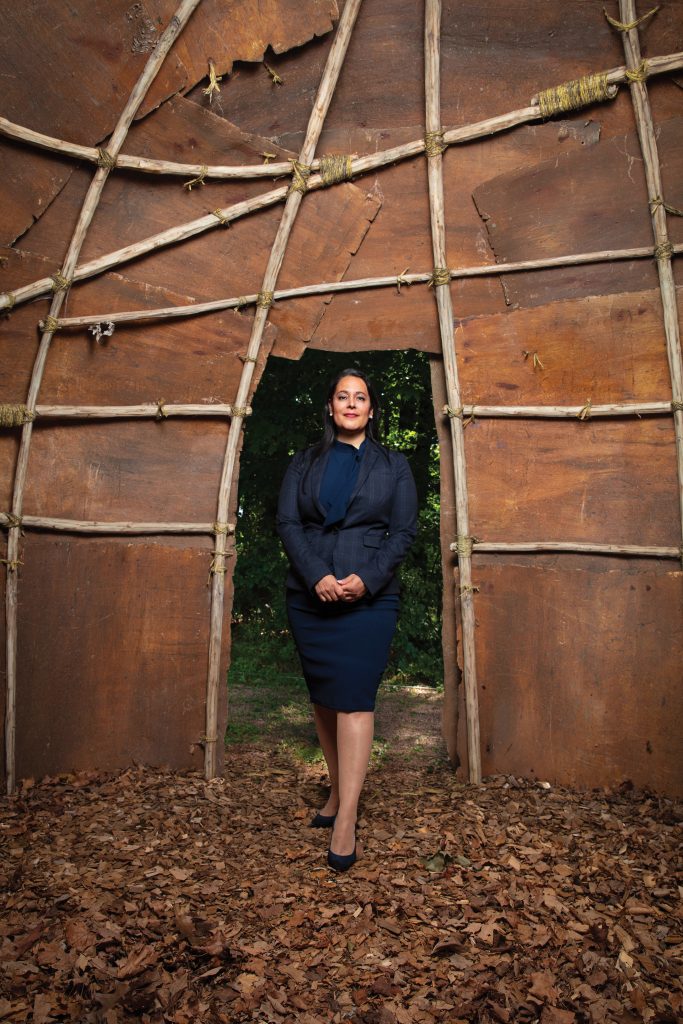 Holsey grew up on the Stockbridge-Munsee reservation in Bowler, Wisconsin. The tribe originated in upstate New York and was forced to move several times starting in the 1800s, forced to uproot again and again. Its people traveled through Massachusetts and New Jersey and across the Ohio Valley. When the group arrived in Wisconsin, they numbered only about 500 people, Holsey says, and now the population is 1,700.

Holsey had a deep sense of her group’s history and a desire to correct false information of the past. “There’s a misconception about who we are as Mohicans,” she says. “People read about us in history books, but don’t realize we still exist. There’s no such thing as the ‘last of the Mohicans,’ because I am she.”

The tribe has a history of leadership and activism. In the early 1800s, a formally educated Mohican diplomat named John Quinney drafted a constitution for the tribe and negotiated with Congress to gain citizenship for its members.

Holsey’s childhood hero was Ada Deer, an educated, outspoken, and fierce advocate for Native American and human rights who helped her tribe (Menominee) regain federal recognition after it had been terminated. Deer was appointed assistant secretary of the Interior by President Bill Clinton and served as the first woman to head the Bureau of Indian Affairs.

Holsey also found inspiration from her mother, who was in the workforce holding nontraditional management positions during a time when many women did not have those kinds of jobs.

“She led by example and was a person who utilized her personal strengths and knew the benefit of relationship building, by collaborating with others to take advantage of opportunities,” says Holsey. “My parents continue to shape and inspire me every day. My pathway was forged by their sense of duty — that came from being responsible and knowing what needed to be done, and getting things done, along with their passionate commitment to improving the lives of people.” 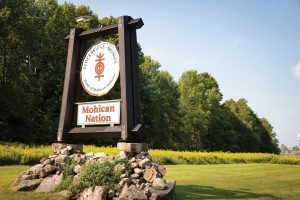 Holsey attended Colorado Technical University and studied business administration, and then returned to Wisconsin to work with her tribe. “In my culture women have traditionally and historically always played a role in shaping the way our community was organized and managed. Prior to European contact, Native women held positions of leadership, shared in decision making and owned property,” she says.

Holsey served on the board of directors of her tribe and worked as the hospitality director, managing about 150 employees. One of her biggest responsibilities was communicating across diverse populations. “It was getting to the point where I needed to step up or step out,” she says. She was drawn to Seton Hall “because it was a Catholic school, had core tenets and aligned culturally with how I was going to proceed.”

“As a Seton Hall alumna, I recognize that my strong cultural identity was central to my educational aspirations and success. My identity is the connectedness that I have to my tribal community, and the connections and teachings of my ancestors and the world at large.

But having a leadership background and training doesn’t mean her journey has been without barriers. “As a Native woman I often find myself living in two worlds and must navigate expectations and responsibilities by switching between mainstream American and tribal values,” Holsey says.

She found her spiritual, cultural, educational and professional pathway — and a way to use her platform for the underrepresented — while at Seton Hall in the Master of Arts in Strategic Communication and Leadership (MASCL) program “through the help of amazing [program] cohorts and faculty. As [fellow MASCL student] Sister Alice Kizita Otoo, M.A. ’14 so truthfully proclaimed ‘I didn’t go through the Seton Hall MASCL program, it went through me,’” says Holsey. “As a Seton Hall alumna, I recognize that my strong cultural identity was central to my educational aspirations and success. My identity is the connectedness that I have to my tribal community, and the connections and teachings of my ancestors and the world at large.”

Holsey was also shaped by working with diverse groups from all over the world, understanding that people can be diverse in thought while sharing common themes.

Katherine Kawamoto, M.A. ’14, who completed the MASCL program with Holsey, vividly remembers when they met. Holsey and Kawamoto were in the same small group and did group projects together. Their first assignment was to give a three-minute speech, introducing themselves.

“She did a tremendous three minutes, bringing in her Native American culture, tapping on the table as she spoke, as if it were a drum,” says Kawamoto. “I knew right from the get-go that she was going to be one to watch.”

Holsey remembers arriving at Seton Hall and being asked what she hoped to get out of the program. She answered that her goal was to be tribal president.

The program asked students to listen to speeches, write speeches and critique each other — and it was rigorous, Kawamoto recalls. At one point, the small group she and Holsey were a part of worked for hours on developing a strategic plan for starting a business that no one had conceived of before. The group developed an idea to combine veterans and dogs in a companion program — something they thought was completely novel. In the middle of their presentation, the professor did an internet search, and found that their business concept already existed. Still, the group forged onward. “Shannon was a cheerleader,” Kawamoto remembers. “She was always up for the challenge and she wanted to make the projects fun.”

In 2015, Holsey fulfilled her goal and became the fourth woman to serve as president of the Mohican Nation and is now the longest serving. Native women leaders and executives like her are reclaiming their decision-making authority today, she says. 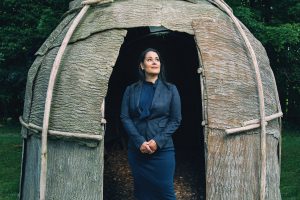 As the leader of a sovereign nation, Holsey is tasked with the wellbeing of her constituents — from healthcare to education to employment and justice. Much of her time is taken up with the day-to-day governance, but she has larger ideas in mind as well. The COVID-19 pandemic put long-standing health disparities front and center, she says. And the death of George Floyd crystallized racial equity as a critical issue.

Native communities were hit hard by the pandemic and suffered losses as businesses were shut down and revenues shrank to about 30 percent of normal. But the tribe also proved resilient, Holsey told a Wisconsin radio station, noting that it used the past year to redevelop tourism and redefine how to manage it as a sustainable business in the future.

Holsey appeared this summer in Washington, D.C., to talk about the need for rural broadband internet access, introducing Vice President Kamala Harris onstage at an event. She connected the links between infrastructure, health and equality: “There are over 570 federally recognized tribal nations within the United States that are rich in geographic, political and cultural diversity,” she said. “Unfortunately for decades, the federal government has recognized that Indian country has had substandard infrastructure in every sector.”

She told the group that 70 percent of American Indians and Alaskan Natives are homeless or live in homes needing repair, with 48 percent of households lacking access to clean water, and 40 percent lacking high-speed internet. “This existing crisis has created disparities that have led American Indian and Alaskan Native communities to have the highest per capita of COVID-19 infection, hospitalization and the death rate in the United States.”

Connectivity of all kinds is key, she added. The Stockbridge-Munsee nation collaborated with the local telephone company to install 20 miles of fiber optics to help begin to stabilize the tribal nation.

Back in Wisconsin, Holsey says that women are challenging the status quo in many ways, but despite a commitment to equity, women and people of diverse backgrounds are still vastly underrepresented in many areas. “Our racial, social, gender and economic disparities — that won’t disappear anytime soon. It should go without saying, people of color and women are not a monolith. It’s time for boldness. Collaboration. A big, audacious vision. We have real challenges, and we’ve been saying for years we have what it takes to meet those challenges. Time to prove it, unified in purpose.”

Holsey sees herself as an extension of her tribal nation socially, emotionally, historically, and politically. For her, cultural identity is based on tribal membership, extended family and community: The tribe is an interdependent system of people who perceive themselves as parts of the greater whole rather than a whole consisting of individual parts.

“We still have much work to do, but I remain hopeful that a new generation of diverse, forward-thinking humans will build upon and embrace equality, inclusion and opportunity for all.”

Katharine Gammon is a freelance writer based in Santa Monica.