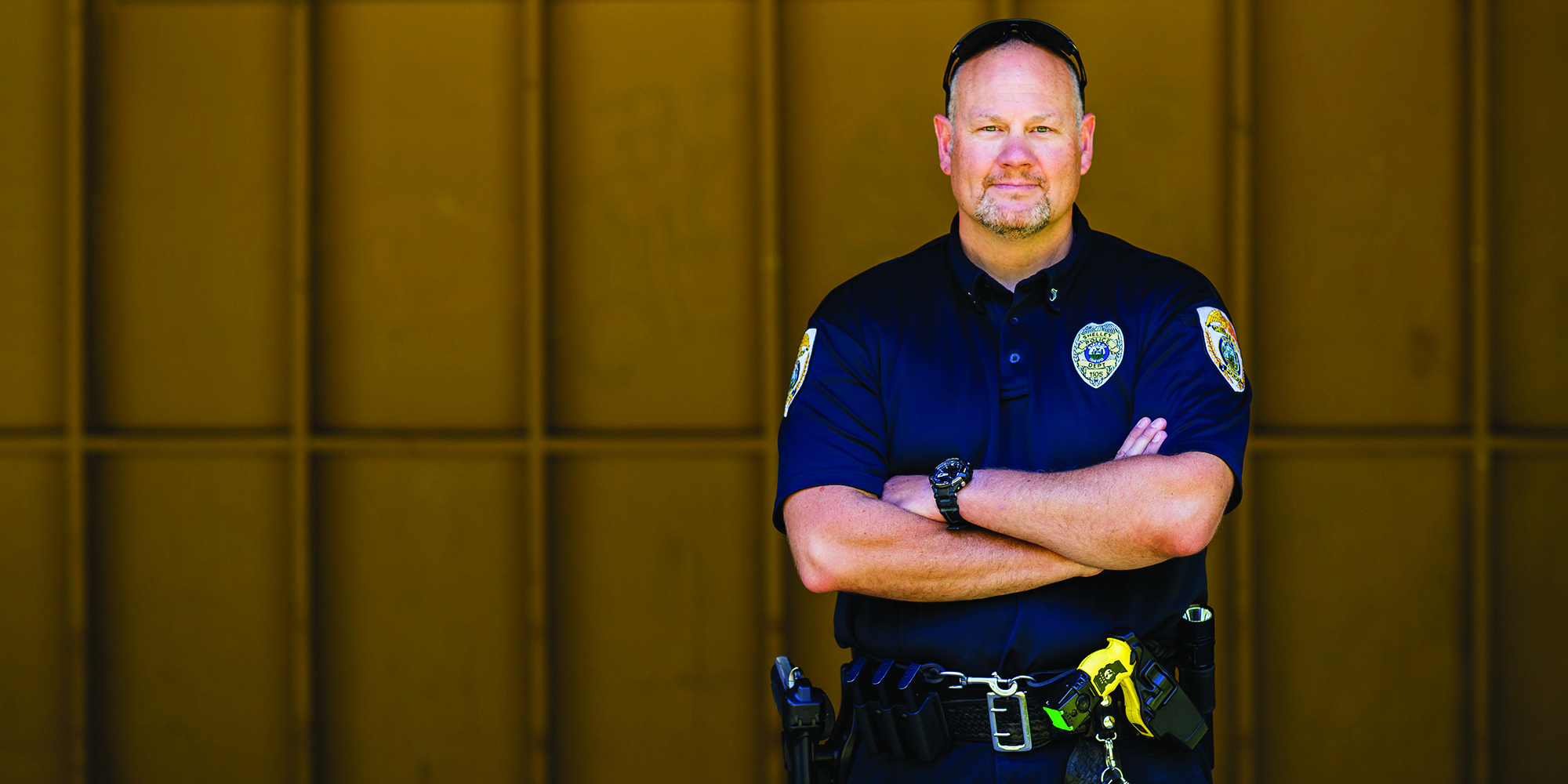 “He was my cover when I was deploying my dog,” says Swanson, a K-9 handler and crisis responder. “He was one of the strongest men I ever knew, emotionally, physically and every other way. He was the one you wanted at your side when going through the door.”

The incident triggered Swanson to focus his counseling studies on developing an advocacy program to help prevent such tragedies in Idaho, where “there is no organized effort to recognize or deal with the trauma police officers face.” Nor are there police unions to push for psychological interventions, he says. The means of his advocacy? Spreading the word about mental-health resources that are already available to officers but are not often used.

Swanson has been sharing critical information at statewide Fraternal Order of Police (FOP) meetings and other venues. Reporting some success, he has made presentations about the warning signs of suicide to the Idaho Chiefs of Police Association and the Idaho Sheriffs’ Association during their regular gatherings.

In a culture that prizes strength, obedience, no complaining and “where there is a great fear of appearing weak,” stresses often add up in silence. The hopelessness and despair encountered on the job can be hard to deal with, Swanson says, noting that some officers respond by drinking — which can lead to absenteeism and increased pressure to perform from superiors.

The profile of the typical suicide among police officers is a male who has served from 15 to 19 years and is between 40 and 44 years old, according to statistics from the Badge of Life police mental-health organization, which promotes the emotional well-being of officers in the United States and Canada. The number of police suicides totaled 126 in 2012 (the latest year data was tabulated by the organization).

This figure represents “a substantial threat that is
not being addressed,” says Swanson. There is no mandatory counseling in Idaho and police officers find it
difficult to accept help, Swanson says. It therefore falls to
upper-echelon officers to understand and spot the symptoms in advance of tragedy, he says. So Swanson sees his work as educating chiefs, lieutenants and sergeants across Idaho’s cities and many small-town departments about the issues in what he calls “a grass-roots effort.”

Swanson says that some of the warning signs of pre-suicidal behavior among police can include:

Nationwide, police suicides have declined from 143 in 2009, according to Badge of Life findings, and the organization speculates that this may be because of the kinds of education and support efforts Swanson is promoting.

“This is encouraging news,” the Badge of Life website notes, “that we tentatively attribute to the increased number of departments adopting peer-support programs and the increased willingness of officers, many of them younger, to seek professional assistance — not only when they have a problem, but before problems develop through things like ‘mental-health checks’
done annually.”

Swanson, who chose Seton Hall because he “was drawn to the values, ethics and philosophy of the university,” plans to open a private counseling practice that specializes in police and military clients when he graduates. In the interim he has already helped fellow officers to understand that assistance is available to them. His department held a mandatory counseling session where officers received training and information, and participants were able to schedule a confidential meeting afterward with a professional counselor. Several did.

Capt. Darren Cook, the Idaho Falls department leader who helped Sgt. Swanson roll out the program locally, says he was initially skeptical of the “framework of a department-wide adjustment to how we address officer stress and identifying those officers who may need some help.” But after training in recognizing and helping such officers, the department has “made some progress in both morale and officer retention.”

Kyle Christopherson, president of the Idaho Falls FOP lodge, notes that the process of changing attitudes is slow. “We had requested to be put on the main agenda for the state meeting next month but the best we were offered was a breakout session.” Yet, “we have made major changes in all the agencies that are part of our local lodge and are using social media to reach out to others and team up with groups like the Code9Project (a New York-based support organization for first responders).”