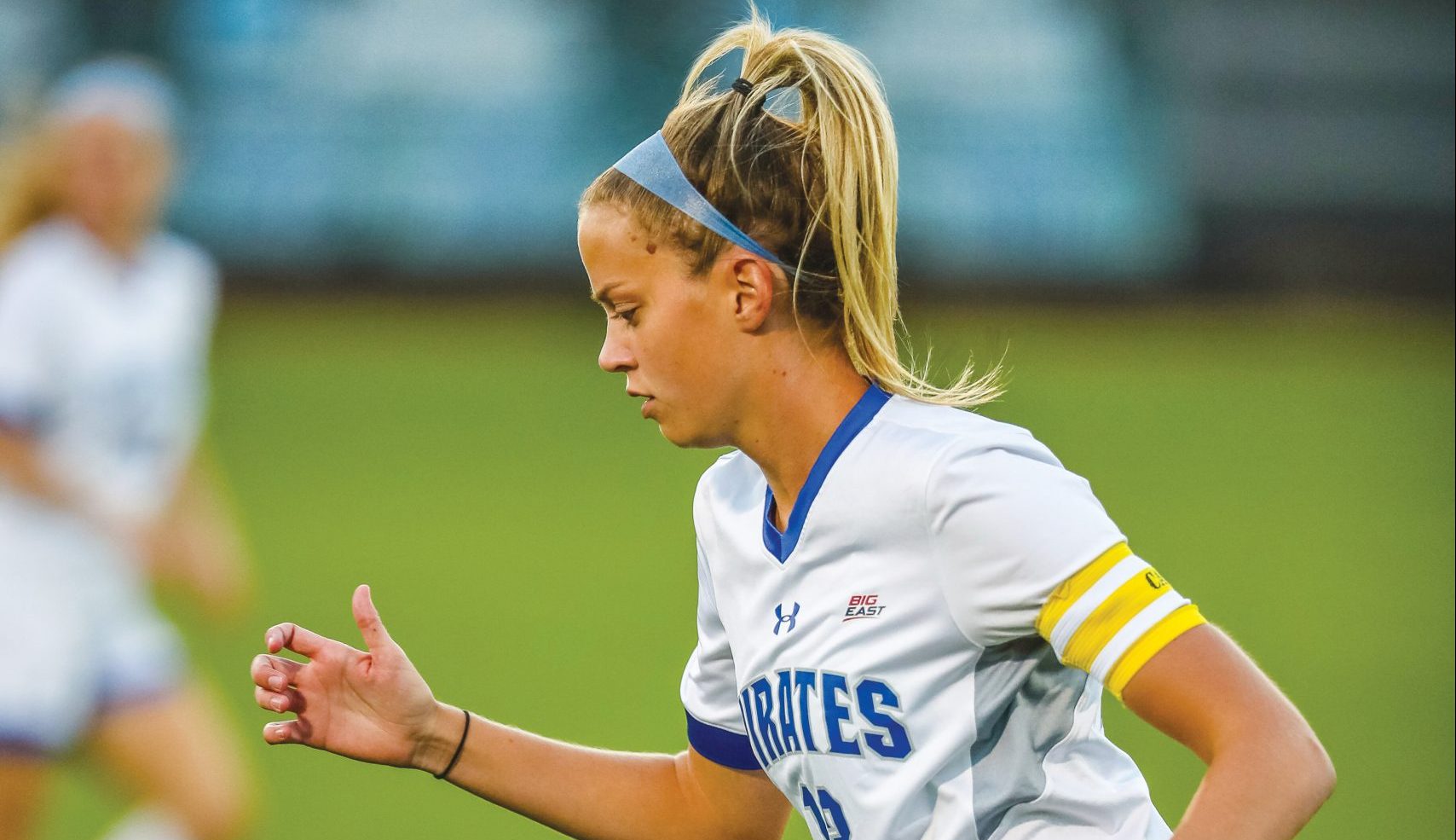 Don’t get the wrong idea. Taylor Cutcliff ’19 wouldn’t want to relive the worst months of her life, when doctors told her she would spend the rest of her life in a wheelchair. But Cutcliff, a standout defender during her four years on the Seton Hall women’s soccer team, admits that those frightening days back in Springfield, Pennsylvania, paved the way for her involvement in community service and started her on a journey filled with classroom accolades, on-field accomplishments and a devotion to helping others.

“In a way, it made me into the person I am today,” says Cutcliff, a mathematical finance major and branch analyst at Morgan Stanley.

“It” happened in junior high, when Cutcliff broke a bone in her ankle. This relatively straightforward injury became dangerous when doctors removed the cast and discovered she suffered from reflex sympathetic dystrophy (RSD) — her brain believed she was still injured so kept pumping blood to the area. She endured four surgeries, but they didn’t help. Doctors told her she was destined for a wheelchair, difficult news for an eighth-grader who loved running free on the soccer field.

During this downtime, she socialized more and participated in community activities such as picking up trash on weekends. She discovered that she loved being involved, and loved helping. Then doctors found a cyst, which they removed, and the pain and the condition disappeared.

Cutcliff returned to star on the soccer field. But now she was also an extraordinary student and champion volunteer. That’s the all-around package that arrived at Seton Hall, where she juggled Division I athletics with dozens of activities.

“Over my entire career there have been about five students that I will never be able to replace,” says Brandon Larmore ’08, the director of the Academic Resource Center who worked with Cutcliff during her time as a tutor and as a Habitat for Humanity volunteer. “And she’s on that list. She’s incredibly smart, very personable, very warm, welcoming, friendly, energetic. Everything you want in someone who’s bound to help others.”

“Over my entire career there have been about five students

that I will never be able to replace,” says Brandon Larmore ’08,

the director of the Academic Resource Center.

Cutcliff’s accomplishments read like those accumulated over a decade instead of four years: BIG EAST Freshman Scholar Athlete; PirateThon co-chair; part of the top-ranked Leadership Certificate Program; Collegiate Challenge chair for Habitat for Humanity. She also served as soccer captain.

As a peer tutor, she helped students with math, some business classes, and accounting and biology. She says, “It meant so much when you’re working with a student for maybe two weeks and they come back and they’re like, ‘I got a B,’ or, ‘I got an A on my test.’”

Larmore marveled at Cutcliff’s willingness to tackle new adventures, including Habitat for Humanity trips where students help with building homes, painting or even demolition.

In Delray Beach, Fla., a woman told students how she’d been trying to paint her house for seven years, saying, “I have a daughter and she wants to be proud of her house. You guys are like angels from heaven.” Cutcliff remembers, “I was like, this is why I did this all semester, for moments like these where I don’t realize how much I actually have and how much I should actually be grateful for. It really motivated me to give all I could to Habitat. It’s definitely going to be something that I keep doing, well after Seton Hall.”