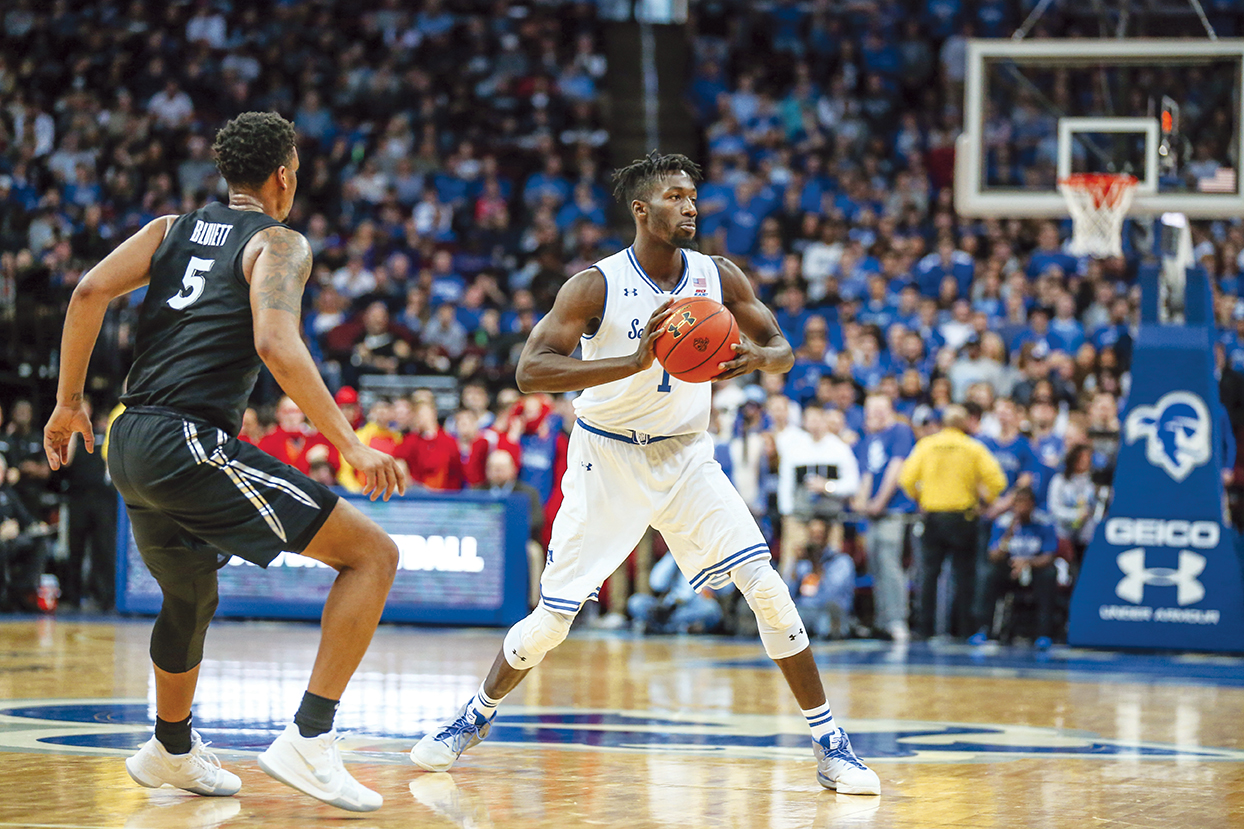 Michael Nzei grew up in Nigeria, moving to the United States in 2012, just three years after starting to play basketball. In less than a decade, Nzei has transformed himself from a soccer-playing kid to a standout contributor in the Seton Hall men’s basketball program on a strong BIG EAST team.

An academic redshirt when he arrived at Seton Hall, Nzei took some time to adjust to college life after attending Our Savior New American High School in New York. But over time, he has turned himself into a standout student-athlete and, perhaps more impressively, into a face of the school.

As part of the Seton Hall Blue Crew, Nzei leads tours for prospective students. Roberto Sasso, associate athletics director for student-athlete development and leadership, works near the coaches’ offices, and says when they bring recruits and parents to campus, “You kind of hope that Mike walks by on those visits so you can stop him and say [to the recruits], ‘Hey, this is a guy that I want you to be like by the time you’re a senior.’He’s such a great ambassador for the University that you want to introduce him. Because you know if these student-athletes can turn out like Mike, not only will you have great people, the teams are going to win, too; that’s the type of guy you want on your team.”

For the Pirates, the 6-foot-8 Nzei brings energy and rebounding skills to the court and a willingness, he says, “to fit in where I’m needed and where I can help the team. I’m just a gamer.” That doesn’t always involve scoring a lot of points, but when Nzei does shoot he makes it count, converting roughly 60 percent of his shots from the floor.

It’s an impressive career for a player who spent his childhood kicking a ball, not shooting it. “It’s a different ballgame,” Nzei says of adjusting to the sport, “but everything carries over — strength, agility, change of balance, the footwork.”

An economics major, Nzei is consistently on the Dean’s List, has been a member of the BIG EAST All-Academic team, and was named to the National Association of Basketball Coaches Honors Court. He also serves on the student-athlete advisory committee, which discusses student-athlete welfare and NCAA legislation while promoting school spirit and community involvement.

He also tutors other students. “Everything he gets involved with he takes seriously,” Sasso says. “He doesn’t take anything for granted and he appreciates everything.”

This summer, Nzei will spend three months as an intern with the financial-services company Cantor Fitzgerald, where he’ll learn everything from market analysis to sales to trades. Nzei thought he did well during a two-hour interview with the Cantor people, but didn’t expect to hear about the position for a week. Instead they were on the phone later that day telling him they wanted him.

Nzei misses Nigeria, where his family still lives, but he focuses on his life now and what’s ahead. He works with a host family who serve as missionaries, talking with kids in poverty, teaching them about basketball, and telling them about his life story.

He says he may someday return to Nigeria to help his homeland with what he’s learned at Seton Hall and in the States. “If I said I didn’t miss it, that would be a lie,” Nzei says. “But if you keep looking back, it’s going to hold you back.”