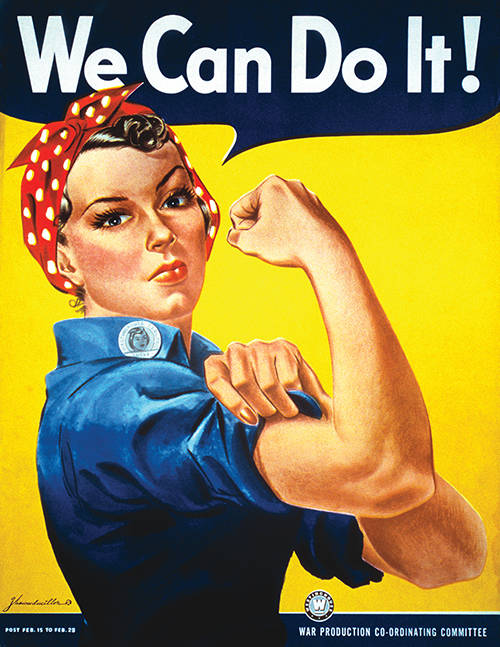 Will the Real Rosie the Riveter Stand Up?

The “We Can Do It” poster from World War II is one of the country’s most iconic images. For years, it was believed that the illustration of a woman in a polka dot bandana, rolling up her sleeves to work in a defense plant, was based on a photograph of Geraldine Hoff Doyle, who recognized her likeness. Media accounts repeated the idea that Doyle was the inspiration for the poster, and over time, that association solidified. But when Doyle died in 2010 and media outlets identified her this way, James J. Kimble, associate professor in the College of Communication and the Arts, decided to investigate. When he unearthed an original copy of the photograph thought to be the basis for the poster, Naomi Parker was identified on the back, not Doyle. Naomi Parker Fraley passed away in January 2018.Seton Hall magazine editor Pegeen Hopkins spoke with Kimble to learn more about his scholarly investigation.

You found the photograph in a dealer’s shop?

I did. I came across a photo in Time magazine from 1942 that looked eerily similar to the one Geraldine Hoff Doyle thought she saw herself in. It looked like the same woman, just in a different pose. I spent about a week here on campus taking both photos around and showing people: “Is this the same woman? Is this the same woman?” Everyone agreed that it was. I did a reverse image search of the Time magazine image on Google. I had done this with the other photo numerous times, and that search had just taken me to all the websites that say the image was of Geraldine Hoff Doyle. But this photo was unknown to me; the search took me to a dealer in Memphis. I got in touch with the organization and they said they had both photos of the woman. The captions were glued to the back.

What draws you to these kinds of investigations?

They are an outgrowth of my scholarly work. I’m a historian of propaganda, and I believe that if history is going to be valuable at all, we have to take care of it. If I can look at an image and say, “Oh, that’s me,” and everyone starts believing me just because I said so, and if it gets repeated enough times that it becomes treated as fact, that’s not real history. Once I realized that the woman in the photograph, Naomi Parker, was still alive, I realized there was urgency, because by that time, she had realized that somebody else’s name was attached to her image. And try as she might, she couldn’t fix the record.

What was your main takeaway from this investigation?

Just how amazing the power of belief is. We often say, “seeing is believing,” but it’s really the reverse: “believing is seeing.” When we believe something, that influences how we see. If I look at that poster and I believe it’s Geraldine Hoff Doyle in it, I’m going to see evidence that supports that belief. And, if I don’t believe it’s Naomi Parker, and she presents me with some evidence, I’m not going to see her evidence because I’m believing something else first.

What are your thoughts about counteracting inaccurate narratives that can grow so quickly?

It’s only likely to get worse. We need more people who are willing to be cynical. This is something I talk about with my students. I teach a seminar, Propaganda, Religion and War, and when my students come up at the end of the semester and say, “I feel more cynical after taking this course,” I’m delighted. Because to me that means they’re much less likely to take messages at face value. And they’re much more likely to question when someone says, “Oh, I’ve seen this 27 different places. It must be true!” I want my students to say, “How do you know that?” That’s the only real force we have to maintain accuracy in the face of social media and the speed that information, or fake information, flows. It’s just harder and harder to fight that fight.