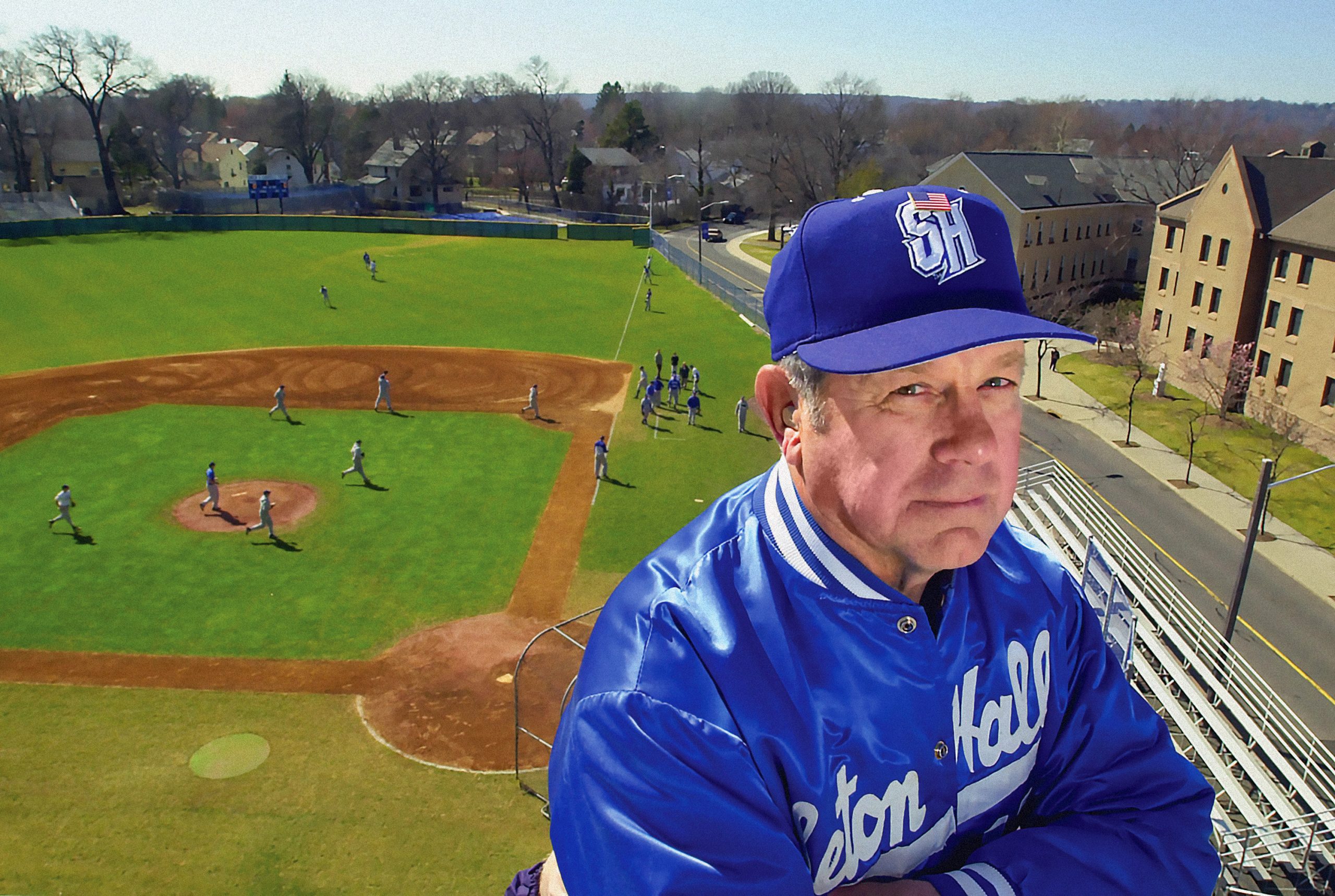 Just a few weeks before he died, former Seton Hall baseball coach Mike Sheppard Sr. ’58 spent the day doing what he’d done throughout his life: watching baseball with his family. His son Rob Sheppard ’92, the current Pirates coach, drove him to watch the scrimmage between Seton Hall Prep, coached by Mike Sheppard Jr. ’81s, and Morristown-Beard School, coached by John Sheppard ’87. They sat in the car, parked behind the left-field fence.

“And so the last baseball game he was at,” Mike Jr. says, “he was sitting with one of his sons who brought him and watched his other sons’ teams play against each other. Pretty fitting.”

Baseball and family were defining aspects of Sheppard’s life, which ended April 6 when he was 82. “Family came first,” Mike Jr. says about the Sheppard clan that includes his mother, Phyllis, him and his two brothers, and sisters Susan ’82 and Kathleen ’83.

“He was a man of great faith. He was a Marine, a tough guy.
Because he had a rough exterior, people thought he’s not a
very emotional guy, but that’s far from who he is when you’re
a family member or a friend. He’d do anything for you.”

At his father’s wake, pictures showing a lighter side of the imposing figure surprised mourners. “People
saw the photos,” Rob says, “and they’re like, ‘Oh, my God. That’s Shep dressed as a clown [on Halloween.] That’s Shep dressed as Santa Claus.’ He had a really good sense of humor.” Sheppard Sr. loved the pool, the shore and his boat. “He loved to be out in the water and he loved the beach. He loved life.”

But there’s no question about the importance of baseball, with a career that started in 1973 when he replaced Owen T. Carroll, who had been his coach. Coach Sheppard won 998 games before his 2003 retirement. His teams made the NCAA Tournament 10 times and the College World Series in 1974 and 1975. He earned BIG EAST Coach of the Year honors in 1985, ’87 and ’89. Thirty players became Major Leaguers — guys like longtime Yankee Rick Cerone, former Red Sox star Mo Vaughn and Baseball Hall of Famer Craig Biggio. The ’87 team put together a remarkable 45-10 record.

An early recruit, a Long Island kid named Ed Blankmeyer ’76/M.A.’83, excelled on those College World Series teams. “Hard-nosed guy,” Blankmeyer says. “Demanding, very tough, no nonsense. He wanted players to be team-first kind of guys and didn’t accept anything else.” Blankmeyer became Sheppard’s longtime assistant before carving out his own legacy as the coach at St. John’s. And he joined the family, marrying Sheppard’s daughter Susan. “He was a hell of a grandfather, and as tough of a guy as he was, he was a family guy first.”

Everyone around the coach heard him command, “Never lose your hustle,” a saying he got from his father, who raised him after his mother died when he was young. “My dad had a tough upbringing,” Rob says, “and I think that’s why he related to a lot of different kids. So he always said to “work hard, never lose your hustle,” and it became his mantra.” Mike Jr. recalls, “As a young kid, you hear that — in one ear out the other. Maybe laugh a little. But as you get older, and I know his players do the same thing: in tough situations I find myself saying those words, and it motivates you to pick yourself up and keep going.”

That all three Sheppard sons followed their father’s coaching path wasn’t surprising. When Rob replaced Senior, “My dad was never overbearing. But I would be crazy not to listen to somebody with his experiences. He was a mentor. He was my coach. He was my dad. He was my best friend at times, and I was really fortunate.”

Mike Jr. adds that his dad never wanted to be known as just a coach. He also served as an assistant professor in Seton Hall’s Department of Education. Once Mike asked, “Dad, why don’t you become a full-time baseball coach?” His father replied, “I’m a teacher. I want to make a difference in the regular students’ lives as well as baseball players’ lives.”