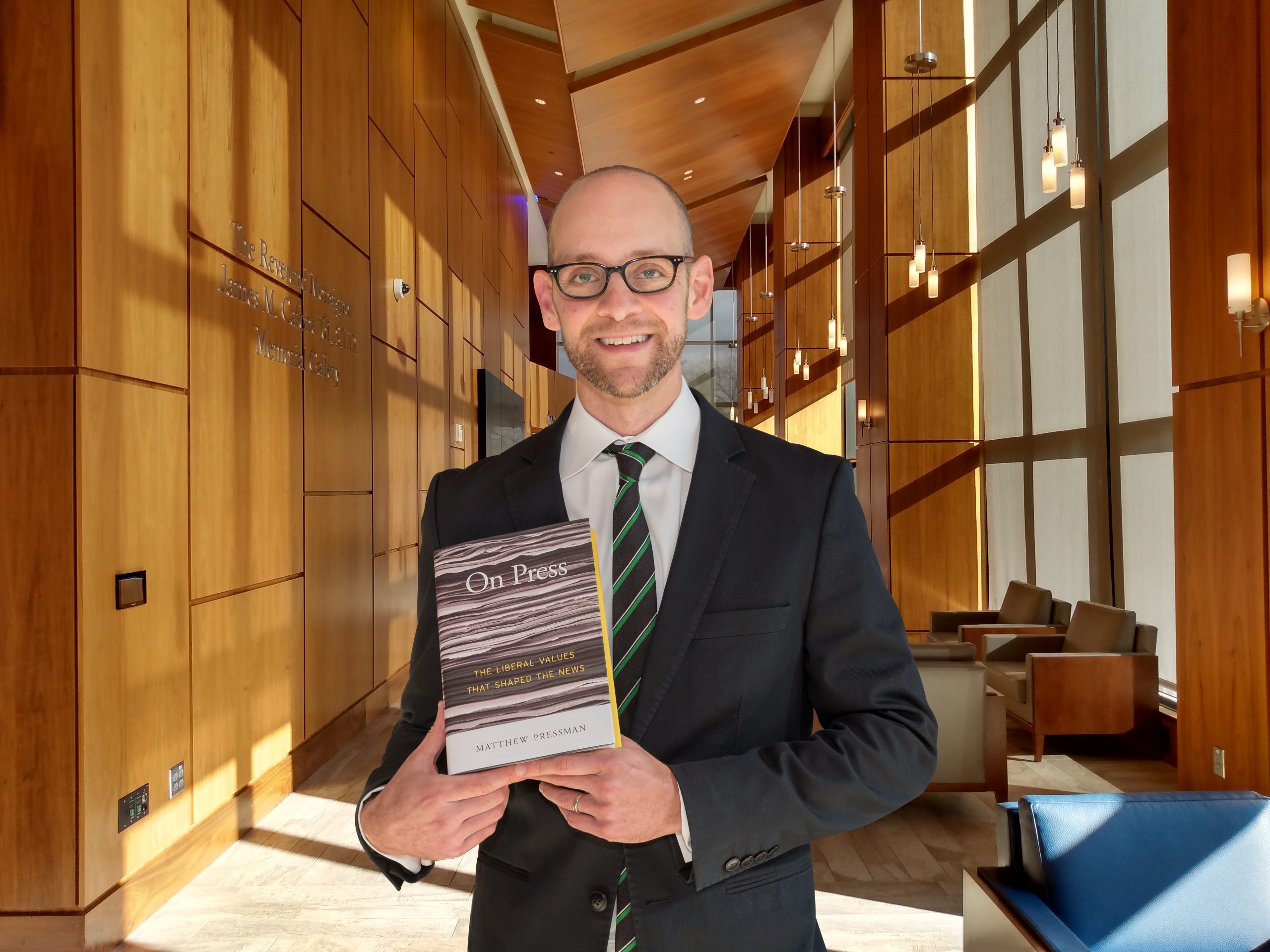 The rise of social media as a news source. Fake news. Accusations of corrosive bias. The U.S. media industry is embroiled in a period of disorienting upheaval, a time when the principles that guide the news are being sharply re-examined. But according to Matthew Pressman, an assistant professor of journalism in the College of Communication and the Arts, this kind of turmoil is not unprecedented. In his new book On Press: The Liberal Values That Shaped the News, he argues that the values shaping American journalism today emerged in the 1960s and ’70s. The history charts how and why significant changes occurred in the news, particularly at two major newspapers: The New York Times and the Los Angeles Times. Seton Hall magazine editor Pegeen Hopkins spoke with Pressman to learn more:

How has the idea of news changed over time?
In the 1960s and ’70s, the news became more analytical and interpretive — reporters started trying to tell their audiences why things were happening rather than simply what happened. The scope of news became a lot broader, too, and I think that’s a positive development. News is no longer considered just what people in powerful positions are doing. It also includes the details about everyday life. This was a big change for major metropolitan daily newspapers especially.

What drove this increase in lifestyle news?
The economic imperative of trying to give readers and advertisers what they want. The ’60s, and especially the early ’70s, were a time of real economic crisis for the news industry, not so different from today. One approach many newspapers took was to create new sections that would devote more space to people’s leisure and personal interests that would be an attractive venue for advertisers also.

One of the drivers of dissatisfaction with the news seems to be bias (perceived or otherwise) in coverage. What are the parallels between the time period you studied and today?
I think we’ve been having the same debate about media bias ever since the late 1960s. Republicans, led by Vice President Spiro Agnew, began saying that the news media has a liberal bias, not just in the editorial pages, but in the news coverage also. That critique was almost unheard of prior to the ’60s and interpretive reporting. In substance I don’t think the debate about bias has changed much in the 50 or so years since. The main change is how heated and violent the critique has become in the past few years.

I also talk about the critique of the news media from the left, which began in the 1960s with a lot of people — journalists included — criticizing the news media for having a bias in favor of the establishment and bending over backwards to avoid seeming too liberal. I think you’ve seen that critique come back stronger today as well, probably stronger than at any time since the 1970s.

What was the most surprising thing to you about your research?
I was definitely surprised at the vehemence of the critique from the left and just how strong that was within many newsrooms. I was also surprised at how quick and dramatic the shift was to a more adversarial approach to news coverage. It happened in just a few years. In the mid-to-late ’60s the approach of reporters to politicians and other people in power changed significantly from this idea of “We’ll give you the benefit of the doubt, and we’re all on the same side here,” to “We’re out to expose you,” essentially. I also thought it was interesting that this shift happened a little bit earlier than I expected. A lot of people associate that shift with Watergate, but I found that it really started several years earlier than that and had more to do with the Vietnam War than it did with Watergate.