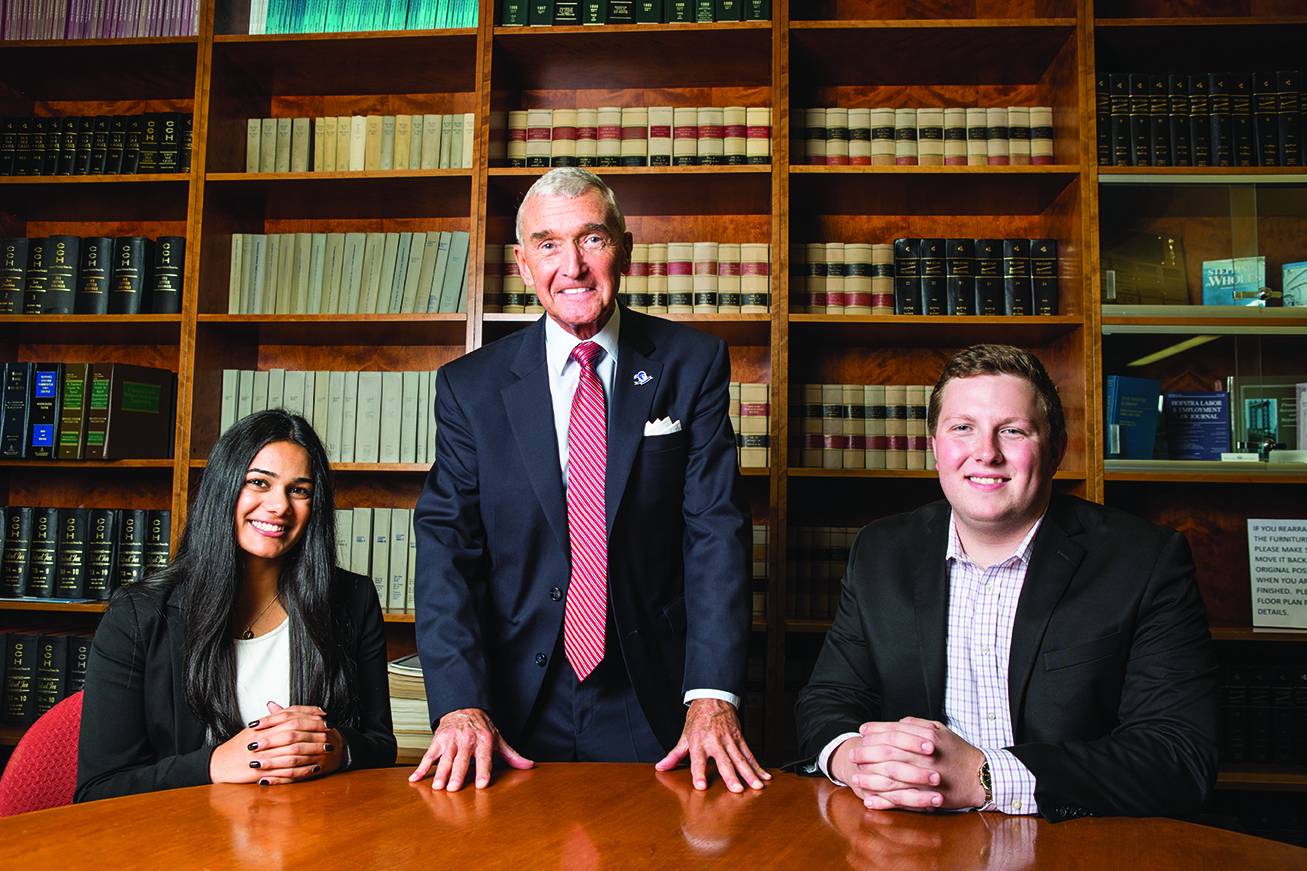 Stillman School of Business leadership students share a special bond with Michael Reuter, director of the Gerald P. Buccino ’63 Center for Leadership Development, and the seniors graduating last spring wanted to show the man they call Mike how much he matters. So each of them, all 15, contributed $100 to make donations totaling $1,500 to the leadership program in Reuter’s name. “He gives us himself for four years. He says ‘I’m here for you 24/7’ and lives up to it,” says Vina Tailor ’17, one of the students who organized the group gift.

“Every year the seniors give him a gift, material things, but we thought this would be something that keeps on giving, something more permanent,” adds Geoffrey Thomulka ’17, another of the core organizers. The students surprised Reuter with an oversized check and heartfelt tributes at the center’s April dinner. “It was one of the greatest honors of my entire life,” says Reuter.

“I was so deeply touched and humbled by their caring to give such a beautiful gift.” John Shannon, a Stillman professor of economics and legal studies, had planted the seed with the students of making a special gift to the program — and they responded. They met to hash out the details, deciding $1,500 was an amount that would aptly reflect their appreciation, Tailor says. The funds directly support the center’s activities.

“This is an opportunity to give to the program that gave so much to us,” says Thomulka. “It’s not about the dollar amount, it’s about all of us participating.”At the dinner, the Class of 2017 leadership students challenged their younger classmates to continue the tradition. “Our hope is next year’s class will say ‘Let’s add to it,’” Tailor says. “Maybe alumni will see our efforts, maybe the council members will see it and say they will follow our lead.”

The Buccino Leadership Development Center offers a four-year honors program with academic and professional development courses that promote confidence, critical thinking and analytical skills. In addition to their regular coursework, the students take noncredit courses in leadership, technology and trends, and team building. The program’s centerpiece is the junior year mentorship initiative that assigns students to work one-on-one with a chief executive on a yearlong project.

Before becoming director of the Buccino Center in 2007, Reuter worked in finance and as an executive coach who assisted senior managers at major corporations. The onetime seminarian says working with students is “everything I wanted in life.”

My job is to serve them, to open up their minds to the gifts that are within them, to build their confidence,” he says. “I see the potential and value in them, and my job is to help them see it and realize it.”

Joyce Strawser, dean of the Stillman School, credits Reuter with raising the national profile of the program with experiential learning and professional development. Earlier this year the Buccino Center was ranked No. 1 by the LEAD Awards from HR.com for the third year in a row.

The Stillman program was honored over hundreds of others for its ambitious standards of academic and professional excellence. “It is focused on principled leadership, and he is the person who brings it all together,” Strawser says.

A collective donation of this size is rare for undergraduates, according to University fundraising professionals. But Strawser says it embodies the values of service and responsibility that Reuter instills every day.
“He’s created a community and has helped students to learn it’s not all about them, that they have an obligation to give back,” she says. “This gift recognizes how much he has done for them.