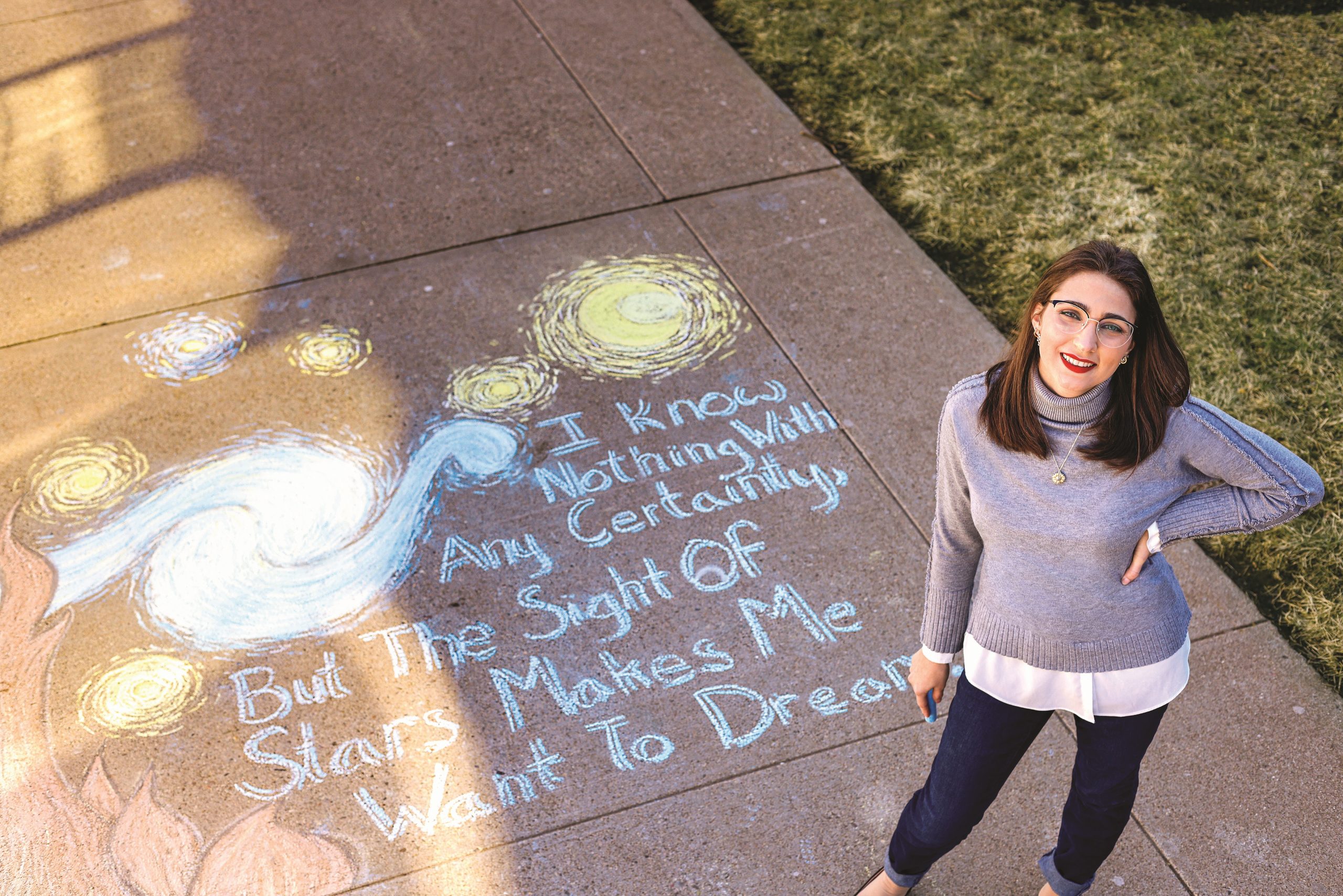 Published April 25, 2022
Olivia Lesbirel spreads joy — and everyday magic — through her chalk paintings that pop up across campus.

In spring 2021, chalk drawings started popping up on sidewalks around Seton Hall. First, the images were of bubbles. Then fish. Then scenes from Pixar movies, like the house-lifting balloons from Up and Remy the rat from Ratatouille, or from artwork like Vincent van Gogh’s Starry Night. For the holidays, the Grinch made an appearance.

Sometimes the art has included inspirational quotes, like “Be who you are and what you feel, because those who mind don’t matter and those who matter don’t mind,” along with a depiction of Dr. Seuss’ the Lorax.

But who was behind these elaborate — if temporary — day brighteners? At first, the drawings were unsigned, then posted on the Instagram account @chalkitup.shu. In November, the artist came forward: physics major Olivia Lesbirel.

“I didn’t quite care if people knew it was me or not. That wasn’t my point,” she said. “My point was I wanted to add a little brightness and fun to campus.”

Lesbirel said she was prompted to start the project because she was bored during the COVID-19 pandemic lockdown, and “there wasn’t much to do on campus.” She’s from Ocala, Florida, so she couldn’t get home easily either.

So she bought a $1 box of chalk from Walgreens that contained 10 pieces of five colors, and got drawing. Her friends suggested she start an Instagram account. She did and added the name of the account as a tag on her work, so anyone passing by could see her previous work that had already been washed away.

Not only has she gotten positive feedback, but she said that “people stop to talk to me and tell me they like to do art, too. I just find that a lot of people get a lot of good out of it, so if I have the time, I will keep doing it as much as I can.”

In one instance, she was in the cafeteria after finishing a chalk drawing, and someone asked her if she was the artist. “I was covered in chalk, so I asked ‘Why, what gave me away?’” she joked. She now works with four large boxes of chalk, but no other tools, to make her elaborate drawings.

Lesbirel said that she grew up drawing and painting, and still considers it a hobby. She learned
more about the possibilities of chalk art by attending events like the EPCOT International Festival of the Arts at Walt Disney World, which includes chalk art installations.

“The illusions they create are amazing,” she said. “I’ve always loved art as a kid growing up, and I love seeing something I’ve dreamed of come to life. What I mean by this is seeing something I love doing and it bringing joy to those around me.”

While chalk art may seem a long way off from the world of physics, where Lesbirel is focusing her academic energies, she said there is a connection, because creativity is a key part of the sciences.

That’s especially true when working in materials sciences and robotics. Lesbirel is experienced in working with 3D printers and began learning robotics in elementary school. Before coming to college, she also participated in robotics competitions, like FIRST Robotics, where teams of students from different schools were all tasked to solve the same challenge. Her favorite was the 2019 challenge called Deep Space, where teams played a game placing polycarbonate hatch panels and orange rubber balls on rockets and cargo pods.

“You have to get really creative to solve some of these problems, especially if you have limited
materials,” she said. “I came from a team that didn’t have a lot of funding, so we scrapped old projects to make new ones.”

So far, her favorite drawing has been van Gogh’s Starry Night, and she plans to continue doing chalk art until she graduates. “I think the world could use a little more happiness. I never know what’s going on in someone’s life, or the day that they’ve had,” she said. “What I do know that for at least a few people, I have made their day a little bit better than it was, that means a great amount to me and hopefully something to them.”