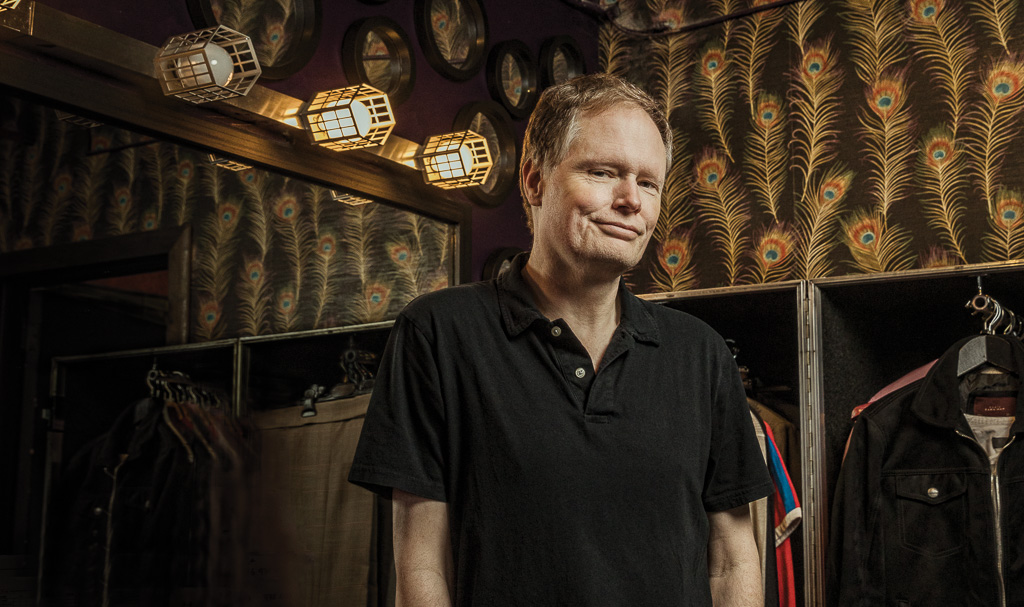 When Steve Ferguson ’85 was an undergraduate communications major and a disc jockey at WSOU, he was dismayed to learn that radio DJs don’t always get to play whatever they want — which, in his case, was mostly new wave and punk rock, although he did start every shift with The Beatles.

So instead of interning with a radio station as many of his classmates were doing, Ferguson sought an internship with Frontier Booking International (also known as FBI), a talent agency run by the late Ian Copeland, brother of Stewart Copeland, then the drummer for The Police, which happened to be one of Ferguson’s favorite bands. Arriving for his interview in the same three-piece pinstripe suit he had worn to his high-school prom — “I looked like the biggest dork,” he says — Ferguson was gobsmacked to see a 10-foot-tall poster of The Police and a young employee sitting at reception who turned out to be Courteney Cox (who went on to star in “Friends”).

He vowed to nail the internship. But first he had to get approval from a professor back on campus. “I go back to my professor and start telling him I have this internship possibility at a booking agency,” Ferguson recalls. “He said, ‘What does this have to do with communications?’ I say, “Radio is involved, and MTV is exploding.” So the professor took FBI’s list of clients home to his 14-year-old daughter, who was a huge fan of The Go-Gos, the infectious girl band that was a Frontier client.

With the rock ’n’ roll fates thus aligned, Ferguson got the gig. Three decades later, he gives credit where credit is due: “I owe the entry of my music business career,” he says, “to my professor’s 14-year-old daughter.” Ferguson’s internship led to a full-time job, and to a crucial period of apprenticeship as a music agent under Ian Copeland, the larger-than-life figure who founded FBI in 1978. In his long career, Ferguson has booked live performances in cramped nightclubs and large arenas for the likes of Morrissey, Blur, Warren Zevon and Iron Maiden. He’s even booked concerts for some of his musical idols, among them Robert Plant, Jimmy Page, Bryan Ferry and Sting.

“When you get that opportunity to work with one of your heroes,” Ferguson says, “it’s like, Wow!” It’s been a heady ride, and Ferguson’s gusto for his work shows no sign of waning. “There’s lots of money involved, and careers are at stake,” he says. “But I like to have fun. We’re not curing cancer here. We’re booking rock ’n’ roll concerts.” These days, as a vice president with the talent agency APA, Ferguson’s client list includes Squeeze, Paul Weller, Saint Etienne, Modern English and Martha Wainwright.

From his office in midtown Manhattan, he is forever in search of new talent, following tips from industry insiders and frequenting nightclubs across the city. “I represent live talent, so you have to see what they’re like as a live band,” Ferguson says. “A lot of A&R people, they’re searching YouTube, SoundCloud and Spotify to see how many streams they have, how many friends they have. I don’t do that, because I try to rely more on my instinct and my gut.”

More than anything, Ferguson says, he looks for “a connection” between musician and audience. One night 10 years ago, Ferguson found himself inside the Knitting Factory, where the singer-songwriter Ingrid Michaelson was performing in a basement space with maybe 125 seats. One of her songs, “Keep Breathing,” had been featured on the television show “Grey’s Anatomy” just a week before, yet everyone in the room that night seemed to know every word.

In the audience, Ferguson was thinking: Wow, there’s a connection there. He’s been booking Michaelson’s live performances ever since. “Steve was my first and only booking agent,” Michaelson writes in an email. “He has become like my family over the years. My family who fights very hard for me!” On this day, after he leaves his office, Ferguson will head uptown to the Beacon Theatre, where Blondie, an APA client, is headlining a sold-out concert. For Ferguson, it’s a perk that never gets old. “I don’t take it for granted,” he says, “that I’m in a wonderful position.”