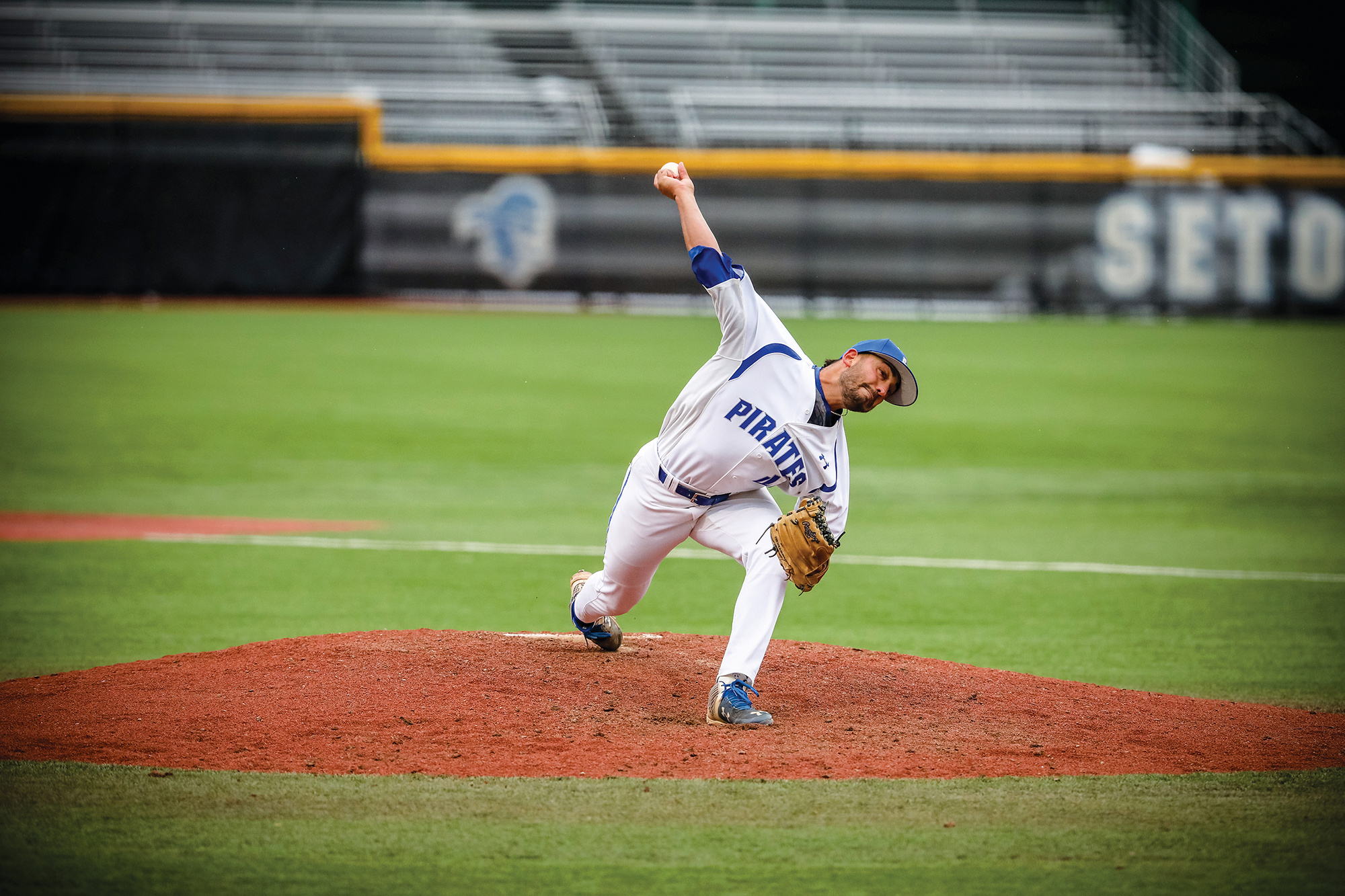 Back in the summer of 2014, Matt Leon ’18 was finishing up his senior year at Liberty High School in Bethlehem, Pennsylvania, with his baseball future very much in doubt. A skinny right-hander, Leon had his share of success at the high school level: first-team all-conference and all-area selections, two career no-hitters, and a 1.55 ERA with 85 strikeouts in 54 innings as a senior.

But Leon’s accomplishments had not translated into any offers from a Division I school.

He sent in a deposit to attend the University of Pittsburgh, facing a future that did not involve collegiate baseball. Then, in a last-ditch effort to avoid hanging up his cleats, he emailed Seton Hall’s head baseball coach, Rob Sheppard, asking for a chance to try out for the team.

“We met with Matt in the summer and told him in not-so-specific words that it would be a really hard team to make,” Sheppard said. “Even knowing that, Matt decided to come to Seton Hall.”

Leon at last had the opportunity he craved, but he acknowledged that the process of making the team was one of the most difficult years of his life.

“I was so miserable. I was sick every week because I was so stressed out,” said Leon. “You’re in the dark the whole time. It was tough; it was probably one of the toughest years I’ve ever had.”

For Sheppard, Leon’s drive to keep showing up day in and day out set him apart from other players trying to make the team.

“He is very persistent in what he wants, and if he has his mind on something, he’s going to work really hard to achieve it,” Sheppard said. “He’s the kind of guy that you can’t say no to because he’s going to try to prove you wrong.”

After months of arduous training and uncertainty, Leon was finally assured a spot on the roster for the 2015 season.

“It was awesome; it was the best moment I’ve had in recent memory,” said Leon. “I was able to give my dad a call on the way to class, and I remember I started tearing up a little because I was so relieved to be out of the dark and make the team.”

A four-year starting pitcher in high school, Leon quickly made the adjustment to the bullpen. The results were strong — opponents hit only .244 against him as a freshman, .212 as a sophomore and a minuscule .171 as a junior. His work ethic and persistence to achieve made it easy for Sheppard to make Leon the closer his senior season.

“To be in the position where your team trusts you in a tie game or with a one-run lead, that’s the role you dream of as a reliever,” Leon said. “All the pressure is on you, and the way I look at it, it’s the ultimate compliment; they’re saying ‘We trust him to get the job done.’ ”

Leon more than just got the job done last season — he posted one of the best relief seasons in Seton Hall history. With a 1.17 ERA, .205 opponent batting average, and a Seton Hall single-season record 12 saves, Leon was named a unanimous first-team All-BIG EAST selection and earned his very own social media hashtag: #LockdownLeon.

Leon, who graduated from the Stillman School of Business and earned Seton Hall’s Academic Merit Award for finishing school with a cumulative GPA above 3.2, ended his playing career having pitched 88 times for the Pirates, the second-most in school history, which is something he could have never imagined just four years ago.

“There was a time when I didn’t even really think I could play here,” Leon reflected. “But I used fear as a motivator. I didn’t want to sit on the bench or lose my roster spot. To see that I’ve contributed this whole time is nice to look back on.”

Leon’s persistence first landed him a spot at Seton Hall. Now it has landed him an opportunity to pitch professionally. In June, he signed a free-agent contract with the Los Angeles Angels of Anaheim, the latest in a long line of Pirates to turn their collegiate career into a chance at the big leagues.

Nick Santoriello ’20 is a writer for the Pirate Sports Network.