Mary Ann Christopher, M.S.N. ’83, CEO of the Visiting Nurse Service of New York, has dedicated her career to expanding community-based health care. She credits the College of Nursing with igniting her passion for focusing attention on society’s most vulnerable.

For Mary Ann Christopher, the nursing profession is part science and part art, but mostly a ministry.

President and chief executive officer of the Visiting Nurse Service of New York (VNSNY), the nation’s largest not-for-profit home health-care organization, Christopher and her organization provide a medical safety net for hundreds of thousands of the most vulnerable.

When Superstorm Sandy ravaged the metropolitan area, VNSNY went to work in New York’s five boroughs immediately after the storm. With an inter-professional VNSNY team, Christopher set up a command post in the Saint Francis de Sales School in Rockaway, N.Y. — the team sitting at kindergarten desks to organize assistance.

“We went door to door and found folks who couldn’t come down,” Christopher says. With pharmaceutical supplies airlifted and driven in, VNSNY distributed prescription refills and set up mini-clinics in various neighborhoods that had been devastated by flooding.

The experience shows the power of community-based health care in physical, spiritual and emotional terms, she says, noting that her constant thought during the response to the storm was “how blessed you are to be a health-care provider.”

Christopher’s belief in the transcendence of the nursing occupation began in childhood, when as a young girl she watched her mother, the late Mary Lee, preparing to leave for work in her white uniform. Her mother, trained at the Holy Name School of Nursing in Teaneck, N.J., “always talked with great reverence about being a nurse,” Christopher recalls.

The belief expanded with Christopher’s undergraduate nursing training at Fairfield University and came into full recognition as a graduate student at Seton Hall’s College of Nursing, where she specialized in gerontology and met “an extraordinary set of mentors.”

The late Mary Jo Namerow, M.S.N. ’78, a distinguished nursing scholar who taught in the Gerontological Nurse Practitioner program, instilled in Christopher a passion for  finding ways to help society’s most marginalized people.

“What I learned from her,” Christopher says, “was to exquisitely tell the story of our patients. By that means, there is no public policy we can’t influence.”

Dr. Leona Kleinman, also deceased, underscored what servant leadership is, she says, with a focus on gerontology and the disabled. Fran Bowers, Christopher’s clinical instructor, worked alongside her in the Vailsburg section of Newark. “She taught me that we learn as much from our patients as we do from our training.” 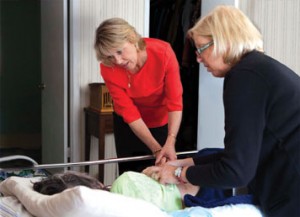 But it is Phyllis Shanley Hansell, today dean of the College of Nursing, who has been the longest-lasting influence. Christopher credits Hansell, her professor in the nurse practitioner master’s program, with teaching her “how to blend the intellectual rigor of science with a mindfulness about the care of patients and a passionate belief in the sanctity of the nursing profession.”

For her part, Hansell remembers a stellar student who was passionate about nursing. “Mary Ann had an inner drive to make a difference for the elderly. She was extremely bright and scientific, yet very soft at the same time.”

It’s no wonder, then, that the two began to work together, first in nursing circles and then over Christopher’s 29-year career at Visiting Nurse Association of Central Jersey, where as CEO for a decade she expanded a two-county provider into a statewide organization. She developed services such as home health care, hospice care, community-based prevention and outreach initiatives, clinics for the poor, and school-based health care.

The Hansell-Christopher team has scored a number of New Jersey nursing firsts, most recently winning a Robert Wood Johnson Foundation grant of about $5 million to support the annual study of 10 doctoral students at Seton Hall, the dean says. The New Jersey Nursing Initiative program aims to address the state’s extreme shortage of nurses with graduate credentials who are prepared to teach, Hansell says.

Addressing a different type of gap — community-based care for the elderly — was the reason Christopher joined the Visiting Nurse Association Health Group in Red Bank, N.J., having been recruited in 1985 to run a federal pilot program to find young mothers on welfare to take care of the chronically ill and elderly. A stunning success, it became the platform for the Medicaid waiver program, a federal-state effort to fund medical and long-term services for low-income aged, blind or disabled individuals, and families with children.

Over the years, Christopher’s connection to Seton Hall has become only stronger. She became a member of the School of Nursing’s advisory board in 2000, and in 2010 joined Seton Hall’s Board of Regents.

Another University connection is her partnership with Dr. Kenneth W. Faistl ’71, a family medical practitioner based in Colts Neck, who was her mentor and preceptor during her nurse practitioner training.

Twenty years later, the doctor — certified also in geriatrics and addiction medicine — saw Christopher at a reception. “And we got to talking about how we could work together on community health solutions for people outside the safety net, such as the uninsured or underinsured,” Faistl says. “And this began with the realization on my part that the Visiting Nurse Association she was heading was providing care to a lot of my patients.” He was soon on her board.

Another milestone in Christopher’s career was a federal grant to build the Asbury Park Healthcare Center and, eventually, similar community healthcare facilities in Red Bank and Keyport, N.J. “She’s one of those kinds of people who want to make things better in the world,” Faistl says.