Laquan Ford ’13 needed a helping hand. Nick Scalera ’63 was there to offer it. The bond they formed has made a profound difference — for them both.

For an inner-city Newark teenager, the son of a father who sold drugs and a mother who was addicted to heroin, life at Seton Hall University was once unimaginable. 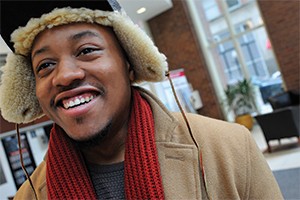 “As a very young boy, I wondered what Seton Hall was,” recalls Laquan Ford ’13, who used to earn money raking leaves in the lush nearby neighborhoods of South Orange. “I never knew it was a college because I didn’t know what a college was then.”

What Ford did know about was parental absence. He grew up in the care of an ailing great aunt — whom he calls his grandmother — until she died, when Ford was still in high school. Afterward, he found shelter with friends.

There was another thing that was unfathomable to Ford growing up: Accustomed to abandonment and discord, he was “not comfortable with love and caring.”

But time has changed Ford’s perspective. Seton Hall gave him a fundamental lesson in the value of both education and loving commitment. And for this, Ford — now seeking a graduate degree in social work at Loyola University Chicago — credits the supportive environment of the University community and the efforts of one man in particular: Nick Scalera ’63.

Scalera arrived in Ford’s life by happenstance. After the recession of 2007–09, scholarship money had become scarce, and Ford was facing the prospect of having to drop out of Seton Hall during his sophomore year.

By then, Ford had established a stable life on campus.

He was involved in numerous organizations, even helping to found the campus group Black Men of Standard, a support organization whose motto is “As we rise, so does the standard.” But his association with Seton Hall, which dated back to his enrollment in a University-sponsored program at Newark’s West Side High School, looked perilous.

Meantime, Nick Scalera was in the process of establishing a scholarship designed to provide assistance to Seton Hall students in need. In 2011, Ford became one of the Nicholas R. Scalera ’63 Scholarship’s first recipients, awarded to academically proficient students from Essex County who demonstrate “substantial financial and social need.” It is a strictly needs-based scholarship, which is critical to the University, and is designed to “bridge the gap” between aid, loans and other scholarships.

For Laquan Ford, it was the monetary equivalent of the cavalry arriving. That first year, two of the scholarship recipients were officially homeless, but Ford’s needs “were truly overwhelming,” Scalera says. The scholarship kept Ford in school.

Over time, Scalera’s donation has worked to transform both their lives. In fact, Scalera had an ability to understand the young man in a way few adults could. He once headed up New Jersey’s child protection and welfare agency, an organization Ford had encountered multiple times growing up.

Today, Ford sees Nick as a father figure who has not only helped shape his future, but also gave him his first real understanding of family. Scalera sees a version of himself, growing up as he did in an Italian working-class family that struggled to put him (the first member of his family to enter and graduate from college) through Seton Hall.

After the two met at the scholarship’s induction luncheon, they saw a basketball game and later met for coffee. “I wound up becoming his mentor,” Scalera says. “It was not by design. But when I saw how hard he was struggling, I just had to respond.”

At one of their get-togethers, Scalera handed Ford his business card. “I said, ‘Feel free to call me. Don’t just sit there waiting for the sky to fall.’ ” It was an outreach, he explains, to “someone hurt many times by adults who promised things and never delivered.”

Respect and trust deepened as their relationship developed over time. Last Christmas, since Ford had no family to come home to from Chicago, he was welcomed by Scalera’s extended family. “It seemed like their entire focus was on me,” Ford says of the holiday. “It was unbelievable. It was the first time I ever had a gift under a Christmas tree.”

What’s more, getting to know Scalera has inspired Ford to find his life’s purpose. Today, his goal is to become either a high-school superintendent, college dean or the head of New Jersey’s child protection agency, as Scalera once was.

Will he succeed? Scalera’s prediction is a resounding yes: “Here’s a young man who went through an incredible amount of adversity, yet he never gave up. He’s not bitter, he’s not angry. All he does is look forward and set his eyes on his goal.”