Representing the U.S. at the international G(irls)20 summit gave Cynthia Sularz the spark she needed to follow her passion — empowering other young women.

As the United States’ delegate to the 2014 G(irls)20 summit, Seton Hall junior Cynthia Sularz spent a week in Australia networking with prominent women from around the world.

But it was a woman who wasn’t there who influenced her most. 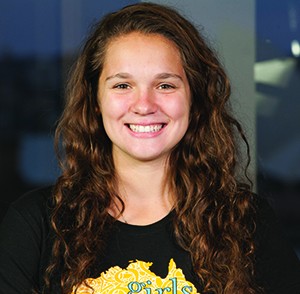 Mirroring the Group of 20 economic summit, the G(irls)20 event brought together delegates from G-20 member nations, as well as a selection of other countries, including Pakistan and Afghanistan, to draft a communiqué encouraging their governments to address female economic issues.

Fatima Hashimi, the G(irls)20 delegate from Afghanistan, was prevented from traveling to Australia when the government of Afghanistan denied her exit visa. But on the final day of the summit, she joined the other women via Skype to speak about increasing girls’ access to education.

Sularz had been working for years on a personal project to help young women gain the confidence to speak out in the classroom, but she had not yet brought the topic into her formal studies. Listening to Hashimi speak with self-possession and passion about increasing access to education despite the obstacles young women in many developing nations face sparked an epiphany.

“Our experiences have been so different, and yet they led us to similar conclusions about what we want to change in the world — to make this world better for women and girls,” Sularz says.

“Cynthia is built to soar,” says Farah Mohamed, the CEO of G(irls)20. “She’s very clear on the fact that she wants to do something important with her life. … Fatima was an example to all of the girls of what they’re fighting for: They could relate to her because she’s trying to do what they’re trying to do, which is to chart their own futures. But she has a set of challenges they won’t have to deal with. And Cynthia was very impacted by that.”

A diplomacy and international relations major, Sularz traces her interest in international affairs to her parents, natives of Poland, who discussed the news of the day through a global and historical lens. Her studies have taken her to Poland and Germany, and last summer, she taught English to children in Russia.

Even as she was focusing on global issues in her coursework, Sularz was working on an extracurricular project exploring why girls tend to apologize more than boys in the classroom. But while she hoped to create some kind of educational program on the topic, she was unsure of how to do it until the G(irls)20 summit gave her the tools.

Over the course of a week in August 2014, she and her fellow delegates participated in workshops on communications and leadership skills, entrepreneurship, and activism and grassroots campaigns. They then spent 24 hours composing the communiqué to be presented to the G-20 representatives with recommendations supporting the economic advancement of women and girls worldwide.

The process gave the delegates a platform to discuss topics that affect young women in each of their nations. From wage equity and the prevention of sexual violence and harassment in the workplace to the integration of women into the fields of science, technology, engineering and mathematics and the guarantee of basic sanitation in schools, they educated one another about the economic consequences of social-justice issues.

As she listened to the delegates speak, Sularz says, her passion for women’s issues crystallized into a career focus. Since the summer, she has been interviewing young American women for a video project exploring gender and confidence.

“I want to start a dialogue by getting a grassroots perspective on these issues from actual college students: the fears they have, the ideas they have about the future, how socialization has affected them to this point in their lives,” she says. “My overarching goal is to give girls who haven’t been able to talk about these things a place to express themselves.”

Sularz plans to expand the project into an educational workshop. She is also working on initiatives with the international organizations PeaceWomen and Girl Up.

“I’m not sure if I want to go the bureaucratic route or the NGO route,” Sularz says, “but I am 100 percent sure that I want to devote the next few years of my life to empowering adolescent girls.”