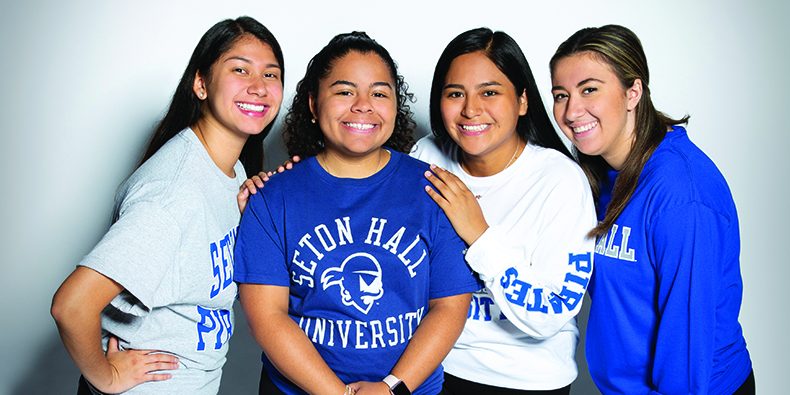 Published October 10, 2018
A new program at Seton Hall provides critical resources — and support — to incoming freshmen who are the first in their families to attend college.

At Seton Hall, one in every four freshmen is a first-generation college student — meaning neither parent has a college degree.

Navigating the first year of college is tough for anyone, but “first-gen” students often face different challenges. Most juggle outside jobs and family responsibilities with schoolwork. Though eager to offer support, their parents can’t share firsthand experience with writing a college essay or navigating dorm-room etiquette. And there’s an intense pressure to make everyone proud and pull off a family first by earning a college degree.

As a result of the difficulties they bump into as freshmen, first-generation students in general are less likely than their peers to finish college in four years — or to graduate at all. Among Seton Hall freshmen, there’s a seven point retention difference between first-gen freshmen and their classmates.

That’s why the University unveiled a new program for its first-generation freshmen in summer 2017. It starts with a weeklong “bridge” in August, but continues throughout the year with academic coaching, scholarship opportunities and pizza-fueled gatherings.

Here’s a look at what exactly the Gen 1 program entails, the students it’s helping, and the faculty and staff who are powering it.

“The primary goal of the Gen 1 program is to ensure that our first-generation students have a clear sense of belonging and an understanding of the skills they need to perform college-level work,” says Nicole Battaglia ’11, director of first-year initiatives.

For its debut in 2017, the program invited all first-gen freshmen to join a 10-day summer “bridge” program in late August. Twenty-four students signed up.

Each day included guest speakers who shared their expertise on everything from managing stress to using the career center to landing outside scholarships. Mornings incorporated a workshop on college-level math courses, and in the afternoons, students had a grammar and writing workshop to prepare them for college papers. The program also supplied students with a “Seton Hall Dictionary,” so they’d know what people meant by things like “the bursar” or “the Green.”

On Saturday, the group headed into Manhattan and saw School of Rock on Broadway. They walked down South Orange Avenue together, found the train station, and made their way into the city. Battaglia says it helped the students get used to navigating NYC — and for some, it was also their first time seeing a Broadway show.

On Sunday, they painted positive messages on stones as part of the Kindness Rocks project. Those painted rocks popped up all around campus throughout the fall semester, hidden in bushes or under benches, but no one else knew the story behind them or who to thank.

Meeting VIPs
The program kicked off with a barbecue for all the Gen 1 students and their families. Also on the guest list:
Interim President Mary Meehan ’72/M.A. ’74/Ph.D. ’01, who was a first-generation Seton Hall student herself.

That night, each student got a photo standing beside Meehan. They met deans and vice presidents and other high-level administrators. “Right off the bat, they’re making connections to make them feel that they belong,” says Robin Cunningham ’78/M.A. ’84/Ed.S. ’96, associate vice president and dean of freshman studies. “That’s our most important objective: that these students feel comfortable here and know that they could walk into the vice president’s office as easily as anyone’s.”

All Over Campus
“We really tried to throw a net over the whole University community to celebrate first-generation status,” Cunningham says. The program identified about 80 first-gen faculty and administrators and put their names, photos and titles onto posters, then hung those posters all over campus. They also distributed blue stickers with “Gen 1” splashed across them and encouraged faculty and staff to post them in their offices. Students have stuck them up in their dorm rooms, too, and Cunningham reports spotting one on the back of a car recently.

Mentors Who Understand
The Gen 1 students received academic coaches and peer advisers, just as other Seton Hall freshmen do. But their mentors had extra insight, since they also had been the first in their families to attend college — or had a special interest in helping those who are.

No Charge
The Gen 1 program, including the summer bridge, was offered free to students. Participants also received a $500 textbook voucher after completing the program.

What Sophomores Say, After Year One

Hannah Curran
“Once the summer program was over, we stayed in touch. We still have a group chat. We try to get dinner or breakfast here and there. We spend a lot of time together. It’s almost like a family.”

Leidy Nizama
“I’ll be hanging out on the Green and I’ll see Dean Gottlieb or Dean Cunningham and wave at them or say hi and talk to them. It’s like a big community. I’ve met some professors who I notice have a Gen 1 sticker on their door. It’s something that connects us. If I go in to talk to them, it’s like, Hey, I noticed you’re Gen 1, too. It opens a new door.”

Elizabeth Rodriguez
“I’m still very involved [with the Gen 1 program]. Our cohort created a first-generation student club on campus, and I’m the president. We have a lot of events planned for this coming semester: stress relief days where we’re going to help people cope with finals and midterms; speakers coming in to talk about scholarship opportunities; people who were first-gen students coming in to discuss their experiences; movie nights and game nights. My goal is to really create a community for first-gen students on campus, even those who weren’t in the summer program.”