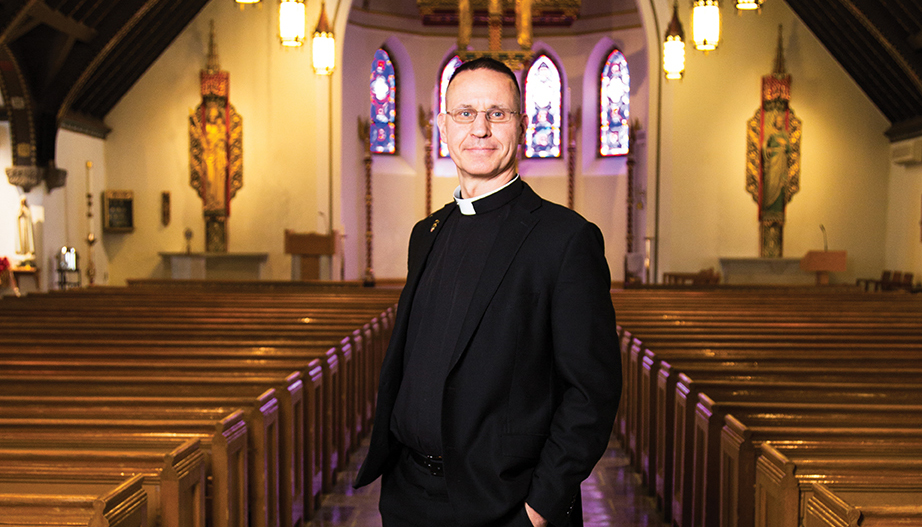 Published May 8, 2018
Though Catholic priests are underrepresented as chaplains in the U.S. military, priests with Seton Hall connections have made an outsized impact in their service of fellow servicemen and women.

The letters are tattooed in five vertical lines down Father Matthew Pawlikowski’s right tricep, as orderly as soldiers in formation. They spell out the last names and death dates of five wartime priests who gave their lives for others: Kolbe, Washington, Kapaun, Capodanno and Watters.

Four of the priests were, like Pawlikowski, M.D.M.’98, U.S. military chaplains. Three of them — Emil Kapaun, Vincent Capodanno and Charles J. Watters ’49 — received the Medal of Honor. Two — Watters and John P. Washington ’31— had Seton Hall ties, like Pawlikowski. The fifth, Saint Maximilian Kolbe, was a Polish priest imprisoned during World War II who took the place of a stranger marked for death at Auschwitz.

“These are heroes of mine,” says Father Pawlikowski, who got the tattoo while stationed at Fort Bragg in 2010. Before that, he carried a dog tag honoring his heroes.“I brag about those guys. That’s our history; that’s our story and they’re heroic stories. People listen to stories.”

Since becoming an active-duty Army chaplain in 2000, Father Pawlikowski has told these stories in Afghanistan, Germany, Egypt and on Army bases across the United States. Now a colonel, he tells the tales at West Point, where he is the first Catholic priest to serve as the senior chaplain at the U.S. Military Academy.

Outside his office hang the portraits of a long line of Protestant ministers who preceded him. Inside the office hang photos of the chaplains whose names he has made a part of his own body, and on the windowsill is a photo of his tattooed arm next to Father Watters’s gravestone at Arlington National Cemetery. On his desk is his breviary with a photo on its cover of a priest-chaplain friend praying over a bloodied Marine in Iraq.

“Here’s an American doing a job most of us would rather not do, and are not willing to do, but that needs to be done. And he puts his life on the line, and he gets himself hurt,” Father Pawlikowski says, pointing to the Marine in the photo. “He’s entitled to the ministry of the Church, and so we have to be there.”

Father Pawlikowski, 53, knows about doing both those jobs, because he was a West Point graduate, Army Ranger, paratrooper and infantry officer before he became a priest.

“I think soldiers and service members tend to have a little more oomph than other people, no matter what it is. So if they’re living their faith life, they’re living it well. And if they’re sinning, they’re sinning with gusto,” he says. “But honestly, I see that as a virtue. They have a zest for life. So I love serving soldiers, and
I’m not at all bothered by their coarseness or their rough edges. I don’t think Jesus was bothered by people’s rough edges.”

Father Pawlikowski switched to the Army Reserves in order to study for the priesthood at Immaculate Conception Seminary at Seton Hall, where he learned about Father Washington, Father Watters and the long line of Seton Hall priests who have served both God and country in the military. “That’s a pretty impressive pedigree,” he says.

During Army Ranger training, he found himself leading his squad in prayer each morning. “‘Help us to serve one another’— that was our prayer,” he says. “The last 10 days of Ranger school, this is one time God spoke to me with absolute clarity. God said, ‘Yes, I want you to be a priest.’”

After six years as an infantry officer, Father Pawlikowski arrived at Immaculate Conception Seminary. “My first day at Seton Hall, I walked over to the ROTC detachment and said, ‘Hey, how would you like an unofficial chaplain for the next couple of years?’” he says. He often talked to the cadets about Father Watters, after whom that ROTC detachment was named. “There was a little monument to him on the grounds, overgrown by bushes. We moved it, put it in a more prominent spot, put a light on it, and read his Medal of Honor citation. It moves you to tears every time.”

Ordained in 1997, Father Pawlikowski was a civilian priest for three years, as required by both the archdiocese and the military, serving at Saint Thomas the Apostle in Bloomfield, New Jersey, before returning to active duty. He worked as a chaplain at West Point from 2007-09 before returning to the military academy in 2015 as the senior chaplain.

Ministering to soldiers and their families has widened his view as a priest — he began to offer the sacrament of the anointing of the sick to those whose hurt was mostly hidden. “We have soldiers coming back and they have PTSD [post-traumatic stress disorder],” says Father Pawlikowski. “They have these wounds that are not physical wounds, but they’re real wounds, and they’re in need of healing. I would like it if when I die, 30 years later, people were talking about me as the priest who advanced the wider use of the sacrament of the anointing of the sick.”

What people were talking about recently was a photo of Father Pawlikowski kneeling in his dress uniform behind the bench at the 2016 Army-Navy football game.

“I pray the rosary at every football game, but this was Army-Navy, so I planned to pray all four mysteries, one per quarter, basically,” he says. Time was short in the fourth quarter and Navy was ahead. “It was pretty tight, so I said, ‘Well, maybe I should pray like I mean it,’ and I got on my knees. I do want Army to
win, and I certainly tell God that, but what I’m supposed to do is pray the rosary. I shut my eyes and I could hear cheers, but I was trying not to focus on that. My job was to pray the rosary.”

The cheers Father Pawlikowski could hear as he prayed were inspired by the touchdown that gave Army the lead in the game — and their first win over Navy in 15 years.

BAND OF BROTHERS
Here are the stories of a few other military chaplains with Seton Hall connections (in addition to Father Pawlikowski and Father James Hamel ’88/M.D.M. ’92/M.A.T. ’99, who was featured in our Fall 2007 issue), who exemplify modern-day priestly service in the military.

North Atlantic, 1943
Just before 1 a.m. on February 3, 1943, the Dorchester, a passenger liner pressed into service as a troop carrier, was steaming toward an American base in Greenland. Among the 900 men on board was Father John Patrick Washington ’31, a graduate of Seton Hall College and the Immaculate Conception Seminary. Father Washington was a young parish priest when Pearl Harbor was attacked, but soon after enlisted in the military and became a chaplain.

That night from a German U-boat prowling the Atlantic a torpedo hit the Dorchester midship, and frigid water poured in.

As it sank, the Dorchester listed at such a steep angle that many of its lifeboats could not be launched. Amid the chaos, Father Washington, a rabbi, and two Protestant ministers calmly handed out life jackets. When none were left, the chaplains took off their own and gave them to four young soldiers.

Some of the 230 men who survived caught a final glimpse of the chaplains, arms linked, praying together as the ship slipped into the sea. The four men, symbols of wartime solidarity and sacrifice, were posthumously awarded the Distinguished Service Cross. Congress attempted to award them the Medal of Honor, but the conditions of the incident prohibited it. Instead they were awarded a Special Medal for Heroism.

Vietnam, 1967
On November 19, 1967, near Dak To, Vietnam, paratroopers of the 173rd Airborne Brigade advanced on Hill 975, which they thought had been cleared of the enemy. It had not. Among the men heading into this ambush was a priest whose 12-month tour had ended in July, but who had signed on for six months more: Father Charles J. Watters. He carried no weapon but his faith.

After graduating from Seton Hall and Immaculate Conception Seminary, Father Watters ’49 worked as a chaplain in the Air National Guard while serving as a parish priest in the Archdiocese of Newark. He joined the Army as a chaplain in 1964.

Known for staying close to combat, Father Watters tended to the wounded and gave Last Rites to those slipping beyond medics’ help. “Without hesitation and ignoring attempts to restrain him, Chaplain Watters left the perimeter three times in the face of small arms, automatic weapons and mortar fire to carry and to assist the injured troopers to safety,” Father Watters’s Medal of Honor citation reads. “When a wounded paratrooper was standing in shock in front of the assaulting forces, Chaplain Watters ran forward, picked the man up on his shoulders and carried him to safety.”

Chaplain Watters was giving aid to the wounded when he himself was mortally wounded.

The Pentagon, 2001
On the morning of September 11, 2001, Father Frank O’Grady, M.D.M. ’81 was working at Fort Belvoir south of Washington, D.C., the nearest Catholic chaplain when terrorists sent American Airlines Flight 77 crashing into the Pentagon.

“People were absolutely shell-shocked,” he says. “In times of crisis everybody needs prayer, and people found in prayer — you could see it in their faces — tremendous comfort.”

Father O’Grady stayed at the Pentagon for five nights. He and the Protestant chaplain serving with him soon settled into a grim routine. “The young soldiers who were the casualty team would go in to bring out the remains, and we would go in with them. It was pitiful to see. Their hands were burnt to the computer, some of them,” says Father O’Grady, who received an Army Commendation Medal. “They would carry out the remains, and we would pray over them. It was all done at night so that nobody would be around.”

Father O’Grady was serving at Our Lady of Pompeii in Paterson, New Jersey, in 1987 when a worshiper asked him to say Mass for an Army Reserve unit in nearby Lodi. By 1994, at the age of 49, Father O’Grady became an active-duty Army chaplain, serving in South Korea, Germany and several bases in the U.S. Since 2011, he has been making rounds at Walter Reed Medical Center. “Many, of course, their faith is pretty weak, as you can imagine,” Father O’Grady says of the wounded soldiers he sees. “I try to give them a sense of hope.”

“You go in with a smile on your face and you sit down by their bed. And then, if they want to talk, you ask them where they’re from. Many of them won’t want to talk about their previous assignment; so we don’t bring that up. You end up asking, ’Would you like to pray? Would you like a prayer?’ Whatever they want —it’s all about them.”

Father O’Grady, 72, retired as a lieutenant colonel in January, the oldest chaplain in the Army. His departure diminished the already thin ranks of Catholic chaplains — currently there are just 84 out of 1,200 Army chaplains.

Portland, Maine, 2018
“One thing we’ve got plenty of is Protestant chaplains,” says Father Peter Uhde ’78, M.D.M. ’80 who retired last year after 40 years of military service, the last 17 as an active-duty Army chaplain. He joined the Air Force Reserve as a seminarian, having spotted a recruiting poster in the mailroom. From 2010 to 2012, his job was to recruit other chaplains. “You go any place you might be able to find a priest,” he says, “and quite honestly, not just priests, but rabbis and imams. I was recruiting for clergy, who were desperately needed.”

Do you know of other Seton Hall military chaplains? Share their story with us at shuwriter@shu.edu. Find Father Hamel’s story at blogs.shu.edu/magazine

Kevin Coyne is a freelance writer based in New Jersey.