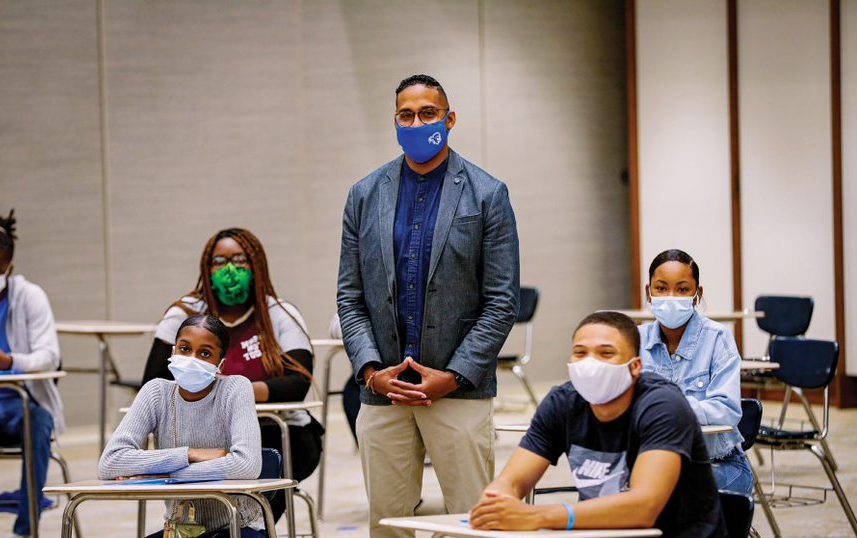 Higher education was far from Juan Rios’s mind when he got his first job at age 14. Through a local youth program in New Haven, Connecticut, he spent the summer cleaning up public housing complexes — restoring facades, tidying park areas, and often throwing away empty crack vials and used needles.

He earned $3.75 an hour (this was the early 1990s), and “it was because of that money that I was able to buy lunch, dinner, and even my school materials,” says Rios, now an assistant professor and director of the master’s in social work program at Seton Hall. “I can’t imagine what would have happened to me if these programs had been canceled because someone didn’t meet the call.”

But due to the global pandemic, that could easily have been the fate of a similar program in East Orange this summer if a team including Rios hadn’t stepped up to help.

Through its annual Summer Work Experience Program, the city offers teens summer jobs, just as Rios had at their age. Nearly 400 people participated in the six-week program last year, with assignments ranging from sprucing up city fire hydrants to creating an art mural to interning in the mayor’s office. These paid experiences were all put in jeopardy this summer, though, when COVID-19 swept on-site work off the table. Then VIP Online Academy, co-led by author and activist Jamila Davis, offered to help put the program on the internet, and soon Seton Hall became a partner in the effort.

“I wanted Seton Hall to be involved because I really believe in the [University’s] strategic plan — especially the portion about community outreach to promote the greater good of society,” Rios says. This year’s Virtual Summer Work Experience Program in East Orange is “a direct, quick, immediate response to a need that’s happening in the community,” he adds.

Rios oversaw the academic track, which supplied a taste of college life, introduced “faculty members who look like them and may have had similar life experiences to them,” and conveyed the crucial message that “I, too, can go to college,” he says.

The slate of presenters included Majid Whitney, associate dean and director of Seton Hall’s Educational Opportunity Fund Programs, and first-year adviser/ROTC Military Science instructor Julius Moore. Rios presented, too — and as he spoke to the East Orange teens about trauma in low-income communities, “a lot of memories came flooding back,” he says.

Born in Panama and raised in New Haven and later Jersey City, Rios was the youngest of three siblings. He recounts how his family experienced a range of issues, including financial struggles and frequent upheavals. “Many would consider me a statistic,” he says.

As he watched friends and neighbors die from drugs or violence, Rios never expected to live past 18 himself. “I saw … where I didn’t want to go,” he says. “So what’s the only [path] no one has tried? Stay in school.” He also needed the free meals that school offered, he says. At times, those meals were the only reason he kept showing up.

Thanks to free social programs and a series of strong mentors who became surrogate family, he got through high school and was accepted into Southern Connecticut State University. “I didn’t care how many student loans I had to take out, I just wanted to get away,” he says.

In the wake of his own experiences with social workers and Child Protective Services, Rios majored in social work. “I swore, since 15 years old, I wanted to be a CPS worker because of all the influences they had in my life,” he says. “I wanted to be someone who could help those kids being transitioned from home to home do it in a way that’s healthy and inspiring.”

But after several years, “I realized that you can’t really change the system from within,” he says. So he pursued master’s and doctoral degrees in social work at Rutgers.

Today Rios’s research focuses on social justice and its intersections with virtual reality. He plans to study how children — “especially Black and brown children” — respond to emerging technology, including online communities like the one he helped provide for East Orange kids this summer.

“If it wasn’t for the opportunity of this virtual community, what would have been the alternative for these children?” Rios wonders. He already knows the impact such programs had on his own teen years. But now, several decades later, he has the chance to evaluate and measure them as an academic — a twist he never saw coming at age 14.