Platelets are the second most abundant cellular component of blood. The platelet membrane contains an abundance of receptors to facilitate interactions with subendothelial matrix , other blood cells, and other platelets. The central role of platelets is in hemostasis, however, they also contain copious amounts of cytokines that induce inflammation.

The platelet’s expression of Toll-like receptors (TLRs) indicates a capacity to directly engage microbial pathogens similar to leukocytes. Only a fraction of the platelet population is needed to maintain adequate hemostasis, suggesting that the excessive numbers allow platelets to act as major vascular surveyors of blood for recognizing foreign particles.

Given the central role of inflammation as a cancer promoter, platelets are important contributors to tumorigenesis:

In 2000, Hanahan and Weinberg defined 6 hallmarks of cancer: (1) self-sufficiency in growth signals, (2) insensitivity to growth-inhibitory signals, (3) resisting cell death, (4) limitless replicative potential, (5) sustained angiogenesis, and (6) metastasis.In 2011, the list was updated with addition of other essential characteristics, such as cellular and microenvironment alterations necessary for malignant transformation, dysregulation of cell energetics, avoidance of immune destruction, genomic instability, and tumor-promoting inflammation. Indeed, many of these hallmarks resemble the inflamed state, placing the platelet within an interface that links thrombosis, inflammation, and cancer. 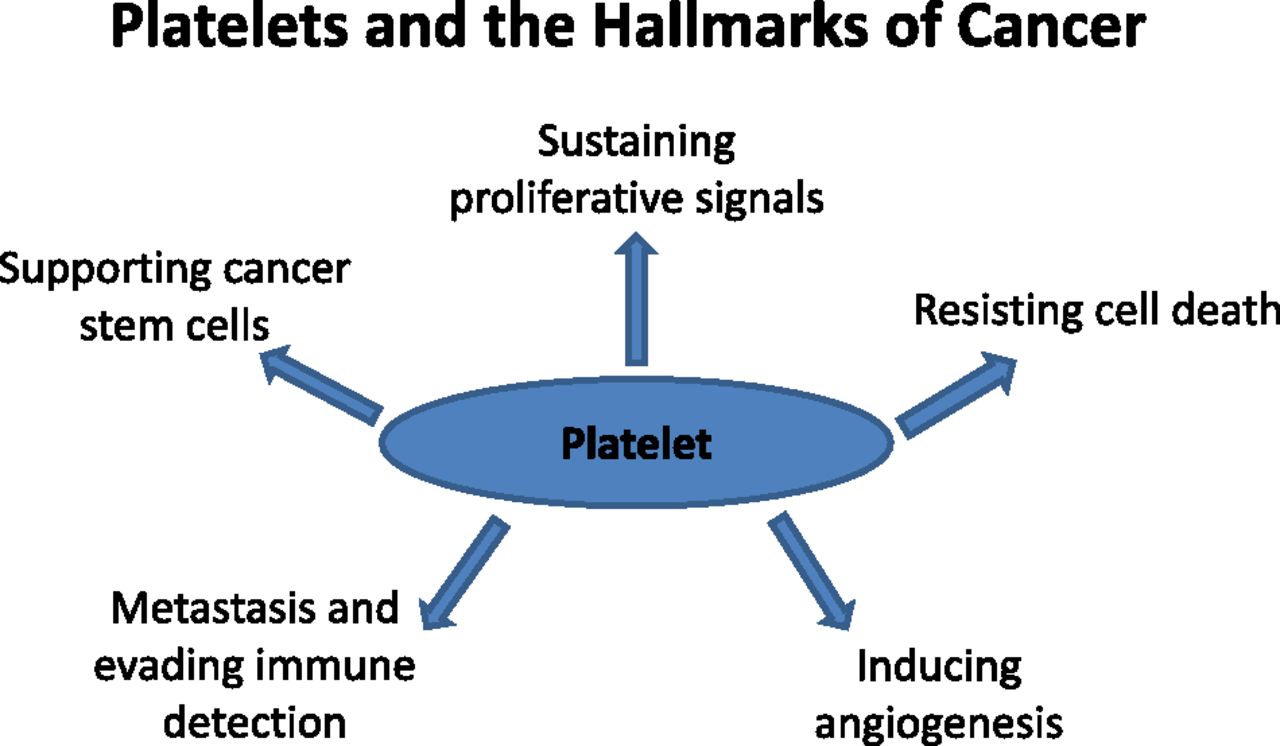 Figure 1. Platelets and the hallmarks of cancer. The original hallmarks of cancer included 6 biologic capabilities acquired during the complex development of tumors. Highlighted and discussed in the text are circulating platelet properties that contribute to some of the hallmarks. Thus, the platelet can be viewed as a normal cell contributing to the hallmark traits and influencing the TME. Antiplatelet therapies in the realm of cancer development and progression represent a future direction likely to impact patient prognosis and outcome. http://www.bloodjournal.org/content/126/5/582?sso-checked=true

Platelets interact with circulating tumor cells, protecting them from shear forces and immunological attack, and providing chemokine signals to maintain their viability during the metastatic process.

After surgery for removal of primary cancers, the wound healing process is initiated. Local recurrence following surgery is commonplace, and adjuvant chemotherapy is often administered to kill residual cells in the tumor bed that were not removed surgically. However, due to anatomic alteration caused by the surgery, disrupted blood supply and hydrostatic pressure gradients can impede the delivery of drugs to the surgical area from the systemic circulation. However, platelets are recruited to surgical wound. Could platelets be used as a delivery vehicle for anti-cancer therapies?

Researchers conjugated anti-PD-L1 monoclonal antibodies to the surface of platelets and administered them to mice following surgical removal of melanoma and triple negative breast cancer:

Conjugating anti-PDL1 (engineered monoclonal antibodies against programmed-death ligand 1) to the surface of platelets can reduce post-surgical tumour recurrence and metastasis. Using mice bearing partially removed primary melanomas (B16-F10) or triple-negative breast carcinomas (4T1), we found that anti-PDL1 was effectively released on platelet activation by platelet-derived microparticles, and that the administration of platelet-bound anti-PDL1 significantly prolonged overall mouse survival after surgery by reducing the risk of cancer regrowth and metastatic spread. Our findings suggest that engineered platelets can facilitate the delivery of the immunotherapeutic anti-PDL1 to the surgical bed and target CTCs in the bloodstream, thereby potentially improving the objective response rate. 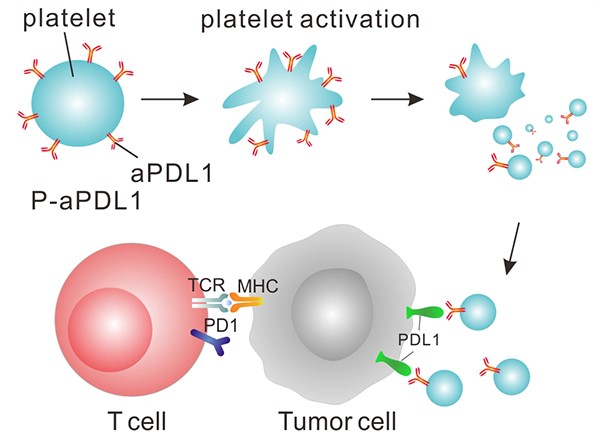 The engineered platelets release PD-L1 antibody, which mutes the immune-dampening stimulus(PD-L1)  expressed on cancer cells, as well as cytokines that induce inflammation by recruiting other immune cells. The combination of activities provided for a very effective post-surgical adjunctive treatment. Moreover, the effects should be limited to areas where platelet activation is induced – the wound site, circulating tumor cells, and metastatic deposits:

The research team chemically linked a PD-L1 inhibitor to platelets they isolated from mice. They found that activation of the engineered platelets in the laboratory caused them to release the inhibitor along with the expected immune system-stimulating chemicals.

To test whether the engineered platelets could prevent the formation of metastatic tumors, the researchers injected melanoma cells into the bloodstream of mice from whom tumors had been removed surgically. At the same time, they injected the mice with normal platelets, PD-L1 inhibitor alone, or engineered platelets.

The researchers observed similar results when they treated mice bearing an aggressive type of breast cancer with the engineered platelets.