Tagrisso (osimertinib) is a kinase inhibitor indicated for patients with metastatic epidermal growth factor T790M mutation-positive lung cancer. It was approved under accelerated approval provisions in November 2015 on the basis of phase 2 trials demonstrating a combined overall objective response rate of 59%.

As part of the approval, a phase 3 confirmatory was mandated.

Among patients with advanced non–small-cell lung cancer with a mutant epidermal growth factor receptor (EGFR), EGFR tyrosine kinase inhibitors (TKIs) are the standard first-line therapy. Despite high tumor response rates with first-line EGFR-TKIs, disease progresses in a majority of patients after 9 to 13 months of treatment. At the time of progression, about 60% of patients (regardless of race or ethnic background) are found to have a p.Thr790Met point mutation (T790M) in the gene encoding EGFR. The presence of the T790M variant reduces binding of first-generation or second-generation EGFR-TKIs to the ATP-binding pocket of EGFR, thereby reducing EGFR-TKI–mediated inhibition of downstream signaling and potentially leading to disease progression. 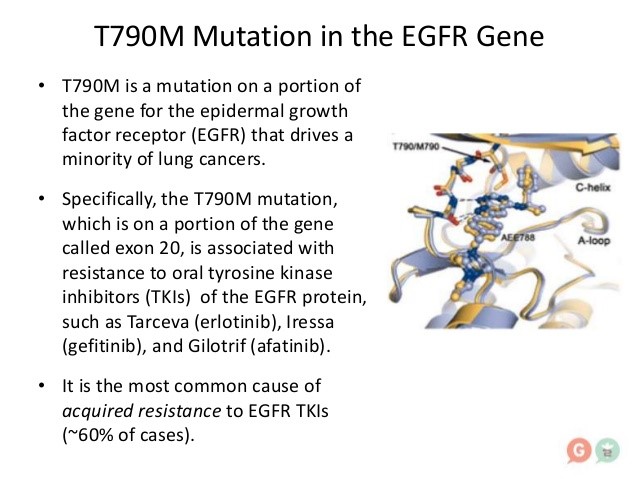 Osimertinib is an oral, irreversible EGFR-TKI that is selective for both EGFR and T790M resistance mutations with activity in the central nervous system (CNS). In the phase 1 component of AURA, a phase 1/2 trial (ClinicalTrials.gov number, NCT01802632), the objective response rate for osimertinib in patients with T790M-positive non–small-cell lung cancer was 61%; the median duration of progression-free survival was 9.6 months. These findings were confirmed in a pooled analysis of two subsequent phase 2 studies of osimertinib (at a dose of 80 mg once daily) in 411 patients with T790M-positive non–small-cell lung cancer, in which the response rate was 66% on blinded independent central review and the median duration of progression-free survival was 11.0 months. A confirmatory, randomized, open-label, international, phase 3 trial (AURA3) was conducted to show the superiority of osimertinib over platinum therapy plus pemetrexed (followed by optional pemetrexed – a folate analog that inhibits thymidylate synthase – maintenance) as standard of care for patients with centrally confirmed T790M-positive advanced non–small-cell lung cancer after first-line EGFR-TKI therapy. Here, we report the results from AURA3.

In the phase 3 study, all patients had evidence of advanced or metastatic non–small-cell lung cancer and of disease progression after first-line EGFR-TKI therapy and were randomized in a 2:1 ratio to receive oral osimertinib (at a dose of 80 mg once daily) or intravenous pemetrexed (500 mg per square meter of body-surface area) plus either carboplatin or cisplatin. The primary endpoint was progression-free survival.

Tagrisso reduced the risk of disease progression by 70 percent, with PFS of 10.1 months versus 4.4 months for standard platinum-based doublet chemotherapy. AstraZeneca noted that in the 34 percent of patients with central nervous system metastases at baseline, PFS was also significantly greater with Tagrisso than with platinum-based doublet chemotherapy at 8.5 months and 4.2 months, respectively. The drugmaker indicated that it would continue to monitor patients to see if the improvement in PFS also translated over time into increased overall survival.