An experimental therapy made of genetically-modified donor T-cells cured a baby with incurable leukemia:

One-year-old Layla had run out of all other treatment options when doctors at Britain’s Great Ormond Street Hospital (GOSH) gave her the highly experimental, genetically edited cells in a tiny 1-milliliter intravenous infusion.

Two months later, she was cancer-free and she is now home from hospital, the doctors said at a briefing about her case in London on Wednesday.

The treatment was provided by Cellectis Therapeutics, a company that specializes in CAR (chimeric antigen receptor) T-cells from donors.

The gene-edited cell treatment was prepared by scientists at GOSH and University College London (UCL) together with the French biotech firm Cellectis, which is now funding full clinical trials of the therapy due to start next year.

It is designed to work by adding new genes to healthy donated immune cells known as T-cells, which arm them against leukemia.

Using a gene-editing technology called TALEN, which acts as “molecular scissors,” specific genes are then cut to make the T-cells behave in two specific ways: Firstly, they are rendered invisible to a powerful leukemia drug that would usually kill them and secondly they are reprogrammed to only target and fight against leukemia cells.

Gene editing is a type of genetic engineering in which DNA is inserted, deleted, repaired or replaced from a precise location in the genome. The most fundamental challenge of gene editing is the need to specifically and efficiently target a precise DNA sequence within a gene. Cellectis claims to be capable of editing any gene with highly precise insertion, deletion, repair and replacement of DNA sequences. Cellectis’ nucleases, including a particular class of proteins derived from transcription activator like effectors, act like DNA scissors to edit genes at precise target sites and allow for the design allogeneic CAR T-cells. 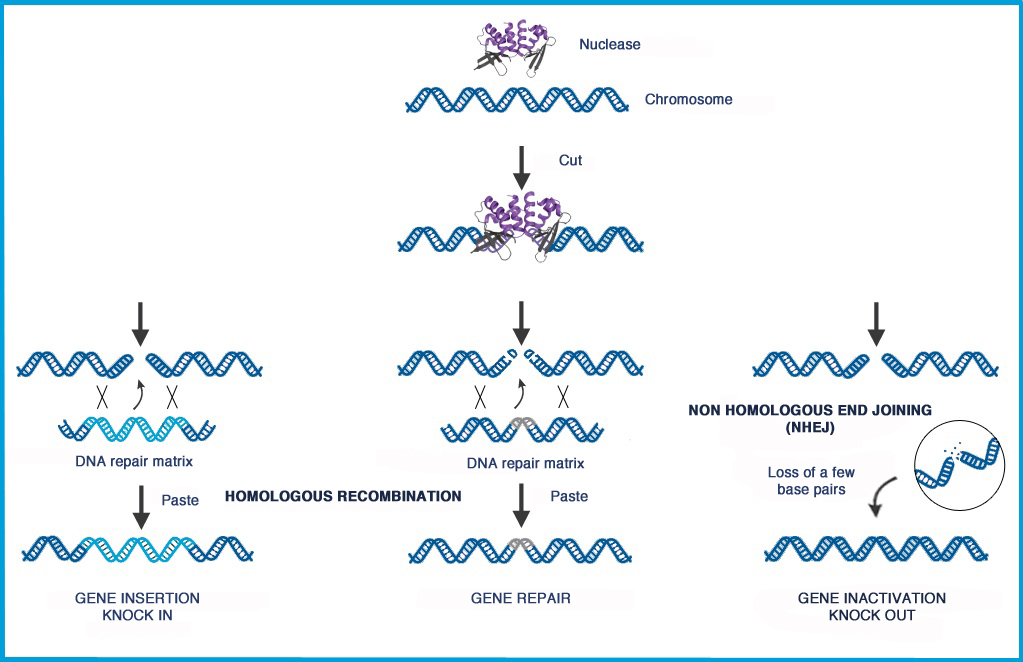 Gene editing also enables the development of products that feature additional safety and efficacy attributes, including control properties designed to prevent them from attacking healthy tissues, to enable them to tolerate standard oncology treatments, and to equip them to resist mechanisms that inhibit immune system activity.

In the case of Layla, the Chimeric Antigen Receptor that was engineered into the donor T-cells is responsible for the targeting of the CAR T-cell to her leukemia. This could be accomplished with a CAR that binds to CD19, for example. 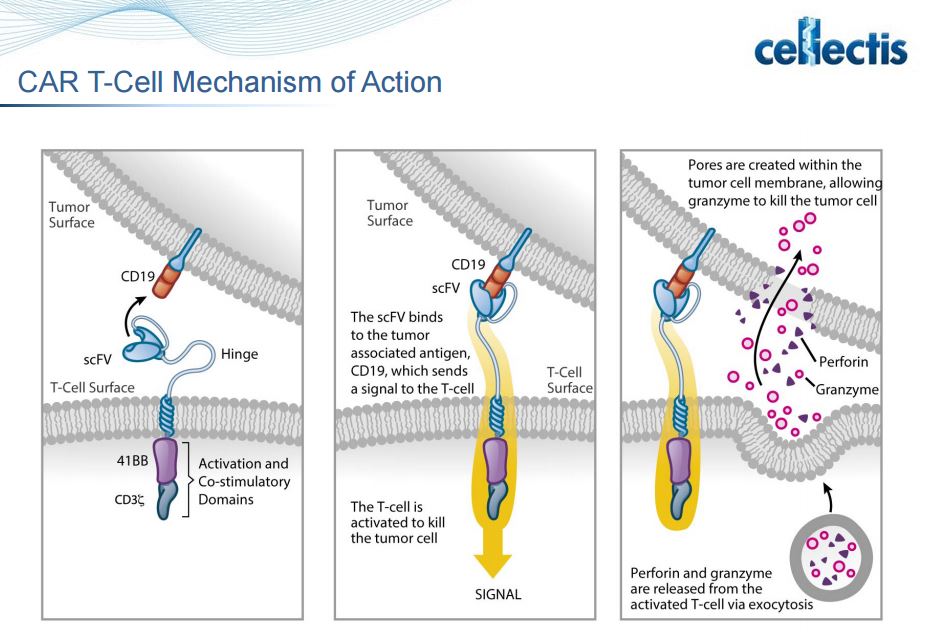 The cells were also engineered in a way to protect them from chemotherapy that is used to kill cancer cells, namely fludarabine. The modification entails blocking deoxycytidine kinase, which is needed to convert fludarabine into its active form. Fludarabine is a prodrug that is converted to the free nucleoside 9-beta-D-arabinosyl-2-fluoroadenine (F-ara-A) which enters cells and accumulates mainly as the 5′-triphosphate, F-ara-ATP. The rate-limiting step in the formation of triphosphate is conversion of F-ara-A to its monophosphate, which is catalyzed by deoxycytidine kinase. Although F-ara-A is not a good substrate for this enzyme, the high specific activity of this protein results in efficient phosphorylation of F-ara-A in certain tissues. F-ara-ATP has multiple mechanisms of action, which are mostly directed toward DNA. These include inhibition of ribonucleotide reductase, incorporation into DNA resulting in repression of further DNA polymerisation, and inhibition of DNA ligase and DNA primase. Collectively these actions affect DNA synthesis, which is the major mechanism of F-ara-A-induced cytotoxicity. 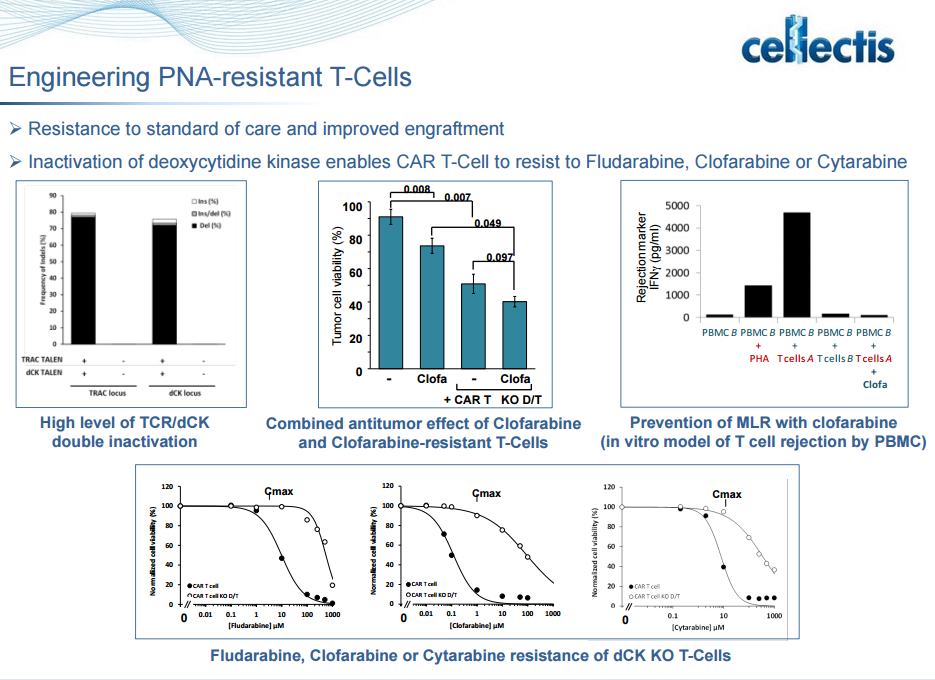 Compatibility with concurrent oncology treatments. We are designing our T-cell product candidates to be compatible with standard oncology treatments, including steroids and drugs such as alemtuzumab, fludarabine and clofarabine, that otherwise impair or destroy T-cell functions or act as lymphodepleting agents that target the patient’s cancer cells and weaken the immune system.

Importantly, the T-cells were from donors, not autologous. This reduces the logistical complications associated with other CAR T-cell approaches.