CAR T-cell is a form of ADOPTIVE immunotherapy in which T-cells from a patient that are still in an “activatable” form are genetically engineered to express a T-cell receptor that targets a cancer antigen of choice.  This approach bypasses the mechanisms by which cancer cells evade and launch counter attacks against the immune system – recruitment of T-reg cells, secretion of IDO (indoleamine-2,3,-dioxygenase), expression of checkpoint control molecules (PD-L1, PD-L2, CTLA4, and LAG-3), and tolerization.

By starting with T cells that are capable of being activated (upon antigen binding) and engineering T cell receptors for selected antigens, chances are great that the cancer has yet to develop anti-CTL responses to the specific antigen identified by the CAR binding domain, therefore, the cancer can be effectively eradicated with CAR T-cells. 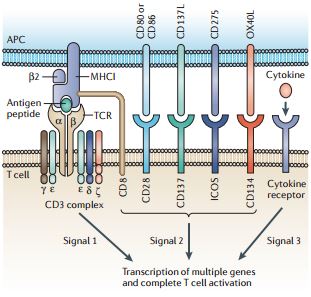 Many different T cell receptors (TCRs) are generated by genetic recombination during T cell development, such that each T cell generally expresses a single type of TCR. Activation of a naive T cell is initiated by the interaction of its TCR with a peptide antigen displayed by major histocompatibility complex (MHC) molecules on the surface of antigen-presenting cells (APCs). This interaction occurs in an immunological synapse, involving various molecules, which forms between T cells and APCs. As a result of this interaction, TCR-associated molecules, including CD3ζ, transmit a primary activating signal, which is termed signal 1 (see the figure). This signal alone is insufficient to fully activate T cells, which require co-stimulation that is mediated by the interaction of one or more T cell co-stimulatory receptors with their ligands expressed on APCs. These co-stimulatory signals are collectively known as signal 2. Co-stimulatory receptors include CD28, CD27, CD137, CD134 and inducible T cell co-stimulator (ICOS). T cells also express co-receptors, either CD4 or CD8, that recruit leukocyte C terminal SRC kinase (LCK) to the immunological synapse to enhance T cell activation. Further promotion of activation and growth is provided by cytokines through the engagement of cytokine receptors on T cells to deliver what is referred to as signal 3. http://www.nature.com/nrc/journal/v13/n8/full/nrc3565.html 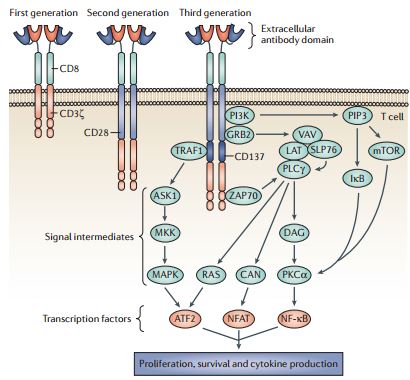 Early results are very impressive; significant and durable clinical responses in end stage cancer patients have been seen.  The therapy is so active and potent that cytokine storm, the release of cytotoxic cytokines from immune cells when encountering antigen, has caused significant morbidity and even several deaths.

The main problem with the approach is that it requires phlebotomy, leukapharesis, and remote ex vivo processing of cells, and re-infusion – see diagram (www.uphs.upenn.edu).  However, not only is this feasible, Dendreon, with its pioneering work with Provenge, has shown the world that a marketed product based on ex vivo cellular processing can be advanced.  (Provenge involves removing dendritic cells from patients and exposing them to a fusion protein of PAP – prostatic acid phosphatase – and GMCF – granulocyt stimulating factor).

Cellectis’ approach simplifies the process, however. in that it employees allogeneic T cells so that multiple patients can be treated with cells processed from a single patient.  The deal with Pfizer includes over 2 dozen cancer targets.

This is a very exciting space made more exciting by Pfizer’s entrance.