Opdivo (nivolumab – BMS) and Cometriq (cabozantinib -Exelixis) demonstrated positive results in studies of patients with kidney cancer. Renal cell carcinoma is the most common type of kidney cancer in adults, accounting for more than 100,000 deaths annually. Globally, the five-year survival rate for those diagnosed with metastatic, or advanced kidney cancer, is 12.1 percent.

In the case of Opdivo, CheckMate-025, an open-label, randomized Phase III study evaluating Opdivo (nivolumab) versus everolimus in previously-treated patients with advanced or metastatic renal cell carcinoma (RCC) was stopped early because an assessment conducted by the independent Data Monitoring Committee (DMC) concluded that the study met its endpoint, demonstrating superior overall survival in patients receiving Opdivo compared to the control arm.

Cometriq hit its primary endpoint of besting standard everolimus in extending the lives of patients with renal cell carcinoma already treated with a VEGF inhibitor. In top-line results, Exelixis’ treatment charted a statistically significant increase in progression-free survival compared to everolimus, sold by Novartis ($NVS) as Afinitor, and reduced the relative risk of tumor growth or death by 42%. 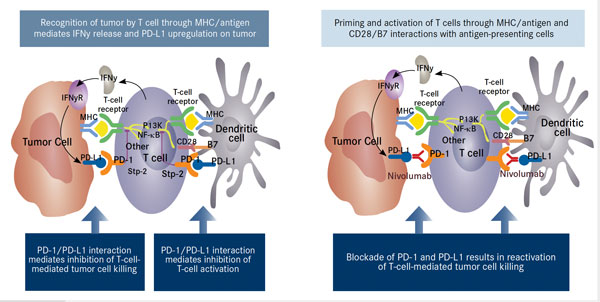 PD-1 is a cell–surface receptor belonging to the CD28 family of T-cell regulators that is expressed on activated T cells and other immune cells. Upon interaction with its ligands, PD-L1 and PD-L2, it initiates an inhibitory signaling network that switches off activated T cells and results in T cell exhaustion—a state of dysfunction that is defined by poor effector function, even in the presence of antigens. – See more at: http://www.onclive.com/publications/Oncology-live/2015/January-2015/PD-1-Pathway-Blockade-May-Shape-the-Future-of-Hodgkin-Lymphoma-Therapy#sthash.j5kURX8r.dpuf

Cabozantinib is an anticancer drug for inhibiting tumor growth, angiogenesis and metastasis. It is orally bioavailable and has a potential anti-neoplastic activity. The small anti-cancer compound targets multiple receptor tyrosine kinases (RTK) including the vascular endothelial growth factor receptor 2 (VEGFR-2) and hepatocyte growth factor receptor (MET). They are responsible for development and progression of many cancers.

Hepatocyte growth factor (HGF / scatter factor – SF) induces the epithelial-mesenchymal switch via loss of E-cadherin. This is the first step in motility and invasion. HGF binds to the MET receptor triggering a signal transduction cascade, which cabozantinib inhibits. 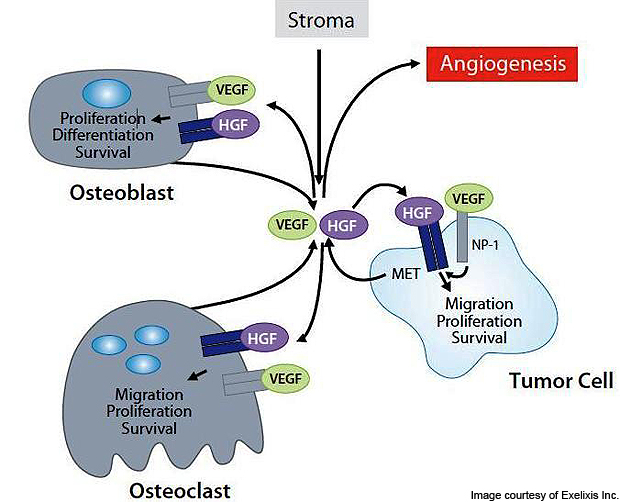 Cabozantinib won approval in 2012 to treat a rare form of thyroid cancer, the first step in what Exelixis hoped would be a string of regulatory successes that would expand its indications. But two years later, cabozantinib missed its primary endpoint in a big Phase III trial in prostate cancer, roughly halving Exelixis’ market cap and leading the biotech to lay off about 70% of its workforce and shift its bets to kidney cancer. The top-line success in renal cell carcinoma sent Exelixis’ shares up as much as 50%.

Cometriq and Opdivo represent just two of the most exciting pathways that have been elucidated in cancer development over the past 10 years. 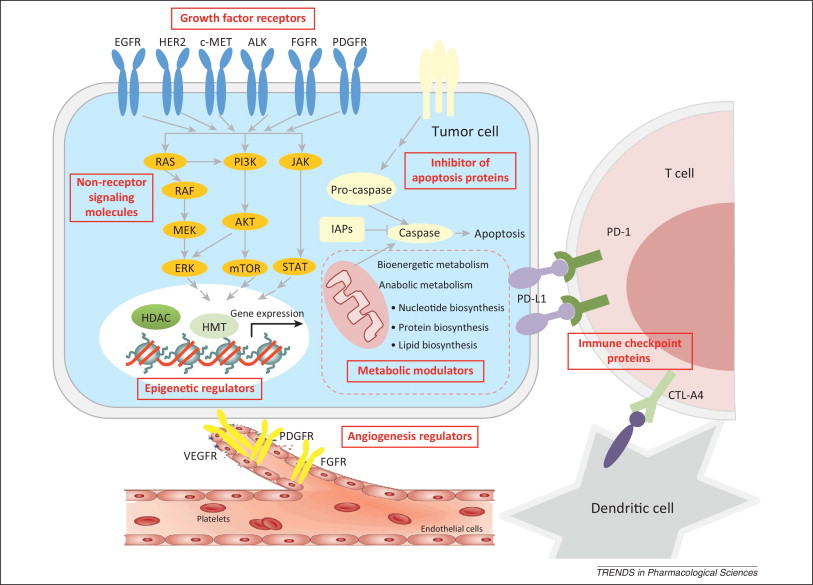 The increasing understanding of cancer biology in the past decade has resulted in an explosive growth of targets explored for drug discovery. Currently, anticancer drug discovery is pursuing almost all the essential events for cancer cell survival and progression. Among them, growth factor receptors and non-receptor signaling molecules, which drive cancer cell survival, proliferation, and progression, represent the largest class. Indeed, the initial success of targeted therapy was seen in this area, with receptor tyrosine kinase family members EGFR and HER2 and nonreceptor tyrosine kinase Bcr-ABL. This field continues to be the most promising and actively pursued direction in anticancer drug discovery, including the recent excitement in targeting ALK and BRAF. Other promising targets include receptors, such as MET, FGFR, PDGFR, and non-receptors, such as PI3K, AKT, and MEK. Another important class of targets is angiogenesis modulators, such as VEGFR and PDGFR, which work to reduce blood supply to the tumor. Clinical anti-angiogenesis compounds include bevacizumab, sorafenib, and sunitinib. However, further development of this class is less active, probably due to the toxicities of these compounds. Inhibitors of apoptosis proteins (IAPs), the central mechanisms of which involve direct caspase and pro-caspase inhibition (primarily caspases 3 and 7) and modulation of transcription factor nuclear factor (NF)-kB, have probably been the longest pursued avenue for targeted drug discovery. However, clinical translation of this class of targets has proved difficult, and none of the candidates has gained approval for clinical use. The difficulty may arise from very limited approaches available, mostly peptide mimics, to effectively affect this class of targets. Lately, epigenetic enzymes that regulate global gene expression are emerging as an intriguing class of targets, such as histone deacetylase (HDAC) and histone methyltransferase (HMT). Past efforts have leaned heavily on targeting HDAC, and two HDAC inhibitors, vorinostat and romidepsin, have been approved for clinical treatment. The trend appears to be shifting to other chromatin remodeling factors such as methyltransferase EZH2 and DOT1, and protein–histone association, such as bromodomain proteins. In addition, the metabolic rewiring of cancer cells has been viewed as a promising source of novel drug targets. Increasing interest is drawn to enzymes and coenzymes implicated in bioenergetic and anabolic metabolism, although it might be too early to conclude the therapeutic chances of this area. The most recent exciting success in targeted therapy has occurred with the blockade of immune checkpoint molecules, including CTLA-4, PD1, and PD-L1. The striking clinical benefits of this strategy have inspired in-depth discussions about revisiting cancer immunotherapy, which may bring targeted cancer therapy into a new era. http://www.sciencedirect.com/science/article/pii/S0165614713002204