Immunocor raised $320MM in a private financing round to support its anti-cancer platform. That’s a lot of money for a single financing – in fact, it is the largest private fundraising by a European biotechnology company. What’s the attraction?

The company is developing T-cell receptor (TCR)-based therapies, with particular focus on its most advanced drug candidate, IMCgp100, which yielded positive results in early-stage trials involving about 60 patients with advanced metastatic cutaneous and ocular melanoma.

The technology employs the T-cell receptor that has been modified to target cancer antigens with increased affinity. Use of the T-cell receptor, as opposed to an antibody, permits the interaction of various co-stimulatory molecules to enhance binding and effector cell functioning. The other end of the complex is an anti-CD3 antibody fragment, which binds to cytotoxic T-cells to effect cancer killing. To enhance the stability of the complex, a linker is used to bridge the two bi-functional ends.

The first product targets the gp100 protein that is expressed on melanoma. Immunocore unveiled a collaboration to assess the efficacy of IMCgp100 together with Eli Lilly’s galunisertib and merestinib in the treatment of melanoma, following a similar pact with AstraZeneca’s MedImmune unit to develop IMCgp100 in combination with the experimental checkpoint inhibitors MEDI4736, which targets PD-L1, and/or tremelimumab, which targets CTLA-4, for metastatic melanoma. Immunocore also has partnerships with GlaxoSmithKline and Roche.

In April 2015, early clinical data were made available:

In a cohort of 14 patients who were of either positive or unknown gp100 status, treated with the weekly regimen in the Phase IIa portion of the trial, there were four objective clinical responses, including one complete response, lasting 4.7 months, and three partial responses, lasting 5.9 – 18+ months, including in a patient refractory to ipilimumab.

Responses were durable, with two partial responders continuing 18+ months. Importantly, two of the objective responses, one complete and one partial, were observed in the only two patients enrolled in the expansion cohort with ocular melanoma. This encouraging clinical activity suggests that ocular melanoma is an important subgroup of melanoma for IMCgp100 based on the high unmet need in this indication. 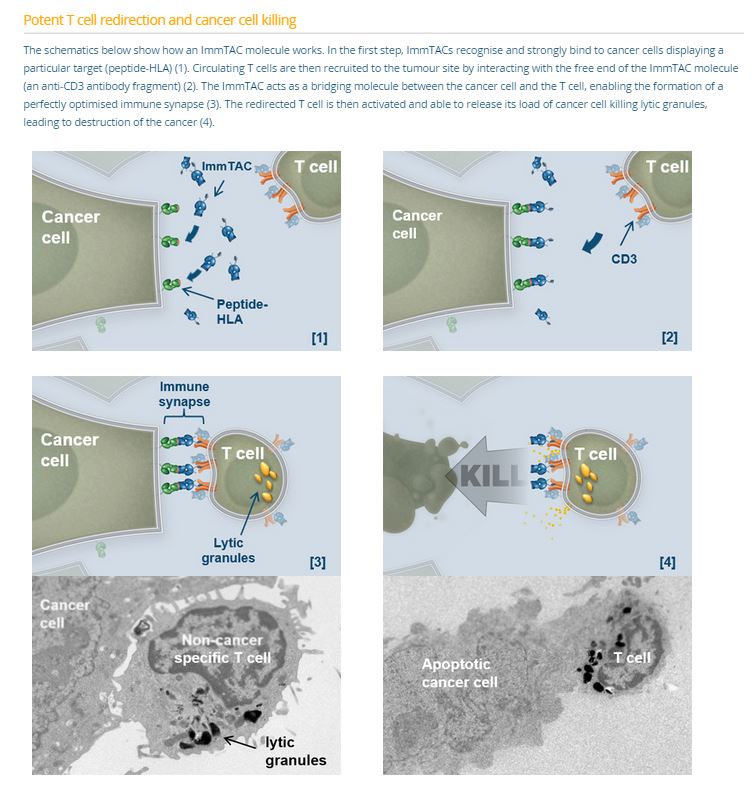 Adaptimmune also has a T-cell receptor-based platform technology – the company’s treatment is based on a proprietary technology through which Adaptimmune can extract a patient’s own T cells, which the immune system uses to fight infection, and rewire them to better detect cancer. Once scientists have equipped those T cells with tumor-philic receptors, they are re-injected into patients, ideally spurring a broad immune response against cancers that previously passed undetected.