Cancers are tumors that cross the basement membrane and develop invasiveness, the ability to intravasate into blood vessels, and then to colonize and grow at distant sites. Complex heterotypic cellular interactions inside the tumor are responsible for this. 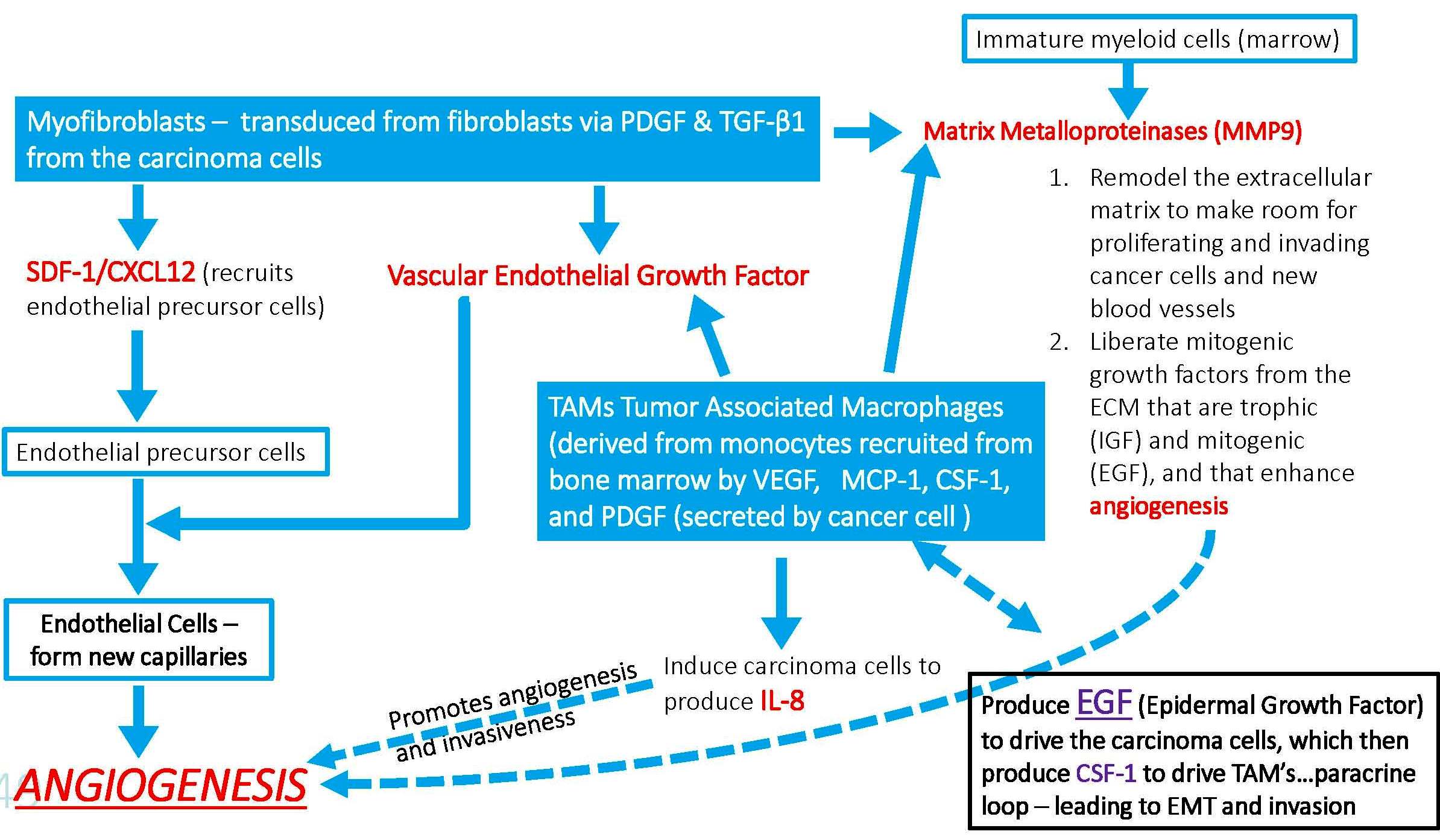 Interactions between tumor cells and their microenvironment are critical at all stages of tumor development and metastasis. Many of the non-cancerous cells that comprise the tumor microenvironment originate from the bone marrow, including tumor-associated macrophages (TAMs). (Model by Hao-Wei Wang, Joyce lab.) 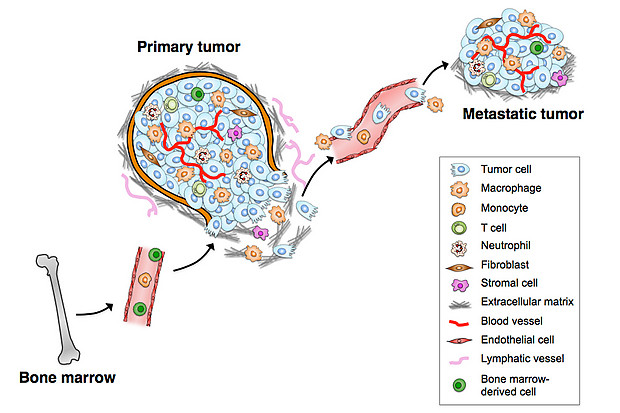 TAMs interact with tumor cells that undergo the EMT (epithelial-mesenchymal transition) and gain access to blood vessels, becoming circulating tumor cells (CTCs). Tumor-associated macrophages (TAMs) are specialized differentiated macrophages found within most tumors, which can be used as prognostic indicators of either tumor invasiveness or tumor suppression. TAMs, recruited to the stroma from circulating monocytes, are required for tumor cell intravasation, migration, extravasation, and angiogenesis. Tumors attract monocytes via chemoattractants (e.g., MCP-1, CCL-2). In turn TAMs secrete cytokines and growth factors (e.g., MMP-1, CXCL12) which stimulate tumor cells with the potential to become circulating tumor cells (CTCs). TAMs and CTCs then migrate via the lymphatic system or intravasate across intratumor capillary barriers into peripheral circulation.

But do TAMs and cancer cells continue to interact with each other outside of the primary tumor microenvironment?

It is believed that newly-discovered Cancer-Associated Macrophage-Like  (CAML) cells are TAMs that accompany cancer cells into the circulation. The evidence of this includes the following:

CAMLs were seen only in cancer patients –

CAMLs are involved in the phagocytosis of cancer cell debris  –

Chemotherapy, but not endocrine or nontherapy, was associated with high CAML levels. We find that nontreated and hormone-treated patients who should show little change in tumor size have low CAML numbers, fewer than 3–4.1 per 7.5-mL sample. Conversely, when a chemotherapeutic regime was in use, CAML numbers averaged 29 per 7.5-mL sample. The lack of changes seen with hormone therapy and the substantial increase upon implementation of chemotherapy indicate that the mechanism for CAML phagocytosis and/or release into circulation is affected specifically by therapy type. Additionally, these data suggest that CAMLs may provide a sensitive representation of phagocytosis at the tumor site that could quantify a cell-specific innate immune reaction to the extent of cellular debris caused by chemotherapy.

We analyzed CAMLs isolated from patient samples for evidence of a CTC/CAML interaction. CTCs were found bound to CAMLs in 4 of 79 patients, all with metastatic disease. In addition, 4 of 79 patients had CAMLs with engulfed cells that appeared to have an epithelial phenotype and an amplified mutation genotype matching the primary tumor. The observed interaction of a dual CTC/CAML pair in 10% of patients is indicative of two possibilities. The first is that these cells interact while in circulation, implying that CAMLs are an active immune response to cancer cells in circulation. Alternatively, these cells might bind at the tumor site and disseminate together into circulation, implying a similar pathway of intravasation. In either case, this pairing of cells is more common than expected, and although there is no evidence implying facilitation or hindrance of the bound CTCs, this observation does suggest that CAMLs may play some participatory role in the migration of cancer cells in the peripheral blood of cancer patients. 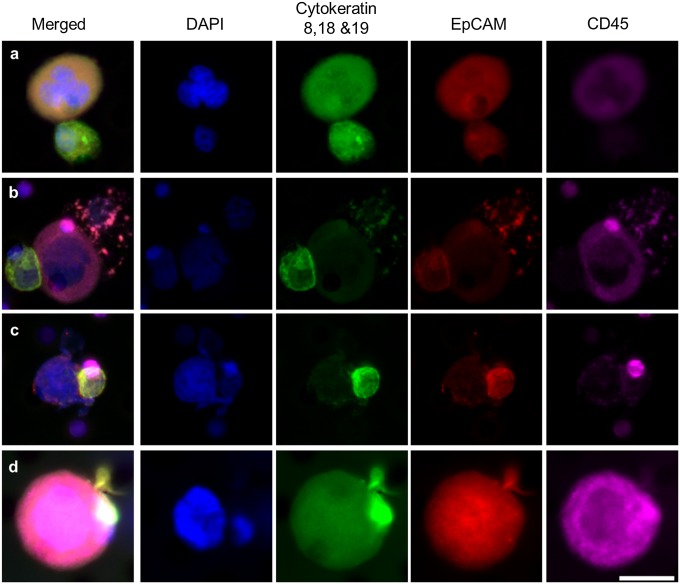 CAMLs interacting with CTCs in patient blood. Images from left to right show a merged image of DAPI, cytokeratins, EpCAM, and CD45 immunostains and images staining for individual markers. CTCs are filamentous cytokeratin-positive and CD45− cells (Fig. S7). CAMLs are the large CD45+ cells. CTCs and CAMLs were observed with varying levels of interactions. (A) Loose association of a CAML cell (above) and CTC (below). (B) CAML cell (center) bound to a CTC (far left) and an apoptotic cell (far right). (C) Attachment with membranes fusing (image includes a CD45+ blood cell behind the CTC, top right). (D) Engulfment of a putative CTC within the CAMLs cytoplasmic area. (Scale bars, 20 µm.)

Collectively, these data point to using CAML assays as “liquid biopsies” for the diagnosis, staging and monitoring of patients with cancer:

Although only observational, these data provide clinical evidence that proangiogenic cells migrate bound to CTCs. Using these clinical observations, we suggest a theory linking intravasation, migration, and extravasation of CTCs via a single macrophage interaction. Furthermore, we believe these data indicate the complexity of interactions between cancer cells and innate immune cells and suggest that the detection, characterization, and monitoring of the various cellular components present in the peripheral blood of cancer patients are essential elements in the comprehensive biological characterization of solid tumors. Establishing rigorous criteria for the evaluation in monitoring the “liquid phase” of solid tumors would represent an important future approach, potentially useful in the selection and monitoring of standard systemic therapies or combined with more innovative immunotherapies.