Aduro Biotech just signed a $750MM ($200MM of which was up-front) deal with Novartis for the development of modulators of the STING pathway to enhance the immunogenicity of cancer cells.

The rationale behind the collaboration is to combine STING pathway agonists to fully activate the immune system so that when combined with checkpoint inhibitors (e.g., anti-PD1 – Opdivo and Keytruda; anti-PDL1; LAG3; and TIM3) an enhanced response will be seen. Many cancers are resistant to therapy with checkpoint inhibitors, which cancel anti-cancer immune suppressive responses, because there is an insufficient initial anti-cancer response. STING agonists have the potential to augment, initiate, or awaken the initial anti-cancer response.

Aduro has developed cyclic dinucleotides that precipitate robust STING pathway triggering. Cyclic dinucleotides (CDNs) are small molecules – naturally expressed by bacteria and immune cells – that are known to activate the STING (Stimulator of Interferon Genes) signaling pathway in immune cells. STING is known to be a central mediator of innate immune response and, when stimulated, induces the expression of various interferons, cytokines and T cell recruitment factors that amplify and strengthen immune activity. 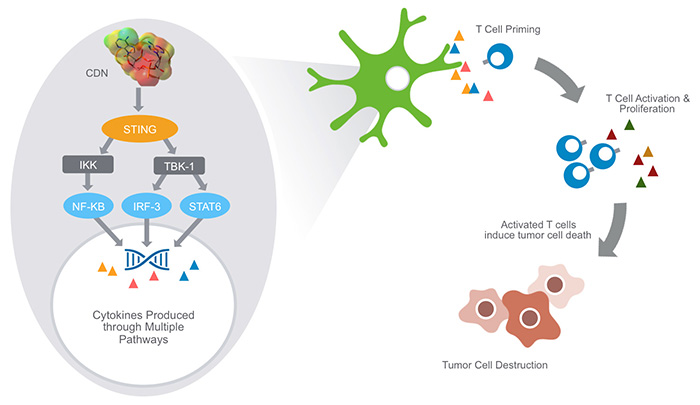 Aduro’s proprietary CDNs have shown promising therapeutic activity in preclinical testing. These small molecules may have value as a monotherapy, delivered in proximity to tumor sites to re-stimulate immune system recognition of and response to cancer cells.

Studies from the University of Chicago showed that when activated, the STING pathway triggers a natural immune response against the tumor. This includes production of chemical signals that help the immune system identify tumor cells and generate specific killer T cells. The research also found that targeted high-dose radiation therapy dials up the activation of this pathway, which promotes immune-mediated tumor control.

STING, short for STimulator of INterferon Genes complex, is a crucial part of the process the immune system relies on to detect threats — such as infections or cancer cells — that are marked by the presence of DNA that is damaged or in the wrong place, inside the cell but outside the nucleus.

Detection of such “cytosolic” DNA initiates a series of interactions that lead to the STING pathway. Activating the pathway triggers the production of interferon-beta, which in turn alerts the immune system to the threat, helps the system detect cancerous or infected cells, and ultimately sends activated T cells into the battle.

“Innate immune sensing via the host STING pathway is critical for tumor control by checkpoint blockade,” Gajewski’s team noted in their paper. They found promising drugs known as checkpoint inhibitors — such as anti PD-1 or anti PD-L1, which can take the brakes off of an immune response — were not effective in STING-deficient mice. New agents that stimulate the STING pathway are being developed as potential cancer therapeutics.

The second University of Chicago team, led by cancer biologist Yang-Xin Fu, MD, PhD and Ralph Weichselbaum, MD, chairman of radiation and cellular oncolog,y found that high-dose radiation therapy not only kills targeted cancer cells but the resulting DNA damage drives a systemic immune response. In mice that lacked STING, however, there was no therapeutic immune response. The induction of interferons by radiation and consequent cancer cell killing, they conclude, depends on STING-pathway signaling.

The STING pathway is part of the innate immune response against pathogens – the presence of cytosolic DNA triggers the pathway, which in turn, leads to autophagy of the host cell. The production of IFN’s lead to CD8+ specific anti-cancer T-cells.

By what mechanisms can DNA gain access to the cytosol of DCs under physiologic conditions in vivo?